Why is Iran’s stock exchange falling under President Hassan Rouhani and after the easing of sanctions? 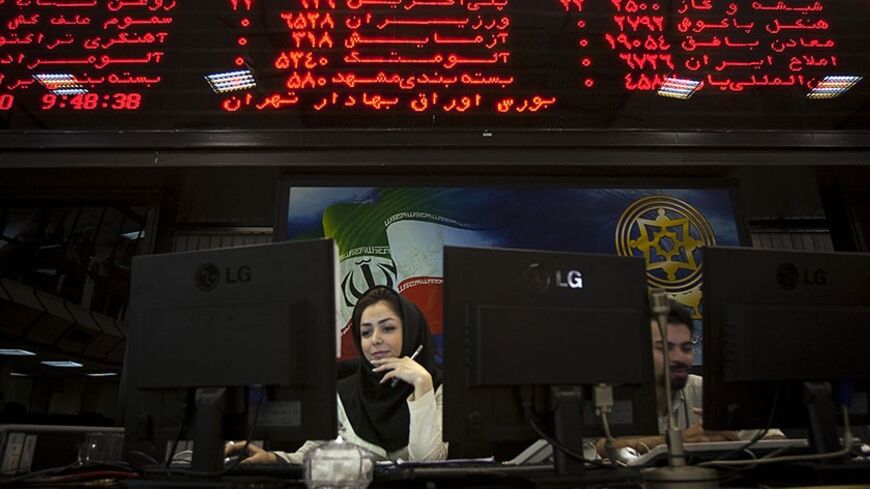 An Iranian official works at her desk in the main hall of the Tehran Stock Exchange, Aug. 3, 2010. - REUTERS/Morteza Nikoubazl

The Tehran Stock Exchange (TSE) is making news in Iran for all the wrong reasons. It's falling, and fast. Its main index peaked at 89,500 points on Jan. 5 of this year. Then it started to fall. By Jan. 26, it had fallen to 81,905 points. At one point, its dive was described as "historic."

A loss of 7,595 points within three weeks (almost 7%) is a lot for any stock exchange, especially the TSE, one of the fastest rising in the world. In mid-August 2010, it crossed the 16,000 points threshold and that was considered major news. Now, despite the recent falls, its value is almost 400% higher than then.

What has been particularly amazing about the TSE is that over the last several years its rise has defied many laws of economic gravity.

Perception of an economy's future well-being plays an important part in the investment decisions of potential stockholders and buyers. So when inflation is up, unemployment is rising and tough sanctions are imposed, you would expect the TSE to fall. However, in Iran, the opposite has happened on numerous occasions. For example, on Jan. 23, 2012, the European Union imposed sanctions against Iran’s biggest export, oil. In a year, the TSE’s main index had risen from 25,540 points on Jan. 25, 2012, to 36,723 points registered on Jan. 27, 2013. That's a total rise of 11,183 points or 43%, during some of the darkest days of Iran’s economy under President Mahmoud Ahmadinejad.

The TSE continued to rise, including immediately after Hassan Rouhani was elected president, as many expected the economy to improve.

And now? In Tehran, hotels rooms are booked solid with European businessmen. There is so little room available that some foreigners have to go to Dubai to arrange business meetings with Iranians. "Sexy" oil contracts are expected to be offered to foreign oil companies. Foreign dignitaries are visiting Iran in higher numbers than at any time during the last eight years, and this is going to increase. Rouhani is being welcomed in Davos, while some of the sanctions against Iran’s petrochemical companies are being lifted as part of the Geneva deal. In the middle of all the recent improvement in perceptions about Iran’s economy, you would expect the TSE to rise even further. Instead, it tanks. Just what is going on?

Reports from Iran vary. The online publication Tabnak (affiliated with former Islamic Revolutionary Guard Corps (IRGC) commander and presidential candidate Mohsen Rezai) places some of the blame on the rumors it says have caused investors to lose confidence in the TSE. Some rumors suggest that the head of the TSE will be changed, while others suggest some of the other managers at the TSE are in trouble with the authorities. Meanwhile, the Tehran-based Iranian Students' News Agency places the blame on rumors of money laundering as well as uncertainties over raw materials for petrochemical companies.

These are all valid possibilities that could explain the recent fall. So is the possibility that the TSE was ripe for a readjustment after creating a bubble.

However, the question remains: Why is this all happening now? Rumors also existed during the Ahmadinejad era and so did inflation, which hurt many Iranian companies. One could also say that the TSE was also inflated under his term. So why is it that the TSE did not drop then, as its doing now?

Again, there are several factors and assumptions that could explain this.

One of these is that during Ahmadinejad's administrations, there were not many places where Iranians could invest, so they turned to investing in the TSE. This especially includes Iranians with money abroad who were forced to close their bank accounts because of the sanctions and bring their money back to Iran. Some of this money made it to companies listed on the TSE, thus leading it to rise despite the negative perception of the economy back then. Now that Rouhani is in charge and some of the sanctions are being lifted, there are new destinations for investment other than the TSE, thus causing some investors to move their money elsewhere.

Another important factor that should not be overlooked is corruption and insider dealing. According to Transparency International, out of the 175 countries surveyed in 2013, Iran was the 144th least corrupt country (the first, the least corrupt, was Denmark). In fact, Iran became more corrupt in 2013 compared to 2012. Corruption also impacts the TSE, as its management and the government are sensitive to such reports — so much so that a news site in Iran was blocked after it published a story about corruption at the TSE on Sept. 3, 2013. It was only allowed to run again after it agreed to withdraw the claim. At the same time, there have been numerous reports about high levels of corruption during the privatization scheme, which placed some of the country's former publicly owned companies on the TSE.

With corruption and the IRGC being a major player in the TSE through affiliate companies, the possibility that someone is playing with the numbers for their own political and financial benefit cannot be ruled out, either.

The management of the TSE is not transparent. Although it has tremendous potential for growth, the ailment of siyasat bazee, playing politics, that has inflicted Iran’s economy in other areas could also impact the TSE’s long-term growth and more importantly, its credibility.