Is the continuing plunge in the Iranian rial due to more than the US-led sanctions? Mohammad Ali Shabani argues that these may also have become a convenient scapegoat as President Ahmadinejad consolidates control over sectors of the Iranian economy, including its currency market. 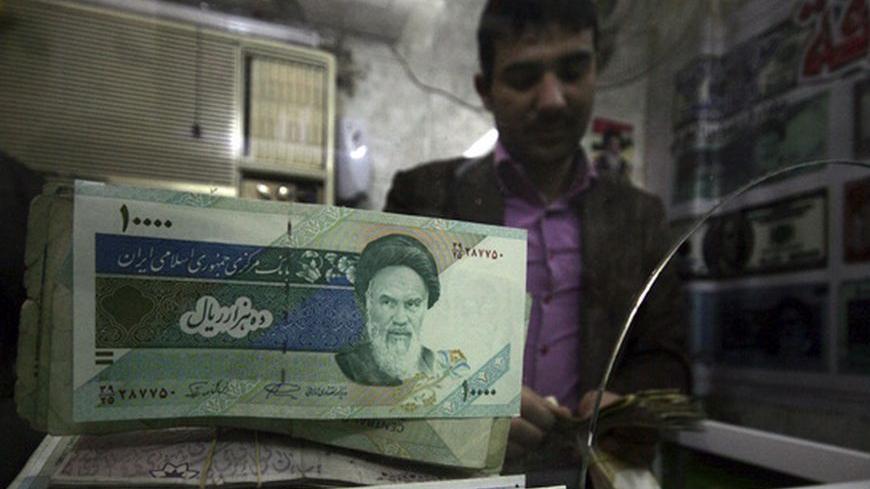 Iranian rial banknotes are seen at a currency exchange shop in Kerbala, south of Baghdad on Jan. 27, 2012. In the money changing shops here, Iraqi merchants joke that banknotes from neighbouring Iran and Syria are only worth plastering on windows as decorations. - REUTERS/Mushtaq Muhammed
September 15, 2012

The Iranian rial, after plunging 18% in just three days, hit an all-time low against the US dollar this week [Sept. 10]. But despite conventional wisdom, there are other factors behind this sudden drop besides the growing impact of U.S.-led sanctions on Iran.

Although Western-led sanctions have made Iran’s nuclear drive increasingly costly, the rial plunge may also be the firing shot of a broad effort by the Mahmoud Ahmadinejad administration to use the punitive measures as a cover to gain control over more sectors of the Iranian economy. This move may go hand in hand with a wider effort to deflect blame for the country’s economic malaise. The rial drop came only days after the Iranian president acknowledged the adverse effects of the sanctions on live TV after having largely denied such effects for years.

In analyzing Iran’s currency gyrations, four facts about the Iranian government’s finances should be kept in mind:

First, Iran’s economy is relatively diversified. Oil exports only accounted for 21% of Iran’s GDP last year compared with 30% to 50% among most Arab Persian Gulf states.

Second, Iran is reducing its reliance on oil sales.  The Vienna-based consulting firm Atieh International estimates that crude exports will make up 41.5% of the budget this year, compared with 53% in 2010.

Third, Iran doesn’t owe a lot of money. Tehran’s low level of general gross debt — around 10% of gross domestic product compared with over 100% in America — makes it well-positioned to absorb oil revenue losses and budget deficits brought on by Western sanctions.

Fourth, the Islamic Republic is not short of foreign exchange. Iran is estimated to have earned 47% of its total oil income in the past 103 years in the 7 years since Ahmadinejad took office in 2005. That’s over $500 billion. According to the International Monetary Fund, Iran has over $100 billion in foreign exchange reserves, enough to pay for well over a year of imports.

So why has the Iranian currency market been so volatile and who is to  blame?

All signs point to the Ahmadinejad administration being the culprit. While sanctions have intensified the rush to non-rial safe havens, that rush is largely caused by the inflation triggered by the government’s subsidy reforms and its aversion to high interest rates. With rial accounts paying interest far below inflation, households and investors have turned to “safe” assets such as foreign exchange, gold and property.

There are also indications that the Ahmadinejad administration intentionally sought to trigger and expand the gap between the official and free-market rates of the rial. Why? The Iranian government sells oil in foreign currencies. The weaker the rial becomes, the more rials you get for your petrodollars.

By increasing the forecast price per barrel in the budget — and planning a  second devaluation this year, partly justified by the growing divergence between official and market rates — the Ahmadinejad administration is set to receive a high amount of rials for a decreasing number of petrodollars.

There are other dimensions to the issue of the rial’s devaluation. The arbitrage between the official and free-market rates offers handsome profits to those with access to government dollars. Moreover, it provides the government with an unconventional method to fill any holes in its budget not covered by the mechanisms outlined above.

Also, as witnessed during the past year, the value of the rial closely follows developments related to Iran’s nuclear energy program.

Around the time of the nuclear talks in Istanbul and Baghdad earlier this year, the rial rapidly rose around 15% against the dollar. Word on the streets of Tehran was that Ahmadinejad’s team was flooding the market with cheap dollars to build public pressure for a nuclear deal.

Getting the Americans to recognize the Islamic Republic and cut a deal with Washington has been a prize many Iranian presidents have coveted. Considering that his time in office is running out, Ahmadinejad can’t be blamed for wanting to boost his legacy.

All this explains the rial’s ups and downs over the past year and a half — but not its sudden collapse over the weekend. The answer to that mystery most likely lies in the question of the future of the Iranian currency market.

Earlier this month, the deputy minister of economic affairs and finance told reporters that a foreign-currency bourse would be set to start trading on Sept. 21. Considering how much of the foreign-exchange trading in Iran is incredibly opaque and controlled by a few major players, such a bourse would not only draw hidden investors out from the shadows but provide the government with an even more direct way of benefiting from the arbitrage between the official and free-market rial rates. Predictably, Ahmadinejad’s enemies in the old guard — with billionaire Habibollah Asgaroladi leading the charge — have been pushing back against this initiative.

As the rial was plunging last weekend, news surfaced that the government has not been providing official-rate dollars to importers. Some lawmakers now publicly argue that this has intentionally been going on for weeks. This raises the question of whether sanctions are providing a cover for certain state actors to expand their turf and deflect blame for unpopular policies. Whether the sudden rial plunge was a calculated move aimed at rallying public support for a government takeover of the currency market remains to be seen.

Regardless, the drama of the Iranian currency shows that when faced with lemons, Iranian decision-makers have proven themselves capable of making lemonade. And more importantly, while Ahmadinejad has had his wings clipped and is on his way out, he is still a force to be reckoned with.