Iran is not cracking under sanctions, writes Mohammad Ali Shabani, who suggests the Islamic Republic is preparing for extended economic warfare with the West. 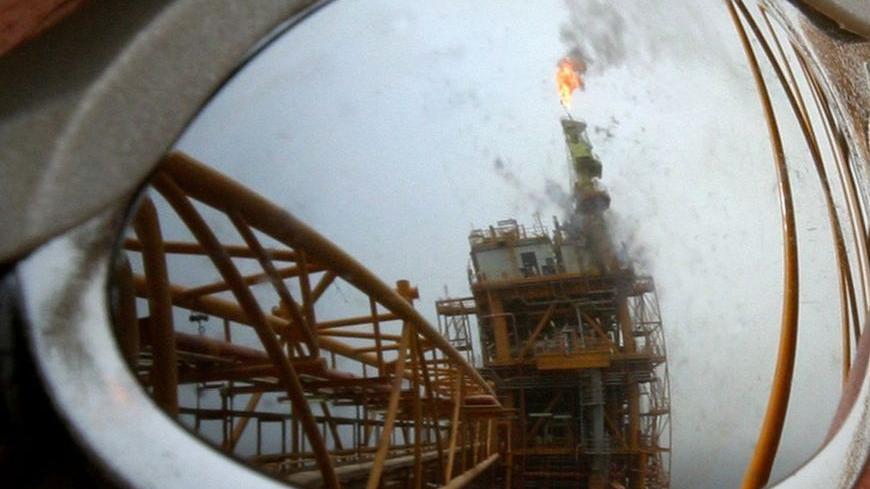 An oil production platform is reflected on the sunglasses of an Iranian worker at the Soroush oil fields in the Persian Gulf, 1,250 km (776 miles) south of the capital Tehran, July 25, 2005. - REUTERS/Raheb Homavandi

Amid the continuing stalemate over Iran’s nuclear program, various narratives have emerged about the sanctions and their impact. The dominant one in Western policy circles and mainstream media is that the sanctions are making Iran crack. This reinforces the view that time is on the side of the Western members of the P5+1 and that concessions Iran deems necessary for progress on the nuclear issue shouldn’t be on the table.

However, a sound understanding of the sanctions’ impact on Iran’s behavior is only possible if the actual situation in Tehran is properly assessed.

To be clear, sanctions have roughly halved Iranian oil exports. Tehran sells around 1 million barrels a day of crude, down from the IEA’s 2.3 mbpd estimate for 2011. How has this impacted Iran’s finances?

The government’s budget for FY 2012/2013 is set at $113 billion, including an allocation of $49 billion in oil revenues. With Brent on course to average $111 a barrel this year, a conservative estimate of average Iranian crude sales of 1.1 million barrels a day suggests Iranian oil revenues of about $45 billion in 2012. To put things into perspective, Iran earned roughly half as much in the beginning of this millenium, when Mohammad Khatami was president.

The reduced oil income has led to a gradual breaking of the taboo on discussion of the impact of the sanctions. Instead of rhetoric on the futility of the measures, a real debate on how to cope with the pressure is taking place in Tehran. Central to this discussion is the budget for the coming fiscal year. Though President Mahmoud Ahmadinejad has once again failed to submit the budget bill before the constitutionally mandated deadline, this may not be the obstructive and confrontational politics of past times.

While all eyes are on the foreign exchange the Iranian government is earning, more attention needs to be paid to the number of rials that hard currency is turned into. In the absence of the official bill from the government, debate has arisen over two key projections which will determine the amount of rials the Ahmadinejad administration will be able to spend in the fiscal year beginning in March 2013.

Given the importance of oil revenues, the government’s budget is based on a projection of the average price per barrel of crude that Iran will sell. This is usually an intentionally conservative estimate, with the surplus channeled into foreign-denominated reserves. Parliament relatively recently moved to stop the government from tapping into these reserves to fund its cash payments to households. Thus, there has logically been a move to boost the government’s coffers by other means. In the current debate on the budget, a commonly cited forecast price per barrel is $90, compared to $85 in the current FY (and $81.5 the year before). The implication of such an increase is that a bigger proportion of total oil revenues will go to the government at the expense of the foreign-denominated reserves.

Another major aspect of the debate is the dollar rate in the budget. This is a crucial topic, since accrued foreign exchange has to be converted to rials for the government’s use. In discussions on the pricing of the dollar in the coming budget, rates of anything between 15,000 to 20,000 rials against the greenback have been brought up. Again, to put things into perspective, $45 billion in oil revenues translates into 551.7 trillion rials with the 12,260 dollar rate in the current budget. With a dollar rate of 17,000 in next year’s budget, the government would get close to 39% more rials per dollar. However, considering the inflationary effects of a too sharp official devaluation, which will directly impact the prices of basic commodities currently protected by the multi-tiered exchange rates, the greenback rate is likely to be set in the lower part of that range.

With a forecast price per barrel of $90, a baseline exchange rate of 16,000 rials against the dollar, and even a gloomy estimate of 800,000 bpd in crude exports, Iran would make 420 trillion rials in crude sales next year. This excludes any earnings from arbitrage between the various exchange rates and oil revenues beyond $90 per barrel.

Consequently, Ahmadinejad’s reticence to deliver the final budget bill is likely to be a means of testing the waters before committing to a final position.

The sanctions are also providing an incentive for the government to trim its expenditures and rationalize the economy. More importantly, there is a lively debate on the long-stated ambition to cut dependence on oil. According to the Vienna-based consulting firm Atieh International, over a third of the government’s budget has been funded by taxes in the past three years. In Tehran, there is consensus that roughly half of the economy is not taxed, and that there are grounds to more than double tax revenues on that basis. While expansion of the tax base is a long-term goal, it is becoming evident that the sanctions are accelerating this process.

Iran is also buoyed by hope that its oil customers will return. There is some evidence to back this optimism. South Korea, the first Asian nation to completely halt Iranian oil imports, has resumed its crude purchases, as has Taiwan. Moreover, Japan is offering sovereign cover for oil shipments from the Islamic Republic, skirting the European Union ban on maritime insurance.

In sum, while sanctions are making the Islamic Republic bleed, it isn’t bleeding near enough to start to question its raison d'être. Instead, things point in the direction of Iran preparing for an extended economic war with the West.

Key to Iranian calculations is not whether it will win, but how far the United States is willing to go. The situation suggests that Tehran is playing the long game of opting to see whether increasingly harsh Western-led measures will slowly lead to a fracturing of the international coalition on board with the Obama administration’s sanctions regime. Signs of tension in this direction are starting to appear. Just the other week, Turkey — which largely pays for Iranian natural gas in gold — clearly pushed back against the latest Senate sanctions targeting exports of precious metals to Iran.

Yet, despite all this, it is important to keep in mind that Tehran is ultimately interested in a final deal on its nuclear energy program. Thus, Western powers would be wise to realize the limited value of blunt instruments such as broad sanctions in the case of Iran. Crucially, the penalties need to start to be used as originally intended — as bargaining chips at the negotiating table. Continued misunderstanding of the effects of the punitive measures and resulting strength/weakness on all sides will only serve to perpetuate the current stalemate.