Ahmadinejad’s Budget Is About Iran’s Elections

Iranian President Ahmadinejad has proposed a budget that empowers the president’s office and shows that he is still up for a political battle in his final months in office, writes Mohammad Ali Shabani. 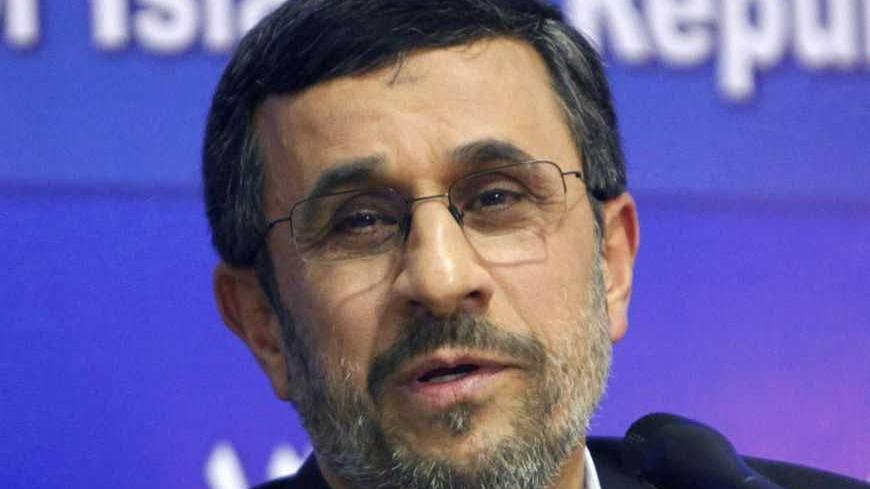 Iran's President Mahmoud Ahmadinejad talks during a news conference at the end of his visit to Cairo, Feb. 7, 2013. - REUTERS/Asmaa Waguih

With some two weeks left until the Persian New Year, details of the Iranian government’s proposed budget bill for the calendar year starting March 21 are being leaked.

Mashregh News, linked to Assembly of Experts chairman Ayatollah Mahdavi-Kani, says the government wants to boost its finances while slashing the budgets of competing power centers.

The administration of Mahmoud Ahmadinejad has reportedly requested a stunning 82% increase in the executive branch’s operating budget. Meanwhile, it has proposed budget cuts of 17% for the Expediency Council (run by former president Hashemi Rafsanjani), 38% for the Supreme National Security Council (chaired by nuclear negotiator Saeed Jalili) and 55% for parliament (headed by Ali Larijani). Strikingly, the government has also requested an effective halving of the budget of the Guardian Council, which vets election candidates and legislation.

Overall, the proposed budget bill — which was customarily delivered late — proposes a 31% increase in spending in rial terms, while anticipating a 40% cut in oil revenues. How can this perceived paradox be reconciled?

As I have argued before, two key projections determine the amount of rials in the government’s coffers.

First, the average price per barrel of crude that Iran will sell. The government’s share of oil revenues increases along with this estimate, as funds earned beyond it is diverted to foreign-denominated reserves. The forecast price per barrel in the current year is $85, and was $81.5 the year before. Officials say the figure in the proposed budget bill is a whopping $95.

Second, there is the dollar rate set in the budget, since the foreign exchange that is earned has to be converted to rials for spending. The baseline conversion rate of the greenback in the current budget is 12,260 rials to each $1. The dollar rate in the proposed bill has been kept secret since its disclosure will reportedly have “political” repercussions and create “problems.” However, what is known is that the government expects some 660 trillion rials from oil sales the coming fiscal year. According to the president’s deputy in charge of budget affairs, this is equivalent to $31 billion. From this, it can be construed that the dollar rate the government has in mind for its budget might be over 21,000 rials. While this is below the rate provided to importers of authorized goods, and far cheaper than on the open market, it has significant repercussions. The baseline rate in the budget is provided to importers of strategic goods such as food and medicine — not to mention many state-owned enterprises. An official 70% devaluation would significantly worsen inflation, although budget issues would be temporarily solved.

Adding to the complexity of the situation, the Ahmadinejad administration has announced a 20% increase in the salaries of civil servants. In parallel, there will apparently be an increase in the government’s trademark cash payments, which were introduced as part of subsidy reforms launched in 2010. This vast increase in money supply is bound to further aggravate the breakneck inflation Iran has seen in the past years.

So what should one make of all these figures and the government’s proposed budget? While many things about the proposed budget are ambiguous and undecided, three things are clear.

Mahmoud Ahmadinejad is not behaving like a person who has given up after having had his wings clipped. His government is aggressively pursuing its long-term ambition to empower the executive branch. A ranking of threats — or list of priority of targets — can be construed from looking at the extent of the proposed cuts in the budgets of various power centers. The manner in which the Expediency Council is not a major target in this sense suggests that Ahmadinejad no longer views Ayatollah Hashemi Rafsanjani as a main rival/threat — at least for now. Instead, parliament — with which Ahmadinejad has had major issues — is the main target, while the Guardian Council is also heavily hit.

This brings us to two other observations:

First; contrary to warnings from upstairs, Ahmadinejad is not afraid of picking another fight with Larijani. This might further shake things up; especially as we are approaching the crucial June presidential elections.

Second; the Iranian president has likely not given up on his widely perceived ambition to install his controversial former chief of staff Esfandiar Rahim Mashaei as his successor. In February, Ahmadinejad criticized the disqualification of candidates for the Medical Council, warning that if their barring is not reconsidered, “the election is illegal and in my view invalid.” As he lacks the power to move to invalidate the poll, the move has been widely seen as a warning to the Guardian Council ahead of the presidential elections. The context is that many Iranian figures have repeatedly lashed out at the prospect of Mashaei running for the presidency. Hardliners view him as leading a “deviant current” bent on side-lining the clergy. He has also been behind a series of controversial statements on matters from the role of nationalism in Iranian political culture to relations with Israelis.

Mashaei’s appointment as head of the secretariat of the Non-Aligned Movement (NAM) late last year was broadly seen as preparation for his candidacy. Many pointed to how the post will provide the former chief of staff with a powerful platform as well as well-needed international exposure. In relation to the proposed budget bill, Mashregh News interestingly claims the suggested 100-billion rial cut ($8.15 million official rate) in the Supreme National Security Council’s budget is the precise sum requested for the office Mashaei currently heads.

It is helpful to view the latter development against the backdrop of Intelligence Minister Heydar Moslehi’s recent warning that “we need to stop any form of abuse of government budgets in the election process.”

Whatever the case may be, it is apparent that things in Iran are set to significantly heat up. Along this vein, observers should be prepared for the political earthquake Mahmoud Ahmadinejad’s likely candidate is likely to cause — regardless of whether he’s barred from running.

Mohammad Ali Shabani is a doctoral researcher at the School of Oriental & African Studies, University of London and editor of the Iranian Review of Foreign Affairs. He has worked in media organizations and think tanks in Iran. He tweets as @mashabani