Iranian President Hassan Rouhani's $294 billion budget for 2015 shows his government is willing to cut costs to compensate for falling oil prices, but makes no allowance for the absence of a nuclear deal with the West. 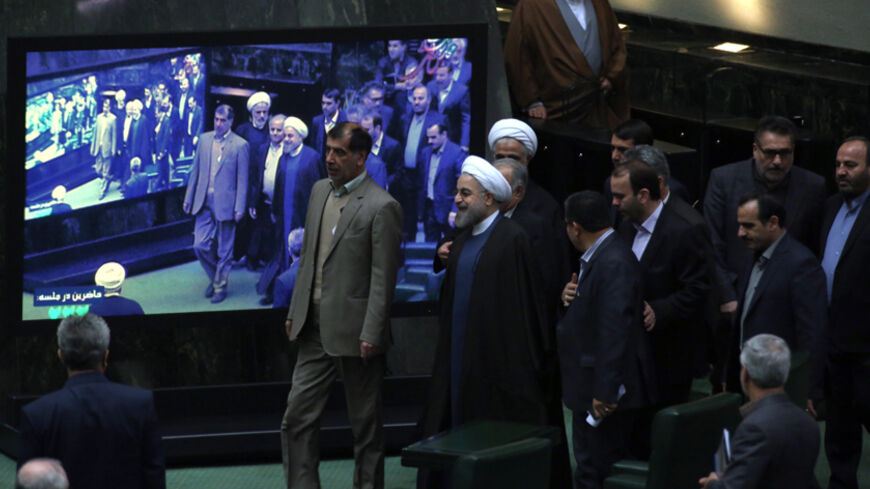 On Dec. 7, President Hassan Rouhani presented his budget bill for the Iranian year 1394 (which begins March 21, 2015) to the Iranian parliament. The budget bill was anticipated by various stakeholders, especially considering low and falling oil prices as well as the wait-and-see mode in the nuclear negotiations that have induced massive uncertainties into Iran’s economic outlook.

According to the figures released by the government, the overall state budget for the next Iranian year will be 8,379 trillion rials ($294 billion at the emerging official exchange rate of 28,500 rials to the US dollar), showing a mere 4% growth compared with the 1393 budget law. This figure alone indicates that the government has adopted a contractionary fiscal policy, though there are many nuances in the budget bill that will be debated in the parliament. The following table summarizes the key positions of the proposed budget framework, compared with the budget law of the current Iranian year:

Some key points to consider about the above target figures are:

Interestingly, looking at the expenditure side of the government’s plans, some core policy objectives become evident: Based on the presented bill, the government will increase its general operational expenditure only by 11% compared with the current year. Considering a 20% inflation rate, it is clear that the government will have to engage in major cost-cutting across many areas, especially in its current operational budget. The planned 17% increase in wages and salaries is again below inflation and above the actual financial capabilities of the government. It will remain to be seen how the Iranian parliament will react to the government’s cost-cutting plans, but it would be one of the instruments available to produce a balanced budget.

If the above figures are approved by the parliament, then the government would be able to increase infrastructure investments by about 25%, which would be a major boost for the Iranian economy. In fact, a large number of Iranian companies are dependent on the government’s infrastructure projects as contractors and subcontractors, and a significant increase in government spending would translate into job creation and increased economic activity.

However, the central question will have to be whether the planned revenues materialize, especially considering the current low oil price. Assuming that there will be no major movement in the sanctions regime in the next year, Iran will continue to export about 1.3 million barrels per day (mbpd) of crude oil and condensates. Based on a projected barrel price of $70 (which is not guaranteed at this stage), this would generate a revenue of $33 billion, of which 20% would flow into the National Development Fund (NDF), 14.5% directly to the National Iranian Oil Co. (NIOC) and 2% to oil producing provinces, leaving the Treasury with about $20 billion. If we add the proceeds of gas exports as well as the sale of gas and condensates to the country’s petrochemical units, an additional $8 billion would be generated as government revenue. This would translate to 798 trillion rials, which is higher than the budgeted figure. Furthermore, if the oil price falls further, the government would have the right to fill the gap through loans from the NDF.

The budget bill clearly indicates that the government is using its two other sources of income, i.e., tax revenues and proceeds of privatization, to compensate for the shortfall. Considering the relative economic momentum and that the economy has moved out of recession, it can be expected that the government will generate higher tax revenues. However, a 22% increase in actual tax revenues will also have a negative impact on overall economic activity, which may backfire.

The next position to consider is proceeds from privatization and financial transactions. Though the government is hoping for 27% growth compared with the current fiscal cycle, it would not be far-fetched if the government put an effort behind preparing a number of entities for transfer to nongovernmental sectors (including semi-governmental organizations). At the same time, achieving the above figures in tax and privatization proceeds would depend on a general positive mood in the economy, which would certainly emerge if Iran manages to finalize a comprehensive nuclear deal with the P5+1, the five permanent UN Security Council members and Germany. In the absence of a nuclear agreement, it is likely that some of the targets will be missed.

Amid the difficulties and uncertainties faced by the government, Iranian industry continues to perform as the country increases its non-oil exports. In his presentation to parliament, Rouhani predicted a 20% growth in non-oil exports. Though regional uncertainties (especially the events in Iraq as Iran’s main non-oil export market) have put pressure on Iranian exports, it is projected that the non-oil export performance will continue to grow, adding to the country’s trade surplus and helping to create jobs. Additionally, increased revenues from tourism are helping the economy compensate for some of the lost hard-currency proceeds in the petroleum sector.

All in all, despite a major decline in oil export revenues, the Iranian government could achieve its goal of producing a balanced budget as long as it remains disciplined and manages to cut costs in general expenditure. However, if oil prices continue to fall or if the nuclear negotiations do not produce a positive outcome, it is conceivable that the government would face a budget deficit, compelling it to increase its borrowing, leading to inflationary pressures. In general, the next phase of the subsidy reforms, alongside the aforementioned uncertainties, will push up inflation so that 20% inflation can be expected in 2015.