Iran's economic outlook remains uncertain amid fluctuating oil prices and continuing nuclear negotiations, while officials are looking to create a law that would make the country’s state budgets independent of oil export revenue. 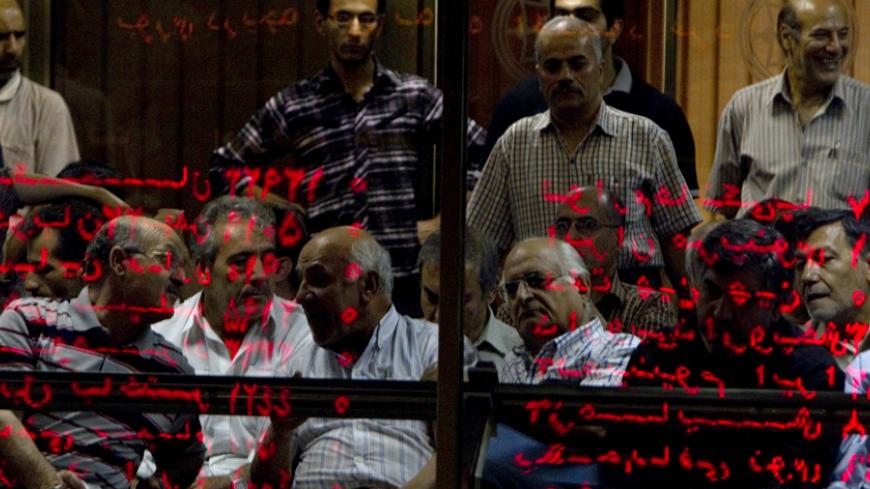 Investors look at an electronic display board, reflected in a glass partition, at the Tehran Stock Exchange, Sept. 15, 2010. - REUTERS/Caren Firouz

The Iranian economy has embarked on 2015 with a number of challenges that will directly influence the overall economic performance of the country. Low and falling oil prices as well as the wait-and-see mode in the nuclear negotiations are inducing massive uncertainties into Iran’s economic outlook.

Since the extension of the nuclear talks on Nov. 24, the Iranian rial has lost 7% of its value on the free currency market and is now trading at 35,000 rials to the dollar. The concern about the outcome of negotiations as well as worries about the negative impact of a low oil price on the government’s financial position are driving the market, despite reassurances by the Central Bank of Iran (CBI) that a collapse of the rial would not be on the horizon. Nonetheless, the markets are nervous and the overall trend is to use the hedging effect of hard currency investments in an uncertain economic environment. The same can be witnessed in investor behavior at the Tehran Stock Exchange, which remains a depressed capital market because of political uncertainties. In this context, the government and CBI will have to keep an eye on the hard currency and stock markets to fulfill their commitment to maintaining a degree of stability in the value of the national currency.

Of course, key concerns are related to the fall of the international oil price that has caused headaches for the government and private sector alike. While the government projected a per barrel oil price of $72 in the submitted budget bill, the parliamentarians will have to revise the price in the final budget law for the next Iranian year that will start March 21. In fact, leading Majles deputies are working on a law that would eventually make Iran’s state budgets independent of oil export revenue. The new law, if passed, would provide for the payment of the entire oil export revenue into the National Development Fund as opposed to currently only 20%. Though the new law will not take effect in the immediate future, it indicates Iranian officials' desire to reduce the economy’s vulnerability to oil price fluctuations.

Another potential for easing the financial pressure will be the policy on cash handouts within the continued subsidy reform process. It is now well established that the government wishes to remove higher income classes from the list of cash handout recipients. Any reduction of the actual bill for cash handouts accompanied by higher revenues through an upward correction of fuel prices will help ease the government’s financial position.

Privatization proceeds and subsidy reforms, while significant in the short run, will not be a sustainable phenomenon in Iranian budgeting and all signs are that the government will have to focus its efforts on increasing its tax revenues. As a first step, the administration is pursuing a plan to tax revolutionary, religious and military foundations. In a speech at a major conference on the Iranian economy Jan. 4, President Rouhani stated that all entities that are engaged in economic activity would be taxed.

Evidently, a full reliance of state budgets on tax revenues would require major legal, structural and political reforms that would pave the way for greater economic activity in the country. This realization may have compelled Rouhani to state in his speech that the economy will in no way improve by monopolistic ways, and that it had to get rid of rent-seeking individuals and policies. He also argued that in the past the economy had “subsidized domestic and foreign policy” and that it was time for “politics to subsidize the economy.”

It remains to be seen whether the current situation will pave the way for needed economic and political reforms that would unleash the Iranian economy's true potential. Fact is that a growth in economic and industrial activity by the private sector would generate enough impetus for economic growth. Incidentally, amid the difficulties and uncertainties faced by the government, the Iranian industry continues to perform as the country increases its non-oil exports. Though regional uncertainties (especially the events in Iraq as Iran’s main non-oil export market) have put pressure on Iranian exports, it's projected that the non-oil export performance will continue to grow adding to the country’s trade surplus and helping to create jobs. The respected economic magazine Iran Economics projects Iran’s non-oil exports to grow by 12% next year. In addition, increased revenues from tourism are helping the economy compensate for some of the lost hard currency proceeds in the petroleum sector.

All in all, despite a major decline in oil export revenues and the government’s tense financial position, the country’s economy will continue its slow growth. In general, the next phase of subsidy reforms, alongside the mentioned uncertainties will increase inflation so that a 20% inflation can be expected in 2015.

The outlook for economic growth will depend on many variables, but government officials and economists expect a modest growth in the gross domestic product of about 2% in the absence of a comprehensive deal, and a growth closer to 5% if the negotiating parties manage to conclude a nuclear deal. The signing of the deal will not only generate a positive momentum, but will also allow Iran to increase its oil exports that would offset some of the shortfall in export revenue.

At the same time, it's fair to argue that low oil prices will not compel the Iranian government to change its overall strategy in regional and international relations including nuclear negotiations. The Iranian government has seen more challenging years with regard to oil export revenue, and it has always shown that its foreign policy will not be dictated by economic factors. However, what can be expected in the current oil price environment is a greater drive toward reforms that will reduce the government’s role in the economy and help release the country’s economic potential.