What to do about Iran’s expected budget deficit

The impact of US sanctions on Iranian energy exports is bound to cause a budget deficit in Iran, with the Rouhani administration facing tough choices ahead. 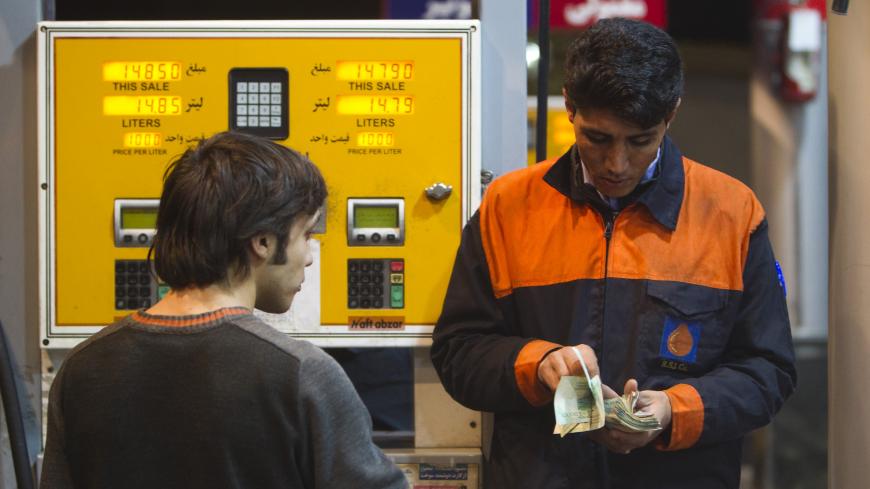 A petrol station attendant counts money as a man waits for his change in northwestern Tehran, Iran, Dec. 19, 2010. - Reuters/Morteza Nikoubazl

The outlook for the Iranian government’s finances in the current Iranian year (which began March 21) is bleak. The economic downturn that started with the May 2018 US withdrawal from the Joint Comprehensive Plan of Action (JCPOA), and the consequent nonrealization of planned oil and gas export revenues, has squeezed the government’s finances. While external pressure is expected to continue, the Iranian authorities have some remedies to address the expected budget deficit. However, each of these remedies will have socioeconomic consequences. The key question, then, is how potential actions by the authorities could help the government reduce the expected budget deficit in order to contain its devastating inflationary impact.

At the same time, the government has an opportunity to initiate some structural reforms to the overall approach to generating and expending state revenues in light of the instructions by Supreme Leader Ali Khamenei to introduce needed reforms.

Generally, in the absence of solid structural reforms, the tactics of any government facing a budget deficit would either focus on the expense side through austerity measures or on the revenue side to generate additional income. Below, we will take a closer look at what tactics could be used to address the current bottlenecks:

The government budget divides its expenses into the following categories: current expenditures (including monthly cash subsidy handouts to most Iranians and other subsidies), infrastructure investments, and budgets for government companies and banks. The latter relates to the overall allocations to entities owned by the government, which, on paper, are balanced by the revenues of the same entities. This position alone covers two-thirds of the overall government budget, and even though increased efficiency can improve government finances, it is outside the scope of this analysis.

Within current expenditures, there are some opportunities for cost-cutting, especially the planned discontinuation of cash handout payments to upper-middle class families who do not depend on such monthly payments. So far, the state bureaucracy has either been unable or unwilling to cut off a significant number of families from cash handouts. Reformist parliamentarian Gholamali Jafarzadeh Imenabadi believes that the government should have the courage to reduce the volume of subsidies to balance its finances.

Infrastructure investments have increased by 13% compared to the previous budget. However, considering the 37% inflation in the current Iranian year, the real value of the planned infrastructure projects will be lower than last year. Given that projects play an important role in job creation, it will be the last resort for cost-cutting. Nonetheless, through the adoption of modern management approaches, such as performance budgeting, the government could increase the efficiency of the existing allocations and push back against corrupt practices.

The Iranian government has the following sources of revenue in order of significance: taxes, oil and natural gas exports, privatization and sale of other goods and services. In addition, there is the option of the issuance of bonds that are used to finance planned projects and to fill the expected budget deficit. In the first category, planned tax revenues rarely materialize, as the country is facing a major tax evasion problem. Evidently, administrative reforms that would increase the efficiency of tax collection will improve the situation, especially considering that tax revenues are the largest single source of revenue.

In fact, during the December 2018 parliamentary session to present his budget bill, President Hassan Rouhani hinted at the government’s desire to increase tax revenues by exposing a number of institutions that are evading taxes. “There are lots of activities hidden in the budget which should be disclosed," he said. "The budget should become transparent. … Those who earn more money should pay more taxes.”

Increasing customs duties is also a relevant instrument, mainly as the country intends to promote its domestic industries. However, experience has shown that many traders will resort to smuggling to circumvent customs duties. The end result is usually a more distorted domestic market, which is already undermined by sanctions and restrictions on banking transactions.

Regarding oil and natural gas export revenues, under the current sanctions the government’s careful plan to export 1.1 million barrels of oil and condensates per day at a barrel price of $55 will be difficult to achieve. This, in fact, will be the main source of this year’s budget deficit. It is anybody’s guess how much Iran will actually manage to export and how much of the revenue generated will be repatriated into the economy. Assuming that 50% of the planned revenue is realized, the government will have a hard currency oil and gas revenue of $17 billion, $14 billion of which has been allocated to the importation of basic goods. Therefore the government’s maneuvering space for a correction of the exchange rate to address the budget deficit will be limited.

In fact, some experts suggested that the government itself was behind the devaluation of the national currency. Central Bank head Abdolnaser Hemmati denied on May 8 that the devaluation on the open market was intended to help the government sell some of its hard currency holdings in order to fill its expected budget deficit. Of note, a conversion of hard currency reserves at a higher exchange rate can finance some of the gap, and the government has that opportunity through offering some of its holdings on the secondary currency market. At present, the official exchange rate of the US dollar is 42,000 rials, while the open market rate is 140,000 rials.

Another tool at the government’s disposal is privatization. Though none of the major transactions are a genuine transfer of ownership to the private sector, the sale of state-owned enterprises to semi-state institutions generates funds for the state budget. Furthermore, the government could also sell its stakes in all stock exchange-listed companies to achieve quick revenues. The government has also been hesitant to privatize certain entities for political reasons. Two examples are the highly popular soccer clubs, Persepolis and Esteghlal, which would raise major funds if the authorities could sell them to the general public.

One additional tool at the government’s disposal is fuel pricing. A recent rumor about imminent rationing of gasoline led to chaos in major cities and also to government denials. Nonetheless, a two-tiered pricing of fuel seems like a valid remedy that will emerge later this year, not only to increase revenues, but also to contain fuel waste and smuggling across the country.

Regarding “other goods and services,” there are many possibilities, including introduction of new fees or license payments. The diversity of economic activity allows the government to be creative and generate additional revenue. At the same time, the introduction of e-government and m-government solutions will not only reduce costs but also increase the potential for revenue.

In sum, the government can cut costs by increasing the efficiency of subsidy payments, utilizing performance budgeting on the expenditure side, improving its tax collection and correcting fuel prices. Evidently, Iran could also borrow money from international sources. Though challenging under the current sanctions on international banking, Iran could easily qualify for foreign loans, especially as the country has low foreign debt. Iranian politicians have intuitively stayed away from foreign loans, but it could be a remedy under the current circumstances.

No matter which of the above tactics is adopted by the government, there will be socioeconomic footprints that are bound to eat into the welfare and purchasing power of Iranian society. That is why a balanced approach will be needed to contain the short- and long-term negative consequences on the economy.