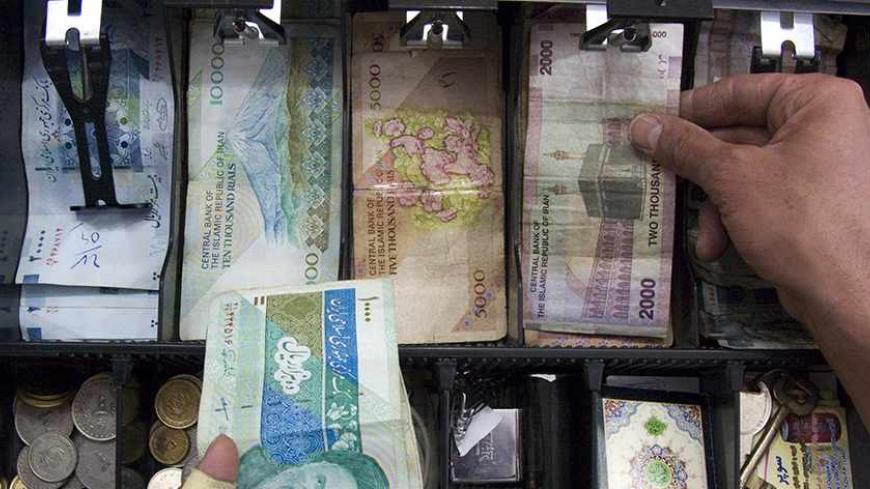 A storekeeper places money in the drawer of the cash register at his shop in Tehran, May 4, 2008. - REUTERS/Morteza Nikoubazl

President Hassan Rouhani presented the very first budget bill of his government to the Iranian Majles on Dec. 8. (Incidentally, after eight years of defiance and delays in budget debates caused by the Mahmoud Ahmadinejad administration, the new government managed to return to the normal process of presenting the budget bill.)

In this short piece, we will dissect the proposed bill. Evidently, over the next few weeks, the bill will be subject to parliamentary debates and amendments; however, one can detect the government’s preferred approach to key aspects of the country’s economy.

First and foremost, the budget bill has been based on a zero deficit, which could be understood as an attempt to return the missing discipline to state finances. In his speech to the Majles, Rouhani stated that budget deficits and continuous borrowing from the Central Bank were among the main reasons for intensifying inflation and stagnation. As such, it was a positive sign that the government was opting for zero deficit. However, it would not be the first time that a planned zero deficit turned into an actual budget deficit, especially considering the enormous challenges faced by the government.

As the following table indicates, in terms of general state revenue (from oil and gas exports, taxation and privatization), the government has projected a 17% decline compared to the current Iranian year. This is partly related to a lower allocation for privatization proceeds, but also a more realistic reflection of the state’s capability to generate revenues for the treasury.

Other important aspects of planned government revenues include the following:

Evidently, this is a contractionary budget that is designed to contain liquidity growth and, hence, inflation. The government hopes that liquidity growth would be reduced to around 20% and inflation would be lessened to 25% by the end of the next Iranian year (March 2015).

Another interesting item is that no reference can be found in the actual budget bill to cash handouts. It seems the government is planning to submit a separate bill to address its approach to the second phase of subsidy reforms. Indeed, the original law on the introduction of targeted subsidies had foreseen that the management of cash handouts should not strain the state budget (it was actually designed to replenish the treasury). Cash handouts were always supposed to be in direct relationship with the actual excess revenue generated through increased fuel prices. That the government will reinstate the original plan is good news; however, there will be a major dilemma: On the one side, the government will intuitively try to contain the inflationary impact of higher fuel prices, but on the other hand, its ability to pay cash handouts will depend on its excess revenues from the sale of domestic fuel. The new bill on subsidy reforms could potentially include a number of new elements, including the discontinuation of cash handout payments to higher income groups as well as the government’s ability to utilize some of the upside in energy savings to compensate the population and the industry.

The budget’s assumptions on oil and gas export revenue are also telling. The budget foresees the average export of 1.5 million barrels per day (which is feasible) at an average price of $100 per barrel. This would add up to an annual revenue of more than $54 billion. Taking into account the legal payments to the National Development Fund (20%), to the National Iranian Oil Co. (14.5%) and to oil provinces (2%) the government has cautiously allocated about $31 billion to the treasury which again is a sign of financial realism.

The government has also announced that it will try to unite the existing exchange rates (foreign exchange and the free market rate) to prevent corruption emerging from the rate differential. The government has projected an exchange rate between 25,500 and 26,500 rials to the dollar; however, experts believe that the new single rate will eventually be closer to 30,000 rials.

Assessing the government’s planned reduction of privatization proceeds, one can hope that the administration will not look at privatization as a source of income or a tool for buying political favors from semi-state institutions. Vice President Mohammad Nobakht has underlined on various occasions that the government is interested in a privatization process that would increase the overall efficiency of the economy, as opposed to simply using government companies to pay off debts to pension funds and subcontractors.

Finally, the 9.7% increase in the budget of state-owned companies that is reliant on a reduced base of state ownership (as a result of privatization in the current year) is an indication that the government expects government companies to become more efficient. In fact, if the administration manages to reduce the burden of loss-making state-owned companies, it will ease some of the financial tensions within the public sector.

Evidently, the proposed budget bill will be amended in the Majles. Intense debates can be expected on the government’s infrastructure budget. Majles deputies will be disappointed by the 33% decline in infrastructure investments, especially as this would increase the competition for state funds to be invested in provinces. If this move is accompanied by an initiative to decentralize the tax collection and also infrastructure decisions, it may produce a positive momentum, but at this stage there is no indication that the government will initiate such a process.

All in all, Rouhani’s first budget bill offers some signs of new realism and discipline. However, there are still big questions on how the government will close the current financial gaps (emerging from debts left behind by the previous administration) without adding to already existing inflationary pressures. Furthermore, the budget bill does not offer clues with regard to job creation. A contraction of government budget will in reality lead to job losses among state subcontractors. However, Rouhani and his team may hope that the new positive momentum alongside sanctions relief and a new sense of political stability will promote private sector investment to create the needed jobs.