Iran's state budget introduced no major structural changes, but it did improve transparency in some sectors. 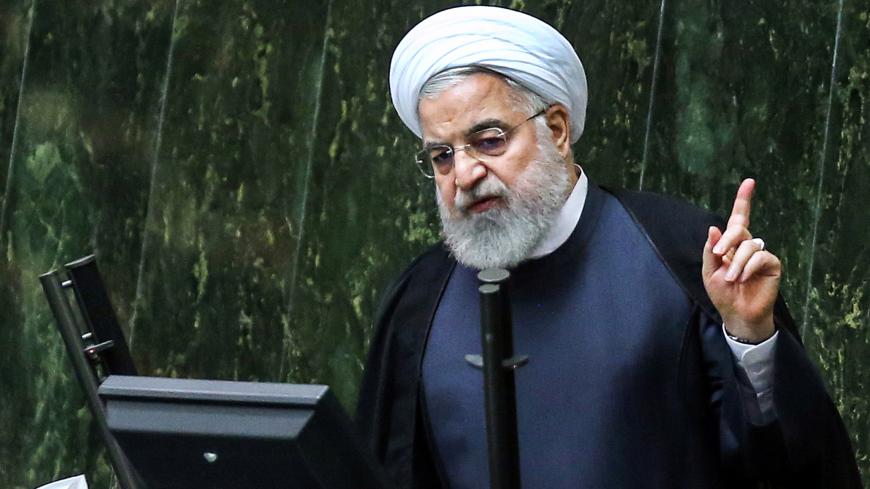 On Dec. 8, President Hassan Rouhani presented his budget bill for the next Iranian year — starting March 21— which he termed a tool of “resistance against US sanctions.” Will the bill's new approaches positively impact Iran’s sanctions-hit economy?

The general budget is approximately 25% higher than the amended budget for the current Iranian year. With an official inflation of around 40%, it is clear that the real impact of the government on the economy as a whole will be in decline. Furthermore, with a proposed average 15% increase in the salaries of civil servants, the government consolidates the further loss in purchasing power of lower income classes, which will partly be compensated through the increase in direct cash handouts.

It is not a secret that government revenues have been severely undermined by diminishing crude oil exports caused by sanctions, hence there is a need to look for other sources of revenue. The proposed bill foresees a total revenue of 3,390 trillion rials ($80.7 billion), consisting of 777 trillion rials in oil and gas revenues, 2,613 trillion rials in tax and other revenues (including privatization, sale of assets and government services). This translates to a reduction of the budget’s revenue dependency on petroleum exports to 23%, which is the lowest since Iran became a major oil exporter in the 1970s. However, to cover the planned expenditures and investments, the government will still need another 1,450 trillion rials in inflows, which will have to be generated through government bonds and monetization of other assets — such as licenses for economic activities. Compared to the expenditure side (4,840 trillion rials), the planned oil and gas revenue is only 16%. At the same time, it is conceivable that most of the government bonds will be issued based on a financing structure that will rely on future oil and gas revenues. All in all, it is valid to argue that the reliance on the petroleum sector has been reduced, but it is still a significant item in the overall budget.

One narrative in the new budget is a commitment by the government not to use the oil and gas condensate export revenues for current expenditures and only to allocate these hard currencies to longer-term investments. This is a positive step to convert Iran’s underground assets to overground infrastructure. However, any government budget always includes infrastructure investments, and the announced new policy is at best a cosmetic change. Furthermore, the government has fully ignored the provisions of the current Five-Year Development Plan, which had determined that in 1399 (corresponding to March 20, 2020 through March 20, 2021 in the Gregorian calendar), 36% of the oil and gas revenues should be paid into the National Development Fund (the NDF, or Iran’s sovereign fund), which has an independent board of trustees. The budget bill only allocates 20% of the oil and gas export revenues to the NDF. In other words, the government is already drawing down some NDF funds for its budget without due process of applying to the NDF’s board of trustees to secure loans for long-term investments.

Apart from 20% going to the NDF, 14.5% of the oil and gas condensate export revenues will be paid to the National Iranian Oil Company (NIOC) for its current expenditures and investments. One positive note is that the bill obliges the NIOC to provide quarterly reports to the Majles oversight commission on how these resources have been used.

Considering that about 400 trillion rials have been projected for revenues from privatization, the bulk of the inflow for next year’s budget will be generated through taxes and fees for government services. The amounts of 1,950 trillion rials and 263 trillion rials have been earmarked for taxes and government services, respectively. Tax revenues will increase by 13% compared to the current year’s plan. Both the mentioned positions, if managed poorly, can hurt the Iranian economy, as they translate into higher costs to Iranian businesses at a time of sanctions-related economic pressures. One path of increasing the tax revenues without hurting the private sector would be to oblige the semi-state companies, such as entities owned by religious and revolutionary foundations, to pay taxes, but this process would require political capital, which the government lacks at the current stage.

Focusing on the allocated resources for subsidies, a total of 428 trillion rials has been earmarked for cash handouts. This figure has not changed compared to the current budget, meaning that the government has not been completely honest about how it will use the additional revenues from the recent fuel price hike. In other words, the increased cash handouts to the lower income families will mainly be financed through the exclusion of higher income families as handout recipients. The total value of all subsidies, including non-cash subsidies on food and energy, amounts to 2,500 trillion rials, which indicates the key dilemma in Iran’s subsidy policies. As long as subsidies remain such a huge burden, there will be a push to introduce distributive policies such as the correction in cash handouts.

Another important aspect of the new budget bill is its approach to exchange rates. According to Mohammad Nobakht, vice president in charge of the Management and Planning Organization, two exchange rates have been used as the basis for the new budget, i.e., the official exchange rate of 42,000 rials for the importation of essential goods and the so-called Nima rate of 85,000 rials for the purchase of hard currency revenues from non-crude oil exports. It is now established that the government is gradually reducing the list of commodities that qualify as “essential goods,” which translates into a growing utilization of the higher exchange rate for imports. At the same time, even if the higher exchange rate becomes the main basis for government-allocated hard currency, there is still a major differential between 85,000 rials and the free market exchange rate of close to 130,000 rials to the US dollar. This differential has been and will be the main platform for corruption in the country — a reality that the government needs to correct, if it wishes to push back against corruption.

The ambiguity about the exchange rates will also allow the government to finance some of its deficit by applying the higher exchange rate to its hard currency revenues — a phenomenon that will add to the already existing inflationary impulses.

All in all, there are no major strategic shifts in the new budget, only some cosmetic changes that intend to create the impression that the state bureaucracy is adapting itself to new realities created by external sanctions. The needed changes in budgeting would require major structural shifts in how budgets are drafted and governed, which is only a marginal phenomenon in this bill.

The one positive aspect of the budget, similar to the most recent one, is the fact that the Rouhani administration has tried to increase the budget's overall transparency, especially when it comes to the detailed allocation to religious, educational and cultural institutions. While this transparency has generated a lot of debate, it is only a very marginal aspect of a vast budget bill that still leaves the doors open for corruption and mismanagement — the internal causes of economic malaise in Iran.