The projected reliance on oil revenues is wildly optimistic, likely making the budget a wish list, at best. 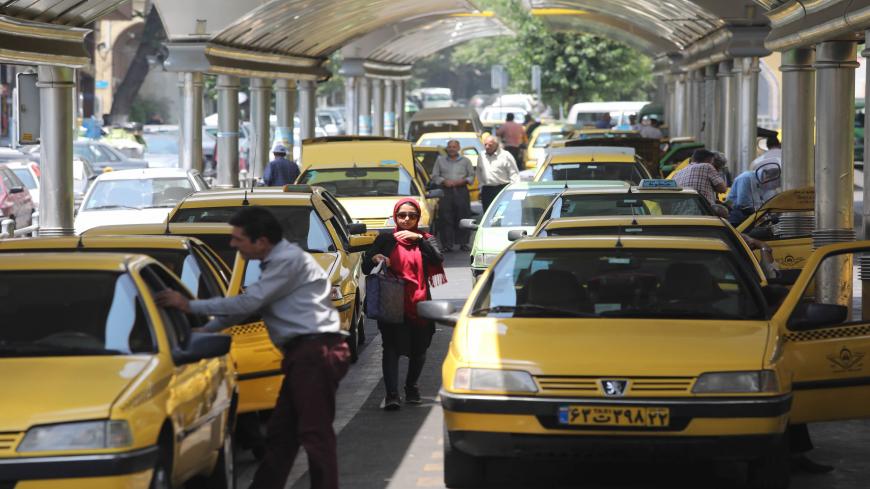 Taxis line up to pick up customers at a taxi station in Tehran, while the economy is struggling in part because of the crippling US sanctions targeting Iran's oil sales, banking transactions and major industries like steel and petrochemicals, Iran, July 3, 2019. - Atta Kenare/AFP via Getty Images

As Iran's legislature is debating the budget for the coming Iranian year, questions remain about the feasibilty of the proposed figures and its heavy reliance on oil revenues.

The budget bill for the next Iranian year that starts March 21 was submitted to the parliament Dec. 8 with the headline numbers having massively ballooned compared to the current year's Budget Law.

The figures for tax revenues, oil and gas income, and financial assets sales — major sources of government revenue — spiked about 25%, 109.6% and 139%, respectively, against the current year's budget. Spikes of this magnitude have been unprecedented in the budget proposals of preceding years. Besides, current expenditures have gone up massively by more than 46% to 637 trillion tomans ($24.5 billion at the free exchange market rate of 25,950 per US dollar), of which more than 73% is determined to be allocated to employees and retirees' payrolls. It appears that the Rouhani administration has developed an expansionary draft budget with optimistic assumptions for state oil revenues next year as US President-elect Joe Biden takes office.

Unfortunately, direct reliance on petrodollars has doubled in the budget proposal as one-fourth of the earnings in rial terms are banked on oil sales. The government has projected that 225.2 trillion tomans ($9.7 billion) of the government's general resources will be financed through the sale of its underground resources. This is while the figure for this item in the current year's Budget Law stood at 107 trillion tomans ($4.1 billion). This suggests that the 2021-22 budget may be closed on the assumption that sanctions will be lifted as the government estimates that the number of barrels of oil to be sold might touch 2.3 million per day, getting back at the level of the country's oil sales in 2018 and prior to the unilateral US sanctions. However, The Economist recently in a report forecast oil exports for Iran of 440,000 barrels per day during the 2021-22 calendar year.

In the same vein, the scheme in the draft budget to presell oil by issuing oil-backed securities on Iran's energy exchange, IRENEX, worth 70 trillion tomans ($2.7 billion), while this plan was rejected a few months ago in the Supreme Economic Coordination Council, is a hot topic these days among the commentators and members of parliament alike. Experts and think tanks strongly oppose the issuance of oil bonds; they believe that it is the costliest way to compensate for the budget deficit. In the same vein, the parliamentary Research Center recently warned that the issuance of oil bonds has no advantage over the current rial-based bonds being traded in the stock market. The same think tank also underlined the fact that the plan's disadvantages far outweigh the advantages as it can exacerbate the country's vulnerability to oil sanctions.

In addition, 38% of the oil and gas revenues should be paid into the National Development Fund (NDF) based on the provisions of the current Five-Year Development Plan (2016-2021). However, just 20% of oil and gas revenues are about to be allocated to the NDF since the government has requested to withdraw the remaining 18% without due process of applying to the NDF’s board of trustees. Nonetheless, realizing the projected amount of oil and gas sales and access to hard currency has proved to be a tall order in previous years. Thus, this is another indication that the budget deficit is already in the cards as a direct outcome of fanciful budgeting for next year.

Out of about 841 trillion tomans ($32.4 billion) of the government's general resources, approximately 318 trillion tomans or almost 38% is projected to be provisioned by collecting taxes and other income. As businesses have been under severe financial pressures due to the coronavirus pandemic and US sanctions, the government is best advised to expand the tax base, counter tax evasion — estimated to be more than 40 trillion tomans ($1.5 billion) every year — smarten tax systems and online connection of data and information between state agencies. After the imposition of the US sanctions against Iran in 2018, President Rouhani's government had adequate time to move toward creating sustainable revenues for the country. Nevertheless, this never happened and structural budget reforms remained on paper.

To boost the economy and create jobs, the approved budget for infrastructure projects for the current year is close to 88 trillion tomans ($3.4 billion). That being said, in the draft budget only an increase of 18% is considered for development projects over 2021-22. This meager hike is not only neutral but also negative in regard to the current point-to-point inflation rate. Needles to say, it does not bear the advantage of encouraging employment and prosperity in different types of business industries across the country.

One of the major factors that every government takes into account for drafting their budget bills is the balance between payments and receipts, an issue that has been neglected in the drafting of Iran’s national budget bills in recent years. Generally, the budget's operating balance shows the difference between revenues — tax revenues and other non-oil revenues — and expenditures. In the general policies of the recent Five-Year Development Plans, one of the most important goals has been to reduce the existing budget deficits to zero. This means that government spending ought to be supplied by government non-oil revenues. Nevertheless, the performance of the operating balance indicates that the operating balance deficit has vastly risen from 1.76 trillion tomans in 1995 to about 104 trillion tomans in 2019. In other words, the deficit has not only skyrocketed over the last 24 years, it has also climbed up by about 60 times. During the Fourth to Sixth Five-Year Development Plans, this deficit has still multiplied by about eight times in spite of the targets set for this measure.

Despite the fact that various administrations including the Rouhani government have incessantly claimed over the years about nondependence on oil revenues in the budget, the reality is that it is not possible to break dependence on oil without changing economic structures. Unless the tax base is reformed, inflation is controlled, the imbalances of the country's banking system are eliminated and the growth of liquidity is not controlled, it seems premature to have the budget readily deprived of oil revenues all at once.

In general, the budget bill's resources have been prepared with irrational growth due to the forecast of unrealistic revenues with the presumption of removal of oil sanctions. Should the bill not seriously be amended by the parliament, an eye-watering budget deficit awaits at the horizon for the next administration. This denotes that the next president is doomed to encounter imminent crises in his first year of office.