Iran would benefit from a shift to a single exchange rate. 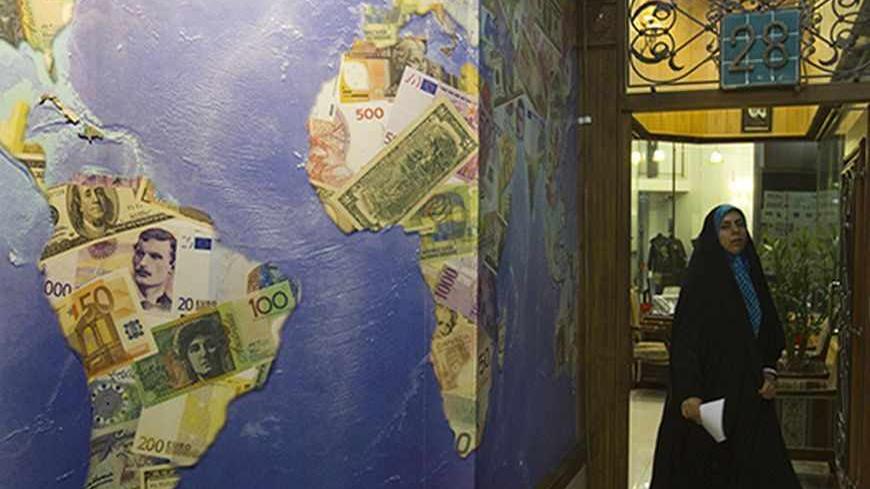 A woman leaves an exchange office at a shopping center in northern Tehran, Oct. 24, 2011. - REUTERS/Raheb Homavandi

The Iranian business community is facing an undecided Central Bank of Iran (CBI) with regard to its foreign exchange policy. The main reason for its hesitation may lie in the opaque interests connected to a multi-tiered exchange rate system.

For years, the free-market value of the Iranian rial has reflected the overall sentiment of the country’s business community as well as the current supply-demand situation. The Ahmadinejad administration kept the free-market rate stable, generating sufficient supply by injecting petrodollars into the market. However, political tensions alongside sanctions and inappropriate economic policies led to the collapse of the rial on the free market, and the rate grew to as high as 40,000 rials to the dollar in 2012.

The situation relaxed somewhat when the government introduced the so-called "currency room" for importers and exporters and by early 2013, the rate of the "currency room" (25,000 rials to the dollar) became the de facto official rate, with the free-market rate hovering around 35,000 rials. However, ever since the election of President Hassan Rouhani, the free-market rate has followed a downward trend. (See graph below.) The appreciation of the rial over the past week was clearly a consequence of the positive news coming out of New York and the potential for a positive turn in the nuclear negotiations and the outlook for sanctions relief.

However, on Sept. 24, Iran’s business community witnessed a very peculiar intervention by the governor of the CBI, Valiollah Seif. While the free-market rate of the Iranian rial was rapidly following a downward trend, Seif commented that the rate had "reached its minimum," and that "a further fall would not be logical.” Incidentally, the emerging situation, i.e. the free-market rate falling to approach 28,000 rials to the dollar, which meant that the differential to the official exchange rate was being closed, should have been ideal for the Central Bank. Market insiders believed that the rate could have fallen to 26,000 if the trend had not been interrupted. However, the CBI governor’s comments pushed the rate up again, as traders and businesses rushed to buy more hard currency in anticipation of corrective measures by the CBI.

So what could motivate the CBI's governor to stop the further fall of the free-market exchange rate? Clearly, in an economy plagued by inflation and other economic pressures, appreciation by the local currency could be good news. However, it seems that the CBI is following a different logic.

One explanation could be that the CBI believes the real value of the rial to be lower than the current "official rate" at the "currency room" suggests. Another explanation could be that the actual and opaque interest groups within the Iranian economy wish to have a higher differential between the official and the free-market rate, as this differential could be used for economic benefit.

On Sept. 25, Mohammad Nobakht, vice president for economic affairs, tried to return calm to the market by stating: “The government insists that the exchange rate should remain stable. We are sensitive to price increases, but also sensitive toward sudden price drops. We need to instill stability. The statements by the CBI governor do not mean that we want to devaluate the rial — they only mean that we are in favor of a stable market rate.”

As the above graph indicates, the rate had once before fallen to about 28,000 rials to the dollar in the aftermath of the June presidential elections. The gradual increase of the rate to about 32,000 rials within two months was partly related to the uncertainty about the future of sanctions and economic policy, and partly to the fact that the real value of the rial (based on a long-term inflation-differential valuation between the dollar and the rial) should actually be around 32,000. In fact, it is this rate that would make Iranian exports competitive in regional markets.

So, if the rate of 32,000 rials to the dollar is more realistic, why not adjust the official rate to reflect the real value of the local currency? Evidently, such a move would make imports more expensive and have unwanted inflationary impacts on the already vulnerable economic conditions.

It is understandable that the CBI is torn between two direct interests, i.e. exporters' wish for a lower-valued rial so that they can compete on regional and international export markets versus the importers who would suffer as a result of another devaluation of the rial.

Iran’s technocrats know that there are other ways to manage such conflicts of interest. One can either settle the rate at a higher value (such as 28,000 to the dollar) and then find ways to support exporters through grants or tax breaks, or determine a lower value (such as 32,000) and subsidize importers through similar schemes.

Therefore, the continuation of a multi-tiered exchange-rate system will only lead to one assumption: the existence of opaque business interests that can dictate CBI policy. These opaque networks benefit from the differential between the two rates and thrive when the difference is high. They may have access to the official rate for their imports or just access to hard currency at official rates that they then sell at the free-market rate to other stakeholders.

As such, the above intervention by the CBI governor has certainly tarnished his credibility, and has created more uncertainty in the market about the CBI's motivations. At a time when positive news on the diplomatic front is generating new optimism in the Iranian business community, it is unfortunate to see the same community feel uncertain about the emerging foreign exchange policy. It is now the expectation in the private sector that the official rate should be adjusted in line with the CBI belief that the rate of 28,000 rials to the dollar is the minimum. As long as this move does not happen and the officials do not offer a transparent explanation on what logic is being followed by the CBI, it will be assumed that the foreign exchange policy is mainly feeding opaque business interests. Evidently, a 20% differential is the ground on which corrupt circles and business practices can grow. That would be the wrong signal from a government that is generating optimism on other levels.