Why is Iranian rial suddenly weakening?

Inflation and other factors have caused the Iranian rial to weaken to the point where it now takes more than 40,000 rials to buy a dollar on the free market in Iran. 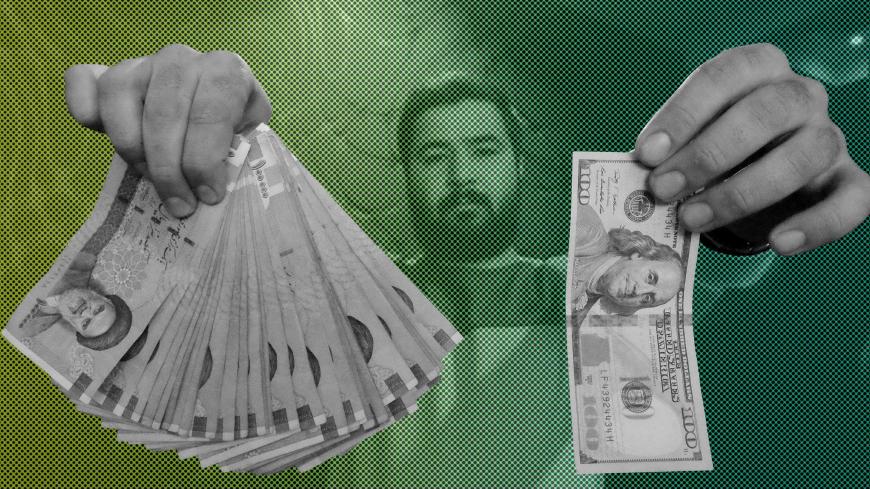 A money changer poses for the camera with a $100 bill and the Iranian rials it would be exchanged for at a currency exchange shop in Tehran's business district, Iran, Jan. 20, 2016. - REUTERS/Raheb Homavandi/TIMA

A recent devaluation of the rial on the so-called free market in Iran has raised concerns that the country’s economy will experience another collapse of the value of its national currency similar to what happened in 2012. The free market rate of the US dollar surpassed the psychological mark of 40,000 rials in early October. In early December the rate had reached rial 42,000. In the same period, the official interbank rate, which is set by the Central Bank of Iran (CBI), went from 33,741 rials on Oct. 2 to 35,328 rials on Dec. 6 — close to a 5% drop in value.

The easy explanation for this phenomenon is that the devaluation was a psychological reaction to US President Donald Trump's outlining a new antagonistic strategy toward Iran and his decertifying the Joint Comprehensive Plan of Action nuclear deal in October. However, while political and psychological factors play a significant role, there are also other drivers that need to be understood.

The key stakeholder in the determination of the exchange rates is the CBI, both because it governs monetary policy and is the only buyer of the government’s hard currency revenues. Hence, it is also the main supplier of hard currency to the market, including the free market — that is, foreign exchange bureaus.

After the rial's drop in October, CBI Governor Valiollah Seif, who was attending meetings in Ankara, Turkey, said the fluctuations were a reaction to political comments and that they would only represent a temporary shift. Seif said other international currencies also were fluctuating due to a number of developments in global markets. Iran had experienced similar fluctuations in the last quarter of 2016, where the dollar reached 41,500 rials, then dropped to 38,000 after the CBI intervened and offered larger hard currency volumes to the exchange bureaus. This year, the market witnessed a similar fluctuation. With the first surge, the dollar reached 40,600 rials, but with the CBI’s initial intervention, the rate dropped to 40,050; however, it did not go below 40,000, making it appear that there is now a new marker for the free market rate. By Dec. 6, the exchange rate for the dollar hit 42,000 rials, underlying the upward trend.

To understand these fluctuations and also predict where the market is heading, one needs to appreciate that there has been a shift in the approach to the question of exchange rate policy since last year, mainly due to changes in the government’s economic team. There are three schools of thought involving the exchange rate agenda in Iran. The first group is focused on the impact of exchange rates on Iranian exports and believes that the value of the rial has to be adjusted to keep Iranian exports competitive. However, it is evident that an annual devaluation of about 5% (the trend of the past four years) alongside a 10% annual inflation will gradually render Iranian exports less competitive and undermine the country’s export potential. A devaluation of the exchange rate based on inflation trends is also considered inflationary and works against policies that try to introduce a sense of economic stability. The second group believes in the gradual adjustment of the exchange rates in line with purchasing power trends. Seif and the top management of the CBI belong to this category. The third school of thought would like to unify the official and free market exchange rates in order to remove the ambiguities and uncertainties and allow market forces to be more determinant.

The diversity of views explains why the Rouhani administration’s objective of unifying the two-tiered exchange rate system has not been materialized four years after it was announced. Maintaining a two-tiered exchange rate system allows the administration and the CBI to introduce regulations to use the higher free market rate for some of the transactions without officially devaluing the rial. The fact is that in Rouhani’s first term in office, the strategy was to maintain a degree of stability and gradually adjust the rial's value. However, the changes in the administration’s economic team have changed the decision-making dynamics. Compared with their predecessors, the new ministers of economic affairs and finance as well as industry, mining and trade, Mohammad Shariatmadari and Massoud Karbassian, respectively, are more interested in export promotion than exchange rate stability.

Experts agree that the current official rate of the national currency (about 35,000 rials to the dollar) represents an overvaluation of the rial; hence, it is evident that there would be a push to correct the value. The main driver of the exchange rate correction is the country’s export industry, which would become more competitive on international markets if the rial is valued more realistically. Nevertheless, the various schools of thought will continue to interact to find a suitable blend of policies. Shocks such as the recent 5% devaluation may be part and parcel of a gradual devaluation of the rial and the preparation of the market for an eventual unification of the exchange rates.

There are also other factors that need to be taken into account: On the one hand, hard currency has always been a hedging mechanism for many small and large investors and any sudden rate change caused by internal and external factors leads to a surge in demand for hard currency. On the other hand, one should not underestimate the impact of seasonal demands for hard currency, including demand connected to a growth in foreign travel — the most recent one being the massive pilgrimage of Iranians on and around Arbaeen. Of a longer-term nature is the impact of the gradual opening of banking channels with Iran that will allow the CBI and other banks in general to repatriate their foreign holdings. This, combined with the fact that Iran is generating higher oil and gas export revenues, will be seen as a positive factor in the determination of the rial's value in the short to medium term.

While the various factors and schools of thought will continue to influence exchange rates in Iran, it is valid to project that the interbank rate of the rial will be adjusted based on the inflation differential between Iran and the United States (estimated to be 8% in 2018). As such, though a CBI intervention may bring the rate down slightly, the US dollar’s free market rate does not seem to go below 40,000 rials anymore. An adjustment by the mentioned inflation differential means that the interbank rate would move to 38,000 rials in the second half of 2018, which would push up the free market rate (usually about 15% higher than the official rate) to about 44,000 rials in the same period.