Although Iran's business community has been unsettled by the recent fluctuations in the value of the national currency, the rial rates appear to be on a trajectory to finally become unified. 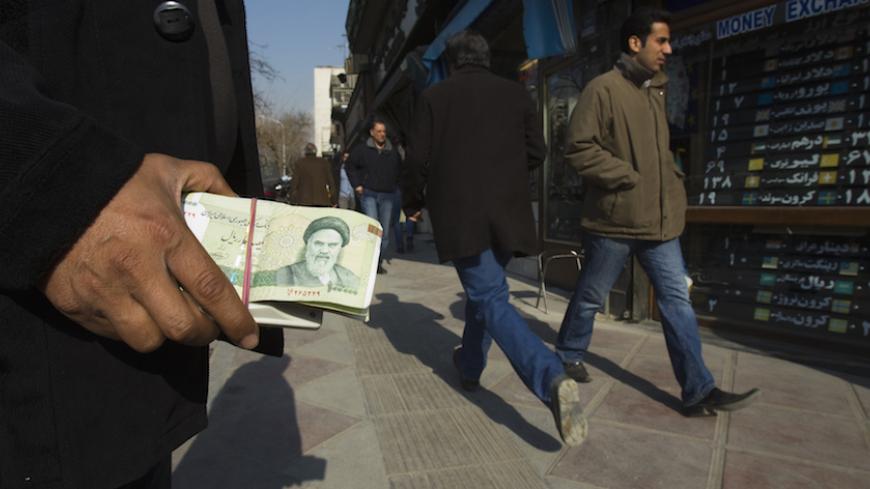 Recent fluctuations in the free market rate of the Iranian rial have caused concerns within the country’s business community that the currency may experience a sharp decline in value due to economic and political upheavals.

The Iranian economy has been operating with a multitiered exchange rate system for the past three decades. Currently, there are two official exchange rates: the official interbank (forex chamber) rate, which is used by banks for official hard currency transactions, and the so-called free market rate, which is used by licensed foreign exchange bureaus for all other transactions using the hawala system. Traditionally, the free market rate has been a valid indicator of the mood in the Iranian economy. The last major collapse of the rial value came about in the second half of 2012 when harsh sanctions prevented the Central Bank of Iran (CBI) from repatriating needed hard currency to manage the artificially kept rate of 11,000 rials to the US dollar. At that time, the free market rate collapsed to 30,000 rials to the greenback and caused a massive backlash leading to major economic decline in 2013.

Notwithstanding, in the past few months, the Iranian rial has been experiencing a roller-coaster ride, and as of Jan. 4 the rial has lost about 13% of its value against the US dollar since Sept. 15, 2016. The decline of the free market rial/US dollar rate since the US presidential election amounts to about 7%. The rate (currently at 39,500 rials to the US dollar) had actually reached 41,000 toward the end of December 2016, but bounced back when the CBI assured currency traders that it would. In fact, the governor of CBI, Valiollah Seif, has opined that the real value of the rial would be around 36,000 rials to the greenback. Respected experts such as Ali Dini Torkamani underline the fact that the CBI is in a monopoly position to determine the exchange rate; however, it is important to dissect some of the technical and psychological reasons that have led to the recent fluctuations.

One reason for the loss of value to the US dollar is the general appreciation of the greenback against other currencies. Incidentally, the Iranian rial is priced against a basket of currencies that does not include the US dollar. In fact, the rial is more influenced by the fluctuations of European currencies (especially the euro), which also lost value against the US dollar in the past few months. To prove the point, in the period between Sept. 15, 2016, and Jan. 4 of this year, the free market value of the Iranian rial only lost 5% against the euro. Other proof for the impact of the strengthening of the US currency is the fact that the official interbank rate of the rial lost about 3.3% of its value against the US dollar between Sept. 15, 2016, and Jan. 4. In the same period, the interbank rial exchange rate actually appreciated against the euro.

There are also obviously psychological aspects that need to be taken into account. The election of Donald Trump in the United States and the anticipation of renewed anti-Iran policies and sanctions, the extension of the Iran Sanctions Act by the US Congress, uncertainties about the international oil price and domestic political developments have all contributed to a fragile domestic currency market and an atmosphere in which many economic players resort to buying hard currency as a hedging mechanism.

The fact that the planned rate unification has been delayed by more than a year (it was originally envisaged for March 2016) is an indication of the complexities of the Iranian economy. Expectations were that the implementation of the nuclear deal and the eventual lifting of sanctions would actually strengthen the Iranian rial, but the rial has lost value in both markets. Fact is, the CBI continues to manage the exchange rate through its regulation of the currency market. The volumes that the CBI injects into the market have a major impact on the actual free market rate, and all signs are that the rial will gradually be devalued to create a new balance in the economy. Some hiccups (such as the recent one) are also caused when the CBI does not manage to inject enough hard currency into the market, sometimes due to unexpected banking bottlenecks and sometimes due to financial shortcomings. What is helping the CBI currently is the continued repatriation of Iran’s foreign assets back into the domestic economy. Recently, Bahram Qassemi, the spokesperson of the Iranian Foreign Ministry, confirmed that since the implementation of the nuclear deal some $10 billion of Iran’s previously blocked assets have been repatriated in cash form or gold. This is obviously good news for the CBI, and it will empower Iranian officials to continue to manage the currency market.

Despite the CBI efforts and the government’s desire to maintain a degree of stability, a number of leading actors in the Iranian business community opine that the Iranian rial is currently overvalued and that a devaluation will be in order in 2017.

The interbank rial/US dollar rate now stands at 32,374 rials, and it is expected to gradually approach the free market rate as the CBI tries to steer toward a unified exchange rate in the course of 2017.

To gauge the real value of the rial, we could look at the Iranian currency’s position since 2012, when the forex chamber rate was introduced. In October 2012, the CBI introduced the forex chamber rate at 25,000 rials to the US dollar. If we use this rate as a basis, calculating based on the inflation differential methodology to determine the exchange rate, then we would get to the following picture:

This means that the rial remains overvalued and that the CBI intervention will be the main instrument to keep a lower rate. CBI Governor Seif’s statement that the real value of the US dollar would be 36,000 rials can be seen as a hint that the unified exchange rate may tend toward that value, though it would also be artificially low, putting pressure on Iranian exports and also on the competitiveness of domestic products compared with imported goods.

Nonetheless, the CBI will also be under pressure to allow market forces to have a more determinant role on the rial exchange rate. As such, it is valid to expect that the rial will be devalued gradually to close the gap between the two existing exchange rates. Considering the growing significance of Iran’s non-crude exports, there will also be a push from the exporters to adjust the rate accordingly. Therefore, it would not be far-fetched to expect the free market rate to remain in the range between 38,000 and 40,000 rials to the US dollar, with the interbank rate gradually approaching that level in the course of 2017. Furthermore, it would be realistic to expect a rate unification toward March 2018 when potentially Rouhani’s second-term government would be fully in place.