Though the Central Bank of Iran has repeatedly announced imminent plans to unify the country’s dual exchange rates, it appears that conditions may make this goal tenable at last. 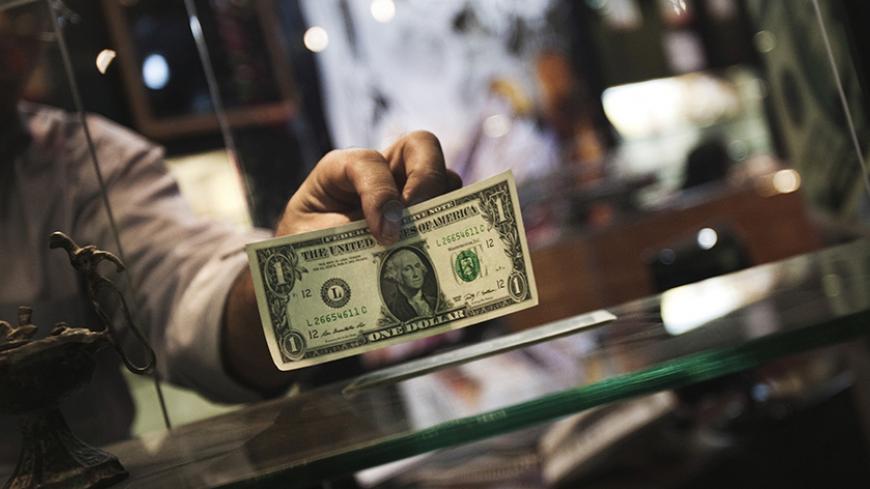 A currency exchange dealer displays a US dollar at the window of his shop in a shopping center in northern Tehran, Oct. 3, 2010. - REUTERS/Morteza Nikoubazl

TEHRAN, Iran — At present, Iran has both an official exchange rate and an unofficial market rate that is used in exchange houses. The rial trades at above 35,000 per US dollar on the open market, compared to the official rate of around 31,000.

To help boost economic growth, Central Bank of Iran (CBI) Governor Valiollah Seif has announced that he plans to unify the dual currency exchange rates before the end of the current Iranian calendar year (March 20, 2017). If realized, the move will be a major step toward effectively floating the rial and ending state control over the foreign exchange market.

Iran has long been struggling to end the practice of maintaining dual exchange rates, but ending this arrangement is far from easy. Though Seif has on various occasions announced that the unification of foreign exchange rates is just around the corner, it has not materialized due to the myriad challenges.

In a July 23 op-ed for the leading economic daily Donya-e-Eqtesad, economist Ahmad Mojtahed outlined several factors that have prevented the CBI from unifying exchange rates so far. In Mojtahed’s view, “stabilizing the inflation rate below 10%, reducing currency rate volatility and recent permission for banks to buy and sell hard currencies” are positive and necessary steps taken by the CBI, but they are far from sufficient. He argued that factors such as continued lack of access to international financing as well as Iran’s own foreign exchange reserves, concerns over the return of high inflation after its successful reduction in past years and the upcoming presidential elections in the United States and Iran, coupled with the possible impact of the ongoing economic recession, are all fundamental challenges delaying the establishment of a unified exchange rate.

It should be noted that despite the many challenges, there is strong pressure in favor of unifying the exchange rate. A recent study conducted by the Tehran Chamber of Commerce concluded that establishing a “correct foreign exchange rate" is needed to “solidify the economy.” Nonetheless, the study puts forward three reasons not to take for granted an end to fluctuations in the currency rate in a post-unification scenario. First, it argues, the foreign exchange rate is a macroeconomic variable since its volatility mirrors the realities of the economy. Second, the foreign exchange rate is greatly dependent on the strength of the currency relative to the currencies of other countries. Third, it is not possible for the authorities to conceal or delay currency fluctuations to market watchers.

The study also notes that no country has been able to successfully keep in place a multi-tier currency system for an extended period. This is essentially due to the unfavorable impact of the suboptimal allocation of scarce resources. The study argues that continuation of the current dual rate policy may lead to the formation of inefficiencies in production and consumption, escalation of speculative money-changing activities and rent seeking, further entrench bloated bureaucracy and weaken the private sector in favor of the public sector in the long term.

Of note, the survey puts the currency rate depreciation in the 2000s, before Ahmadinejad’s presidency — while the currency rate unification was underway — at a mere 3%. In contrast, the currency depreciation is put at 92% in 2012, and an average annual rate of 53% in 2013, when Ahmadinejad was in power. The foreign exchange shock at that time, amid unilateral US and EU banking and financial sanctions over Iran’s nuclear program, led to the most dramatic negative effect ever recorded on national production.

In this vein, the Tehran Chamber of Commerce study stresses that if the Ahmadinejad administration had acted in accordance with the guidelines of Iran's Fifth Five-Year National Development Plan (2010-2015), thus fixing the official foreign exchange rate in proportion to the differential between domestic and foreign inflation rates, the economic shock of the drastic rial depreciation could have been less severe.

In other words, the currency rate fluctuations of the past decade may have been avoidable, had a better policy been implemented. The Tehran Chamber of Commerce also attributes the currency fluctuations of years past to limited revenues from foreign commercial transactions in the wake of the sanctions on Iran, difficulty in repatriating funds from overseas accounts and lower shares of non-oil export revenues compared to income from oil sales.

Given the current economic conditions and with the lifting of banking sanctions, if properly implemented, the exchange rate unification will have advantages — perhaps not in the near term, but definitely in the long run. For instance, a unified exchange rate will help boost demand for domestic products within the country and also abroad, thereby expanding non-oil exports. This is due to the added competitive advantage of a floated rial, which is expected to be cheaper than the current official rate. The Tehran Chamber of Commerce argues that the immediate effect of floating the rial will be a devaluation of 12% (compared to the current official rate) in the short term and 31% in the long term.

In his vein, the study argues that a 10% devaluation in the next Iranian calendar year (March 21, 2017-March 20, 2018) will increase the inflation rate by a mere 2.6%. This is not a serious source of worry as the impact on inflation, even if compounded over the years, is too low to significantly alter the broader trajectory of inflation, which is negative. The study argues that it will take a mere two years for possible inflationary pressures emanating from a devaluation to dissipate. The country’s current single-digit inflation rate is having a cooling effect on chances for sudden and dramatic devaluation of a floated rial, and this effect is expected to continue.

As such, though great challenges lie ahead, it appears that it is only a matter of time before the CBI will finally move ahead with its long-stated plans to unify rial rates and help revive domestic production.