Why Iran's currency is suddenly wobbling

After years of relative stability, the Iranian rial is once again wobbling — but why? 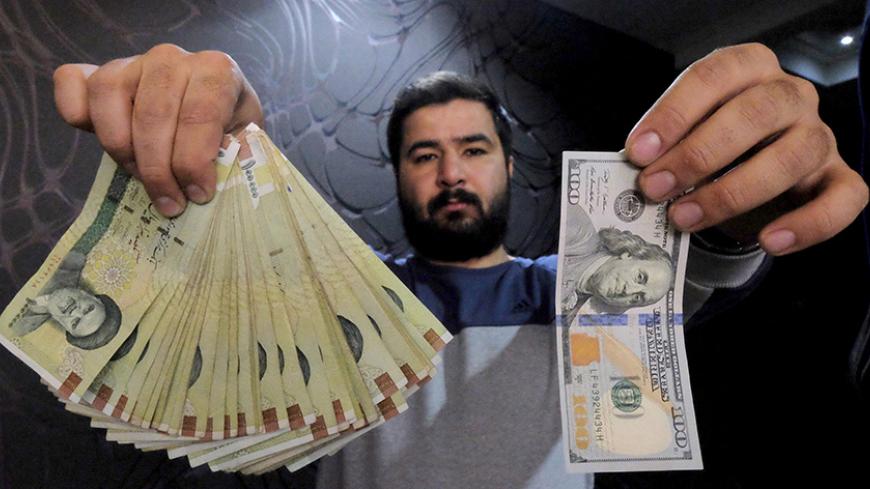 A money changer poses for the camera with a $100 bill (R) and the amount given when it's converted into Iranian rials (L), at a currency exchange shop in Tehran, Jan. 20, 2016. - REUTERS/Raheb Homavandi/TIMA

TEHRAN, Iran — Fluctuation in the value of the rial became a common occurrence in Iran during the presidency of Mahmoud Ahmadinejad, and especially in the latter years. Foreign currencies would get more expensive by the day — and sometimes even by the hour. When Ahmadinejad first took office in 2005, the dollar traded for 8,200 Iranian rials. In the days before the election of President Hassan Rouhani in June 2013, the greenback cost some 36,000 rials — four times as much.

In contrast, once Rouhani took office, fluctuations in the rial’s value not only became a rarity but the Iranian currency became stronger. For instance, in January 2014, the greenback traded for some 29,000 rials on the open market. However, in the past month, the rial has suddenly been weakening. The dollar rate had stayed around 35,000 rials for an extended period, but in November, things started to change. After the election of Donald Trump as president of the United States, Iran was also affected by the subsequent tense political atmosphere around the world. Demand for the dollar in Iran had increased from the day before the US election, and when Trump’s victory was announced, the price of the greenback jumped to 37,000 rials on the open market. In the last week of November, it even reached 40,000 rials. This sudden spike in the exchange rate resulted in an effective halt in currency trading on the open market, with many exchange offices removing the greenback from their lists of available currencies. Though some experts believe that the jump is merely a short-term bubble, others think that the rial needs to weaken to reflect its true value.

Prominent Iranian economist Saeed Laylaz, who teaches economic history at Shahid Beheshti University, spoke to Al-Monitor about what has been going on in the past weeks. He said, “The increase in the exchange rate of foreign currencies is related to economic conditions. During the past three years, the exchange rate has not increased naturally and in accordance with the current inflation rate. The more accurate the exchange rate is — and closer to reality — the better it is for the economy. This increase has occurred naturally and thus it will not cause inflation.”

Some believe that the Rouhani administration has willfully weakened the rial on the open market in order to make up for a budget deficit in the coming Iranian fiscal year (beginning March 20, 2017). This practice was pioneered by the Ahmadinejad administration, which repeatedly toyed with the rial exchange rate on the open market in order to compensate for budget deficits and to fund outstanding payments to contractors and government employees. This is achieved by making use of the arbitrage between the official and open market rates, which is currently some 20%. In other words, the government can get more rials per dollar since oil — one of its main sources of revenue — is priced in foreign currency and converted to rials with the lower official exchange rate in the budget. On Dec. 3, the head of the Investment Group of Iran’s Chamber of Commerce, Hassan Salimi, spoke about this issue and said, “The Rouhani administration believed that it could sell oil for $65 to $70 a barrel in 2017, but now it is certain that the price of oil will not increase and will stay around $50. Therefore, to make up for the [budget] deficit, it has increased the exchange rate.”

However, Central Bank of Iran (CBI) Governor Valiollah Seif on Nov. 30 strongly denied that the government has anything to do with the sudden fluctuation in the rial’s value. Instead, he attributed the flux to several factors, such as the seasonal increase in demand for foreign currency amid the Arbaeen pilgrimage and the Gregorian New Year, the prospect of oil prices, as well as the US presidential elections. Seif said, “Comparative studies show that each year around this time, because of seasonal travels, we are faced with an increase in the exchange rate of the dollar. However, in the last three months of the Iranian year — the winter time — the value of the US dollar will decrease.”

Indeed, the unexpected agreement by OPEC members to cut output at the cartel’s Nov. 30 meeting — which many in Tehran considered a major achievement for Iran — reversed the drop in the rial’s value. The dollar traded at around 38,000 rials in subsequent days. At the same time, the increase in oil prices following the OPEC agreement created hope for an acceleration in the strengthening of the rial. But this apparent reversal did not last long. With both chambers of the US Congress voting in favor of a 10-year extension of the Iran Sanctions Act, and the White House announcing that President Barack Obama will sign it into law, a complete turnaround took place and the rial’s value started dropping again. Though the drop was tempered, the price of one US dollar — which had reached some 40,000 rials on Nov. 29 and then dropped to 38,000 rials on Dec. 1 after the OPEC agreement — started increasing again on the open market. On Dec. 8, the greenback traded for around 39,000 rials.

In an interview with the semi-official ISNA news agency on Nov. 7, former CBI Governor Tahmasb Mazaheri said that the Rouhani administration should not “forcibly” keep the exchange rate low and should allow it to move within its “natural course.” The CBI soon reacted to Mazaheri’s comments. While noting that stability in the exchange market is one of its top priorities, CBI Economic Affairs Deputy Peyman Ghorbani said Nov. 10, “We are aiming for [the implementation of] a single exchange rate … and we have done some good work in this regard. Progress is slow, but we are on the right track. Stability will not only control the expected inflation, but will agree with the economic principle that shows that extensive fluctuation in the currency market damages economic growth and employment levels.”

As a result of the recent fluctuation in the value of the rial, the gap between the CBI’s official exchange rate — which values the greenback at just over 32,000 rials — and the open market rate has widened. This could complicate the Rouhani administration’s efforts to achieve its key objective of unifying the dual exchange rates. Perhaps more so, it may cause political damage as many are left wondering whether the rial will strengthen or whether it will be left to reach its “real value” — whatever that may be.