A confluence of political, economic and psychological factors appears to be behind the recent plunge in the Iranian currency’s value on the free market. 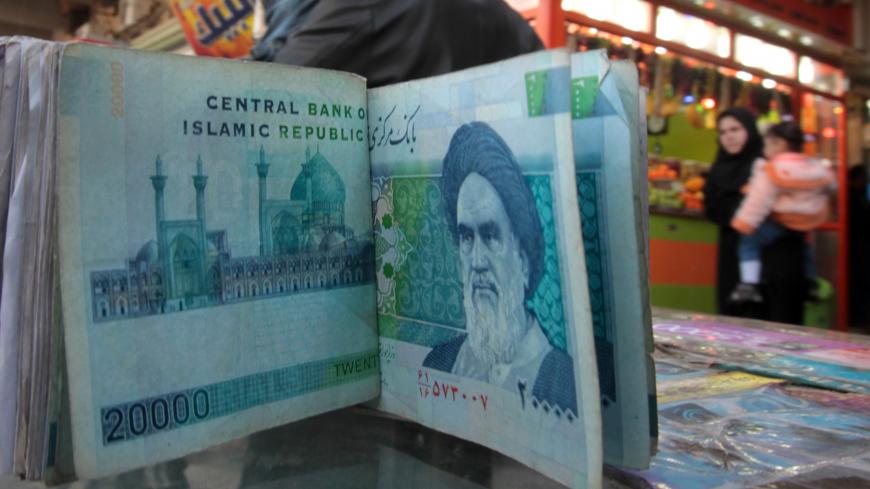 A major and unexpected devaluation of the rial on the free currency market has taken many in Iran by surprise. Analysis of the behavior patterns in the Iranian foreign exchange market suggests that six main parameters need to be assessed to understand what has contributed to recent events.

First is the application of the inflation differential between Iran and the global inflation levels. This factor has previously been discussed by Al-Monitor, and there have been strong signs that the Rouhani administration has sought to maintain a degree of stability in order to contain the inflationary impacts of a devaluation. If one would have applied the inflation differential, the free market rate of the US dollar would have been around 48,000 rials in October 2016, meaning it would have theoretically far surpassed 50,000 rials by now. Based on statements by top officials, the Central Bank of Iran (CBI) and the administration remain committed to managing the value of the national currency. However, there is continued inflationary pressure on the rial, especially as Iranian exporters wish to see a weaker currency that makes their products more competitive. The ongoing ambiguity surrounding exchange rate policies, and especially the guessing game about the long-promised unification of the official and free market rates, continue to unsettle the market, which enters into panic mode whenever there are sudden fluctuations.

Second is the CBI’s intervention in the currency market. The free currency market is fully managed by the Central Bank, which intervenes to balance supply and demand. Evidently, if the CBI fails to inject enough funds, the demand side will push up the price. This seems to have occurred in recent weeks — both due to a shortage in CBI injections as well as the sudden hike in demand as a result of panic buys. One can speculate whether the CBI’s actions were intentional or due to operational limitations. Respected economist Farshad Momeni has speculated that the Rouhani administration is manipulating the foreign exchange market to benefit from the arbitrage between the official and free market rates in order to compensate for its budget deficit. Others have reported that the CBI has faced difficulties in repatriating hard currency, thus the shortage on the domestic market. But both these explanations would only justify parts of the problem as the Rouhani government and the CBI always have alternative plans in place. As such, it is more likely that a chain of events and rumors, and especially talk of that the CBI would allow the rial’s value to slide, led to unexpectedly high demand for which the CBI was not operationally prepared.

Third is the ability of the CBI to repatriate external funds. Besides managing the foreign currency market, the CBI is also clearing the overall transactions between international and Iranian banks — a process that is growing in volume due to the gradual normalization of banking relations between Iran and international second- and third-tier banks. The CBI’s ability to handle the growing volume of transactions has also been a factor in the recent hiccups in the market. Some explain the operational shortcomings as a function of international, and especially Emirati, banks not cooperating with the CBI. But it is also conceivable that there are some internal shortcomings, taking into account new compliance standards to which all Iranian banks have to adhere. Such operational hiccups are immediately understood as unsettling factors that lead to rumors that the CBI is short of funds. Thus, it is evident that the CBI and Iranian banks need to further upgrade their systems to manage the growing financial flows in order to prevent such bottlenecks.

Fourth is the psychological state of the market. There is no doubt that Iran’s free market rates are also driven by psychological factors. Any assumption by key players that the rial will lose value in the future pushes up demand for hard currency as a hedging mechanism. Increased domestic political tensions, as well as threats by US President Donald Trump to leave the nuclear deal, have certainly led to concerns about the economic well-being of the country, hence the hard currency purchases as a hedging mechanism.

Fifth is the outlook for other investment options. To many Iranians, hard currency is not only a hedging mechanism but also an investment. In this vein, the stagnation of the housing market, the collapse of multiple credit and financial institutions, and most importantly the continued downward correction of interest rates have led to a growing demand for gold coins and hard currency. The planned outlook for interest rates for bank deposits was 10% — on par with inflation — a prospect that does not attract Iranian investors, hence the push for alternative investments. Amid this situation, it should be noted that despite CBI instructions, banks have been reluctant to reduce their interest rates, knowing that deposits would be withdrawn, putting further pressure on balance sheets that are already under stress. In the wake of the sudden devaluation, the CBI has quickly reacted to this phenomenon by allowing banks to issue rial bonds with an annual 20% interest rate in hopes of absorbing some of the market liquidity. Furthermore, the CBI has introduced hard currency bonds with a 4.5% return even though there is no commitment to pay out the interest in hard currency, which is a downside.

Sixth is the expected official rate and the differential with the free market rate. As noted above, Iran has a two-tiered exchange rate system. Over the past decade, the differential between these rates has mostly been around 15%. As soon as reports emerged that the dollar rate in the next Iranian year’s budget (beginning March 21) would be 41,000 rials, there was resulting pressure on the free market rate, with expectations that the dollar would surpass 47,000 rials. For years, the CBI has announced plans to unify the dual rates. Yet given that the two-tiered system offers an easy platform for corruption and profit, the fact is that there are stakeholders who oppose a rate unification.

One can blame the CBI and the Rouhani administration for mismanaging some of these processes. One can also argue that the devaluation was due to an unfortunate coincidence of various factors that took the authorities by surprise. Yet considering the current political tensions in the country, it is not far-fetched to assume that some political constituencies may have manipulated the market to portray Hassan Rouhani as an incompetent president. It certainly doesn’t take much to manipulate the hard currency market amid the current uncertainties. Indeed, one merely needs to spread a few rumors — such as a plan to radically devalue the official rate — to generate a panic mood.

The question is what the CBI and the administration must do to restore confidence in the free currency market. The arrest of up to 90 foreign exchange traders and the suspension of the activities of 10 foreign exchange bureaus will not change the market dynamics. However, the alternative investment tools rolled out by the CBI as well as the plan to increase transparency in hard-currency transactions are positive steps.

Some economists continue to urge the CBI to allow the rial to be devalued so that the economy can find a new balance. But such a move would have inflationary impacts that would tarnish the Rouhani administration’s containment of inflation. At the end of the day, the Iranian economy remains unbalanced on many levels, and it will remain prone to such vulnerabilities — especially if a host of factors coincide due to political and economic developments.