What will lifting sanctions do to Iran's rial?

The removal of sanctions will likely substantially strengthen the rial and could lead to a wave of cheap and wasteful imports into Iran, economists have warned. 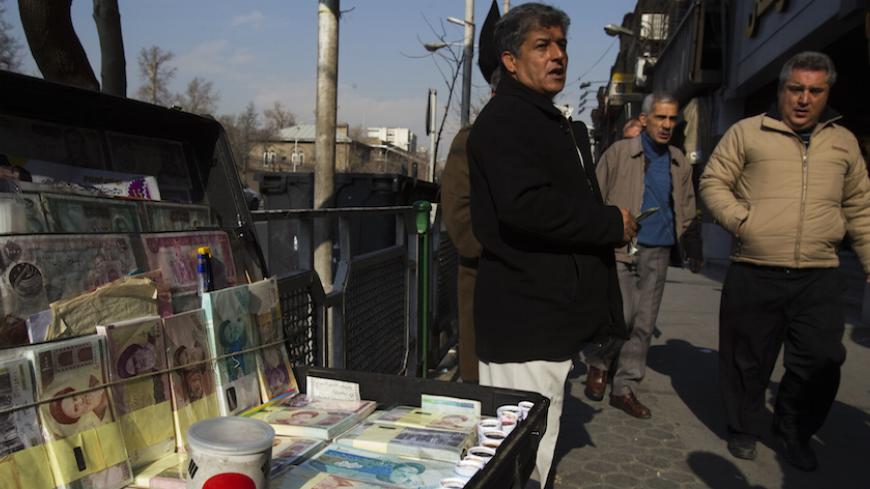 If economic sanctions against Tehran are lifted, the flow of $130 billion worth of Iran’s blocked funds coupled with billions of dollars in possible foreign direct investment into the $370 billion economy could be disastrous if a proper currency policy is not adopted.

Farhad Nili, head of the Monetary and Banking Research Institute, noted earlier this week that sanctions have left Iran with "compulsory savings" abroad, an opportunity that he said "must be seized in a best way."

The Central Bank of Iran (CBI) has in the past 18 months focused on curbing inflation, which is an effective factor on the rial’s parity rate against the US dollar as the dominant reserve currency. Inflation, which once stood at 40%, reached 15.5% in the 12 months ending April 20, a great achievement for the moderate administration that took power with an agenda to recover the economy. Late in April, the regulator eventually decided to lower interest rates, putting a 20% cap for deposit rates (down from 22%) and 24% limit for lending rates (down from 28%). Observers believe the third step the CBI may take is a decision to unify the dual foreign exchange rates, a policy the administration has been sitting on since mid-2013.

Some economists believe a unified system could be a boon for Iran's business environment, as it would reduce corruption and rent-seeking, a phenomenon widely believed to be a major setback for the struggling economy. In April, Tahmasb Mazaheri, a former CBI governor, told Nasim Online that the administration “should not waste time by putting off the unification plan for the post-sanctions era.” Sohrab Delangiz, another monetary expert, also believes the dual-rate system gives “wrong signals” to investors. The rial’s value, he argues, should approach a more "realistic" level — possibly around 37,000 rials against the US dollar or as others suggest around 52,000 rials, taking into account the 50% inflation rate collectively registered in Iran and the Organization for Economic Cooperation and Development over the past two years.

Valiollah Seif, the CBI governor, however, does not agree with the argument, though he has announced his bank will consider unifying the foreign exchange rates after stability returns to the economy, that is, when the ongoing nuclear talks between Iran and six world powers (the United States, Britain, France, Germany, China and Russia) result in a final deal, and therefore a removal of sanctions. Seif and the like-minded figures argue that inflation is a determining factor, saying a single-digit inflation rate is an essential prerequisite for a unified exchange rate system. In an April 21 interview with CCTV America, Seif said Iran would cut inflation to single digits within the next two years. That means no such plan will be on CBI's agenda until inflation is further tamed, an elusive target.

Even if the regulator opts to unify the rates right now, the dollar's official rate — hovering at 28,400 rials — should be replaced with the unofficial rate of at least 33,000 rials. That will cause inflationary impacts, especially on domestic products deeply relying on imported raw material. On the other hand, the psychological expectations, generally affected by the CBI's decisions, could be too difficult to be managed.

An assistant professor with Tehran-headquartered Institute for Trade Studies and Research suggests that the unification of rates will only be advisable when the government is able to significantly increase nonoil exports, boost economic growth and domestic manufacturing, maximize its tax income and minimize the national budget deficit — fundamental issues that would take years to overcome.

So what would the currency market be like in the post-sanctions era? Traders and business owners already put off their plans to import raw material and machinery, hoping the rial will appreciate in a meaningful way when a nuclear deal is signed by the self-imposed June 30 deadline. A stronger rial is largely feared to be translated to cheap imports, a phenomenon that economists are warning against.

Addressing monetary officials and experts during this week's conference called "The Effects of Ending Sanctions against the Central Bank," Nili warned against "wasting several hundred billion dollars on imports, a move that could kill all available opportunities."

The Rouhani administration is believed by many in the capital to have a tendency toward populism, a characteristic that could lead to the same behavior as its predecessor demonstrated between 2005 and 2013 when faced with a jump in oil revenue. If the incumbent administration decides to please the public opinion, after a hard time, it may start importing huge amounts of consumer goods; cheap imports could be at the cost of loss of domestic manufacturing, a sector the whole government, not only the Rouhani administration, has a cohesive strategy to support. So the economic elite in the government are advised to stick to a contractionary policy when it comes to the foreign currency market, in a bid to prevent the national currency from too much destructive appreciation against the dollar.

Mehdi Barakchian, an economist within the administration, favors the Chinese central bank idea to block foreign revenues the government is earning from entering the domestic market. In a recent interview with Tejarat Farda magazine, Barakchian discussed how for the past two decades the People's Bank of China has been purchasing billions of dollars in foreign funds to avoid a strong yuan, a move that has frequently been met by opposition from US authorities.

If the CBI applies the same policy as China did, the rial will not appreciate very much and therefore imports would only increase reasonably. Instead, the government has the opportunity to invest in regional countries, a policy the Rouhani administration has already started to pursue. It could be a defendable decision if the CBI chooses to shift a major part of the multi-billion dollar revenue to external markets. The strategy could meanwhile boost Iran's foreign policy as it would help increase the Islamic Republic's share in other investment markets, the same path China, a model economy for Iran, has been following.