Why Iran’s property market is unlikely to boom anytime soon

The Iranian real estate market signals that a recovery is on the way, after an almost three-year-long recession — but there is still debate about the likelihood of a property boom. 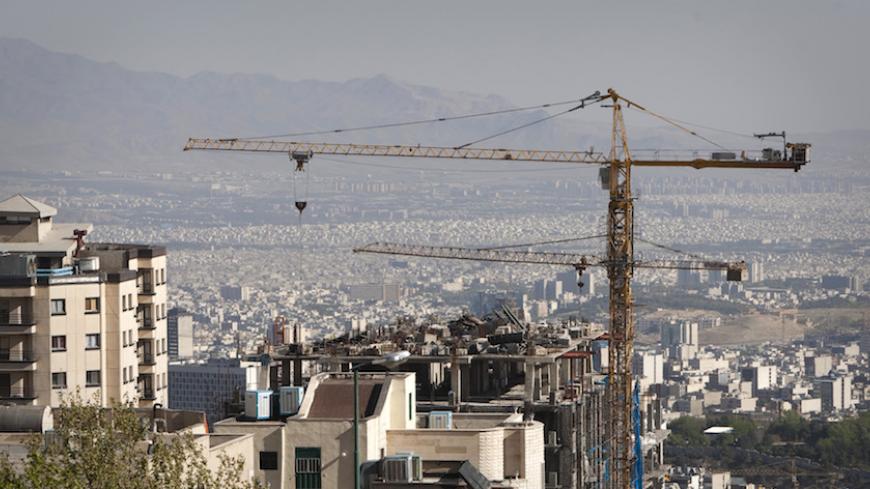 Construction cranes work on a high-rise in the foothills of the Alborz mountains in north Tehran, April 15, 2010. - REUTERS/Caren Firouz

TEHRAN, Iran — Signals from the Iranian real estate market suggest that a recovery is on the way, after an almost three-year-long recession. Yet there are contradictory statements being made about the likelihood of a property boom. Indeed, those who are practically engaged in the housing industry are relatively optimistic about speedy growth, while analysts believe a sharp hike in prices is unlikely.

The number of property deals in the 12-million-strong market in Tehran rose by 27.6% in the month to July 21, compared with the same period last year. However, the figure dropped 4% compared with the month before, according to the Central Bank of Iran’s latest housing report. Meanwhile, trading of mortgage bonds in the over-the-counter Iran Fara Bourse rose 11% in the week to July 21, ILNA reported, citing data released by the Central Securities Depository of Iran.

The head of Tehran’s real estate union, Hessam Oghbai, and his predecessor, Mostafa Khosravi, are both of the opinion that demand for residential buildings is on the rise. Khosravi predicts that growth will reappear in the second half of the Iranian fiscal year running to March 20, 2017, and that it will probably jump in the subsequent year. Yet the market is still a long way from the 14,000 deals per day during 2011 and 2012, when housing prices doubled as a result of intensified financial sanctions, which led to the harsh depreciation of the rial.

Many housing experts such as Hossein Raghfar, a Tehran-based economist and university lecturer, believe that the government has to step in and increase lending in such a way that mortgages will cover 80-85% of home values; otherwise, demand for residential units is predicted to remain low, even though there are signs of steady growth.

During the past winter, the number of new residential construction permits issued around the country reached 92,843 — an increase of 34.6% compared with the quarter before, according to the Statistical Center of Iran. Construction activity, however, is still considered weak by many experts.

One indicator of the state of the market is demand for luxury residential property in Tehran, which has reached rock bottom. The market share of luxury apartments, which are classified as properties with square meter prices of at least 80 million rials ($2,589, or $240 per square foot), decreased to 1% in the first quarter of the current Iranian year (beginning March 20) from 5% in the same period last year, the leading economic newspaper Donya-e Eqtesad reported July 24. The dropping demand for luxury apartments in well-off neighborhoods has pushed sellers to squeeze down prices, but it doesn’t appear to have had any impact on demand for such properties.

The same trend is evident when it comes to commercial real estate. Two prominent housing pundits stated at a recent gathering in Tehran that for investors pouring cash into commercial units, the good days are over. Hossein Abdoh Tabrizi, an adviser to the minister of roads and urban development, warned investors that they must learn from their costly mistakes, referring to the excess supply of luxury and commercial units in the past decade that has left financial resources trapped in vacant and unaffordable buildings.

According to Donya-e Eqtesad, the market share of apartments sold at a value of 20-40 million rials per square meter in the first quarter of the current Iranian year was 51%. Given that the average property price in Tehran hovers around 42 million rials per square meter, the report shows there has been a rise in demand among the middle- and lower-middle-class residents of the Iranian capital. This could be a sign that the government’s attempt to provide more mortgage loans to buyers of small- and medium-sized homes has been somewhat successful, though not yet enough to give a major boost to the residential property market.

Tabrizi and Teymour Rahmani, an economist at Tehran University, said at the recent gathering in Tehran that the housing market could grow in the coming months if investors shift their energy from the luxury and commercial property market to the untapped build-to-rent market for the middle class and those with low incomes; Tabrizi and Rahmani said this has been a popular investment model in developed countries. However, both economists noted that there would be no “high” demand in either market in the short run. The latter argument means that Iran’s real estate market will most likely remain stable rather than jump in the next couple of years, even as demand is expected to steadily increase. One of the main reasons for this prediction is the decline in the country’s population growth. Indeed, some experts believe Iran’s population growth rate, which dropped from 1.6% in 2006 to 1.3% in 2011, has had a negative impact on the housing market.

Behrouz Maleki, the author of a new book titled “An Analysis of Iran’s Real Estate Market,” blames banks for their inflexibility when it comes to financing of housing projects, calling for further lending. He also criticizes the government for failing to adopt a mechanism that could help investors have a better understanding of the boom and bust periods in the real estate market. But the government says it has already come up with solutions.

Minister of Roads and Urban Development Abbas Akhoundi has unveiled an initiative to revitalize old residential areas, a project that officials expect the private sector to be extensively involved in. The plan aims to encourage construction of residential property in 2,700 neighborhoods in 495 cities, where a total of 19 million Iranians reside. Akhoundi says the plan would meet the real needs of middle-class consumers by providing them with affordable housing.

Should this huge revitalization project be executed, construction in urban areas is likely to receive a boost. However, the project would need billions of dollars in investment, part of which could come from abroad, as some experts suggest. But the question is how interested a foreign real estate investor could really be in such a project, given the already-low demand in the market and inflation of around 9%, assuming that inflation will not rise again in the next couple of years.