The impact of the re-imposed US sanctions has forced the Rouhani administration to shift its market-oriented approach to the economy to focus on active involvement by the state. 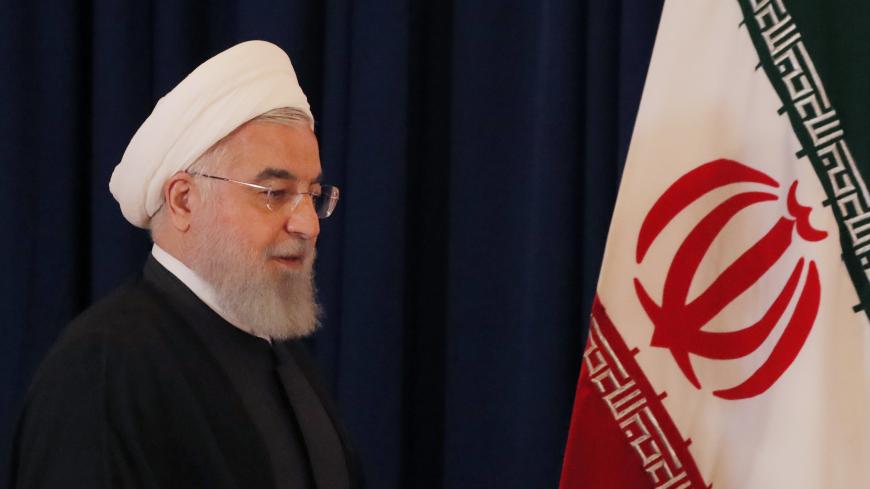 Iran's President Hassan Rouhani walks by his country's flag at a news conference on the sidelines of the 73rd session of the United Nations General Assembly at the UN headquarters in New York, Sept. 26, 2018. - REUTERS/Brendan Mcdermid

The United States has entered a new phase in its containment strategy against Iran by re-imposing all sanctions against the Islamic Republic. Tehran is continuing to abide by its commitments under the Joint Comprehensive Plan of Action (JCPOA), thereby securing the economic support of China and Europe and defining a more prominent role for the government in the country’s economy. President Hassan Rouhani’s recent cabinet reforms can be viewed as an important step in this regard.

With Washington pulling out of the JCPOA in early May, the debates over Iran’s political economy changed focus from gradual structural reform centered on market forces to crisis management and preserving economic security under sanctions. Iran’s economy experienced an unexpected shock in the initial months following the US withdrawal from the nuclear deal, sparking intense debates within Iranian society and among political elites about the government’s policies and whether cabinet ministers would be able to deal with the crisis at hand. These debates centered on the need for change in the Ministry of Industry, Mine and Trade, the Ministry of Cooperatives, Labor and Social Welfare, the Ministry of Economy as well as the Ministry of Roads and Urban Development — four entities that make up the government’s economic core and are quickly affected by sanctions. Agreeing that the situation was critical, the Rouhani administration supported the need for cabinet reforms and tried to cooperate with its critics, especially in parliament, to achieve this goal.

However, it took more than three months to instigate changes in the cabinet as a result of negotiations between the relevant parties, difficulties in finding suitable managers who were in tune with the administration while at the same time capable of dealing with a multilayer economic crisis, as well as the government’s reluctance to replace some ministers. In the end, two of the four key ministers mentioned above were impeached and the two others stepped down as they were about to be. Meanwhile, the parliamentary votes of confidence in the new ministers indicated that parliament was ready to compromise with the government following this period of tension and pressure.

Some of the issues prioritized by the new ministers include the main challenges for Iran’s political economy: the provision of basic goods, transparency and fighting corruption, separating business from welfare, stabilizing the unemployment rate, reforming the banking system, preventing hyperinflation, providing capital for companies as well as solving the liquidity and housing crises.

Iran needs 7.7 quadrillion rials ($183 billion) of investment to continue its economic growth in the coming years. The biggest challenge for 75% of the country’s industrial production is the shortage of circulating liquidity and capital. To overcome this challenge, about 1.5 quadrillion rials ($35.7 billion) worth of new funds are required. The Mehr housing project alone requires 115 quadrillion rials ($2.74 billion) of new funds to be completed. Rouhani has described this ambitious construction scheme, which was initiated by the administration of former President Mahmoud Ahmadinejad, as a major hurdle to Iran’s already faltering economy.

The growing need for fresh financial resources comes at a time when Iran is finding it difficult to attract foreign investment. Obtaining this capital from the private sector has its own complications, and the government has no choice but to rely on its own assets and play a more direct role in the economy.

The new ministers of economy and welfare have proposed trilateral approaches for dealing with the crisis, meaning interaction between the government, the private sector and work force to solve their difficulties. They also call for using state and public funds to finance large companies, especially those involved in export or liquidating some of the government’s 70 trillion rials ($1.66 billion) worth of assets.

The new ministers have also stressed the need for structural reforms in the Iranian economy and highlighted the experiences during the 1980-88 Iran-Iraq War as a successful model of when the government became more involved in the economy. However, Rouhani’s former ministers describe these calls for structural reform while at the same time backing a more active government role in controlling the economy as somewhat contradictory.

The cabinet Rouhani formed following his re-election in 2017 was a compromise between Iran’s two main political camps: the Principlists and the Reformists. From the political economy standpoint, Rouhani’s lineup of ministers following the signing of the 2015 JCPOA was the least he could do to satisfy the wishes of middle-class Iranians regarding structural reforms based on the market, production and the redistribution of wealth.

However, the re-imposition of US sanctions has been a shock to Iran’s economy, affecting many people’s livelihoods, especially Iran’s middle class and the poor. This drop has also worried Iranian elites, who are concerned about their social status.

For the parliament members who will run in the next year's elections and for the parties supporting the Rouhani administration, this decline has created some new concerns. Changing the economic core of the cabinet can be viewed as a temporary answer to these concerns. In the meantime, the main priority for the new economic team has changed to preventing the expansion of the economic crisis.

It is still too early to speculate about the results of this change. However, it is clear that Iran’s sanctions strategy has now found a new component.