Iran’s government was left with no choice but to resort to unifying the official and open market currency exchange rates to tame the rial's slide during a currency crisis, which has spurred some positive efforts. 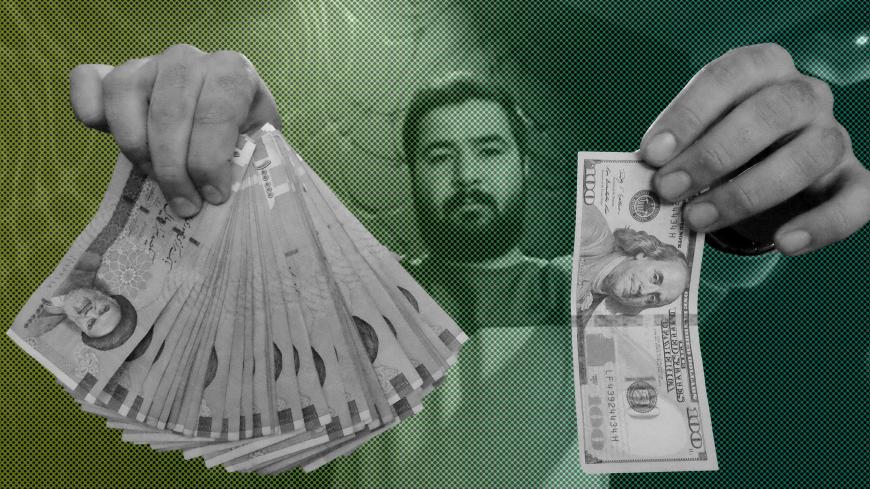 A moneychanger poses with a US $100 bill and the equivalent amount when converted into Iranian rials at a currency exchange shop in Tehran, Jan. 20, 2016. - REUTERS/Raheb Homavandi/TIMA

In an abrupt move, Iran moved to unify its dual exchange rates — one official and the other the free market rate — on April 11 to prevent further depreciation of the rial, re-establish the currency's stability and empower banks. Why at that time, and how successful will the move be? The short answer seems to be that it was the only viable option under the circumstances. The sustainability of the move will depend on the ability of authorities to control the market in coming months.

Exchange rate unification has been a long-standing promise and long-sought policy of President Hassan Rouhani's administration. Indeed, Valiollah Seif, head of the Central Bank of the Islamic Republic of Iran (CBI), had on multiple occasions set deadlines for its implementation. Rate unification was considered, however, to be contingent on a resumption of international banking ties, which failed to materialize as hoped by Iran following the implementation of the nuclear deal in January 2016.

The rial's plunge was fueled by Iranians’ wish to either protect assets or profit by betting against the currency, which earlier this month dropped to an all-time low of 60,000 rials against the US dollar. The greenback traded for 36,000 in mid-September, signifying a decline of more than 60%. With the rate unification, the dollar is now set at 42,000 rials, but the rate will not remain fixed according to Seif, who has also referred to rate unification as the “best decision at this time.”

“Based on the conditions that had formed in the market, forex rates were being set with limited banknotes as actual deals were scant,” Kamal Seyyed Ali, director of the Export Guarantee Fund of Iran, told Al-Monitor. “The price hike was not logical because the CBI was not injecting currency into the market.”

As to why the rate unification decision was made so suddenly, Seyyed Ali said that when the official and market rates failed to reconcile after so many years, there was no other option but to bring them together abruptly. The sudden nature of the move has come under fire, however, because the previous administration, led by Mahmoud Ahmadinejad (2005-13), had made a similar move in early 2012 only to see the dollar rate subsequently more than triple in the span of one year.

According to Seyyed Ali, who previously served as the CBI deputy for foreign exchange affairs, the monetary regulator had already “lost the true target market” — that is, travelers, students and patients in need of hard currency — prior to rate unification, because unregulated exchange houses had gained prevalence, and the market was flooded with speculators. With the decision this month, Seyyed Ali noted, the government endeavored to maintain the value of Iran's national currency, fight massive capital flight and direct the market toward real demand by countering speculative activities.

“The government had no choice but to unify the rates,” Saeed Leylaz, a prominent economic analyst and academic, told Al-Monitor. “It needed to do that to stabilize the situation both in terms of international and local circumstances.”

As Leylaz points out, the policy cannot and should not be viewed through a strictly economic lens, as it reflects a security and political issue as well. Indeed, some in Iran have pointed to the foreign exchange crisis as also emanating from pressures by the United States and Saudi Arabia.

Indeed, the currency devaluation comes within the context of US President Donald Trump’s many threats to exit the nuclear deal, which would lead to the re-imposition of hard-hitting sanctions. Meanwhile, Saudi Crown Prince Mohammed bin Salman renewed his attack on the nuclear deal during his recent visit to the United States.

Private sector representatives are less than optimistic about the longevity of the unified rate, regarding it as a short-term band-aid rather than a cure for what many point to as the underlying problem — namely, fast-rising liquidity, with money supply standing at close to 15 quadrillion rials ($357.14 billion), according to the latest CBI data.

To manage supply and demand, Leylaz proposes strict taxes on foreign travel, curbs on imports of luxury vehicles, increased customs tariffs and intensified supervision for opening letters of credit. On the other hand, Seyyed Ali advocates “suppressing smuggling to decrease pressures on the CBI” in terms of providing currency, especially through free trade zones (FTZs), and bringing currencies generated from exports back into the country.

The administration has been pursuing some of these goals. The National Tax Administration recently implemented higher departure taxes and increased tariffs on car imports. Meanwhile, FTZs have become subject to an array of new Cabinet measures to manage currency demand.

Based on new Cabinet directives, imports will only be possible after strictly registering orders with banks and certified money exchanges. All exporters are obligated to repatriate the hard currency they generate — for which there are tax incentives — and all foreign currency deals outside the CBI's regulatory framework will be considered “smuggling.” In this vein, 30 trillion rials ($714.28 million) will be allocated to cover the gap between the previous official rate of around 38,000 rials — the subsidized rate only available to government departments and priority goods — and the current rate for supply of essential goods and medicines.

Furthermore, as Iran's June deadline to comply with reforms agreed to with the Financial Action Task Force looms, the banking system has been tasked with implementing anti-money laundering measures and combating terrorism financing regulations as soon as possible.

What is more, the CBI is using the situation as an opportunity to return to the fore the banks that were pushed aside by sanctions and have been slowly regaining ground the past two years. In 11 currency-related directives disclosed in recent days, the central regulator has announced a list of 33 certified uses for hard currency and barred certified exchange shops from purchasing and selling currency banknotes until further notice. They are only allowed to engage in deals after getting the green light from banks.

In sum, while rate unification came as a shock to many, the government seems determined not to repeat the mistakes of its predecessors. As such, depending on the extent of the implementation of its announced measures, the currency crisis may come to be a blessing in disguise — even if the dual exchange rate regime re-emerges.