As he prepares to begin his second term, Iranian President Hassan Rouhani is faced with the prospect of a major banking crisis. 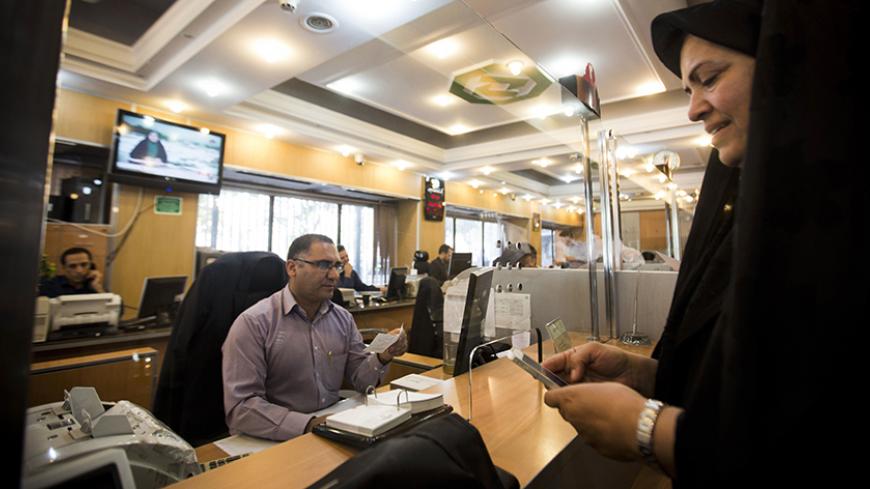 An Iranian woman uses a cellphone as a bank clerk processes her request at the Export Development Bank of Iran in Tehran, Iran, July 27, 2015. - BEHROUZ MEHRI/AFP/Getty Images

In Iran, concerns are growing that banks may be facing the same fate as credit and financial institutions (CFIs), many of which are believed to be on the verge of collapse. CFIs, many of them unlicensed, have caused major disruption in the Iranian financial system in the past decade. The Central Bank of Iran (CBI) is under rising pressure from the parliament to immediately regulate these nonbank credit institutions, as an increasing number of depositors protest delays in the settlement of dues by a number of troubled CFIs. The situation has become so dire that the Supreme National Security Council has been dragged in. Now, there are fears that banks could be next. To avoid this scenario, pundits are suggesting that the CBI be granted more autonomy by the parliament so that it will take more serious disciplinary measures against all financial institutions when necessary.

For the past three years, the administration of President Hassan Rouhani has been trying to pass a bill in the parliament that seeks to grant more autonomy to the CBI. Certain influential bodies, however, have blocked the legislation, said former Bank Saderat CEO Ahmad Hatami in an interview with the Fararu news website June 10, without naming any particular organizations. The banking expert warned of a crisis point in three years or so if the CBI fails to reform the banking system.

The Iranian financial system has not been stable in the recent past due to external pressure and domestic mismanagement. A recent CBI report that reviewed commercial banks, specialized banks, state banks, and credit and financial institutions depicted a generally grim picture of how private banks handle their debt. Drawing on the report, leading business daily Donya-e Eqtesad wrote June 9 that total bank debt to the CBI increased by 19.2% to 996 trillion rials ($30.5 billion) in March 2017, compared to a year before. As detailed in the table below, commercial and specialized banks had a better performance. However, the private banks’ and CFIs’ debt grew by 206% in the last Iranian fiscal year.

Meanwhile, banks failed to collect money owed by the government during the last Iranian calendar year. The debt of government and state-run enterprises to the banking system, excluding the CBI, surged by 33.1% in the Iranian year ending March 20, reaching 1.6 quadrillion rials ($49.1 billion). Separately, the government also owes the CBI 576 trillion rials ($17.6 billion).

The huge government debt is putting excessive pressure on the banking system, which has additionally suffered from a liquidity squeeze. Yet thanks to the sluggish economy and high interest rates, the total value of deposits in Iranian banks increased by 23.9% to 12.1 quadrillion rials ($323.7 billion) in the review year, the English-language Financial Tribune reported July 11. The rise in deposits shows that the Iranian public still trusts banks, even as many CFIs have collapsed.

Banks generally become insolvent once they are unable to pay their debts for two main reasons: when their liabilities may be worth less than their assets — which is not the case in Iran — or when banks cannot pay debts, even though their assets may be worth more than their liabilities. The latter, known as cash flow insolvency or a lack of liquidity, may be looming if the CBI continues to delay implementation of reforms and if the government remains unable to settle its hefty debt to banks.

In his June 10 interview, Hatami said Iranian banks are not in a good state, but that the situation is under control. He insisted that banking reforms must be implemented immediately; if not, the industry will face a potential cash flow crisis in the coming years.

Iranian banks need access to cheap financial resources available in multinational banks. To that end, they ought to have transparent and globally standardized balance sheets and statements that can facilitate comparisons of their status. This time-consuming process has already begun, but it could take months for it to become the norm.

The capital adequacy ratio (CAR) of Iranian banks is another issue that needs to be imminently addressed. The CBI has already ordered a dozen banks struggling with low CAR not to distribute annual profits to shareholders. Instead, the banks are urged to use the profit to raise their capital so they can maintain their CAR at a minimum level of 8%. Three of these banks had a capital adequacy ratio of less than 4% in the Iranian fiscal year ending March 20, 2016. In this vein, the CBI has issued a directive allowing only banks with CAR above 8% to distribute profits from the previous Iranian fiscal year to shareholders. Annual reports pertaining to the last Iranian year have yet to be published.

Almost all banking experts in Iran believe that the CBI needs a freer hand in regulating the market and implementing banking reforms. The judiciary and parliament can play a key role by helping the regulator make sensitive decisions without having to consider pressure from politicians who may oppose changes to the status quo. The Iranian public expects Rouhani’s second-term Cabinet to be more proactive and aggressively lobby lawmakers and influential moderate conservatives in the Office of the Supreme Leader to help pursue tougher policies to regulate troubled CFIs. As such, the Iranian authorities must help restore the banking system's ability to lend by weeding out nonviable CFIs and banks. If Rouhani fails to advance major banking reforms during his second term, his successor may be faced with a situation in which it may be too late for reforms to stave off a serious banking crisis.