Despite the Iranian government’s decision to repay billions of dollars owed to local banks, in the broader picture, it will remain saddled with problematic debt until it turns to bonds rather than loans for financing. 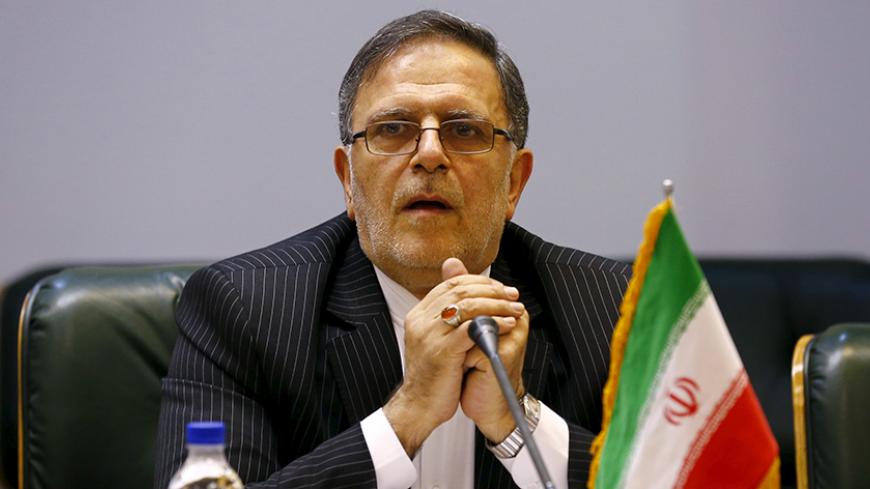 Valiollah Seif, the governor of the Central Bank of Iran, waits to start a meeting in Tehran, Aug. 23, 2015. - REUTERS/Darren Staples

The administration of Iran’s President Hassan Rouhani made three decisions on Jan. 30 that officials say will financially shore up commercial banks until the end of the Iranian fiscal year on March 20. However, the moves are widely seen as not enough to enable banks to lend money to businesses.

In their first decision, Cabinet members agreed that the Management and Planning Organization will allocate 146 trillion rials ($4.5 billion) in funds from the surplus account of the Central Bank of Iran (CBI) to the Keshavarzi, Melli, Refah, Sepah, Mellat, Saderat, Tejarat and Industry & Mine banks, as part of repayment of government debt to the banking system.

The Cabinet also authorized the eight banks to collectively issue up to 100 trillion rials ($3 billion) worth of Islamic bonds in the Iranian debt market by the end of the fiscal year. According to the latest statistics released by the CBI, total government debt to banks reached 1,432 trillion rials ($44.2 billion) in the Iranian month ending Nov. 20, up from 596 trillion rials ($18.4 billion) in March 2013. As such, while substantial, the sum set to be paid by next month accounts for as little as 17% of total government debt to banks.

The Rouhani administration made a third decision during its Jan. 30 meeting that will benefit six banks, including the Export Development Bank and the Cooperative Development Bank. The decision allows the Ministry of Economic Affairs and Finance to increase government shares in state-owned banks by 200 trillion rials ($6.178 billion) in capital collectively by year-end, as shown:

The funds for the latter payment are also set to be withdrawn from the CBI’s surplus account, which holds some 700 trillion rials ($21.6 billion). These funds are believed to have been secured in the course of the year since the nuclear deal's implementation day on Jan. 16, 2016.

The Rouhani administration is thus using half of the funds available in the CBI’s surplus account to cover an insignificant portion of its debt to banks. However, this debt is seen as a major cause of considerable pressure on banks' balance sheets in recent years, leading economic newspaper Donya-e Eqtesad reported Jan. 31.

On the other hand, the government is also in debt — to the tune of 354.8 trillion rials ($10.9 billion) — to the CBI itself, the Reformist newspaper Ebtekar reported Jan. 30, citing Tehran-based economist Mehdi Pazuki. Conservatives say the sum was 131.6 trillion rials ($4 billion) in March 2013, blaming the CBI for having failed in the past 3½ years to keep up with monetary policy developments. Fars News Agency said in a Jan. 29 report that lack of monetary discipline had caused the monetary base to increase by 70% since 2013, rejecting pro-administration claims that it has remained almost unchanged since then. Pazuki argued in Ebtekar that the government debt to the Central Bank is composed of trillions of rials in promissory notes pledged as collateral to the National Treasury. These government-backed documents, he said, have had no impact on the monetary base. The official newspaper of the administration, Iran Newspaper, went further and showed in a detailed Jan. 22 report that the government's debt to the CBI has even decreased since Rouhani took office in 2013.

Whatever the basis of these calculations, some 1,340 trillion rials ($41.4 billion) in debt to the CBI and commercial banks will remain unpaid — even if the government can keep its promise to implement these changes by next month.

The total government debt to banks, the CBI, the Social Security Organization and contractors is estimated at about 5,120 trillion rials ($158.3 billion), according to Hamidreza Hajibabai, the head of a parliamentary panel in charge of reviewing the 6th Five-Year Development Plan (March 2017-March 2022). In a program aired on Iranian state TV on Jan. 31, Hajibabai dismissed the possibility that the administration will be able to entirely settle its debts within the next five years. Instead, he said that parliament expects government debt to account for some 40%-45% of gross domestic product (GDP) by 2022.

The point here is that the government’s debts already account for slightly more than 40% of Iran’s $393.7 billion GDP (the latter estimate reflected in World Bank data from 2015). This means that policymakers do not expect government debt to fall in the coming years. Rather, it is projected to remain unchanged at best. Thus, the only option remaining for the government is to take maximum advantage of a strong bond market to shift from loans to bonds for financing. Expansion of the bond market will enable the government to finance fiscal deficits without having to be concerned about the inflationary impact of borrowing from the banking system. Given the government’s ballooning expenditures and the depreciation of the national currency, the government must therefore be swift to make use of alternative sources of financing.