Why high inflation may return to Iran

The Central Bank of Iran is urging banks to slash deposit rates in the hopes that money locked in savings accounts will be channeled to manufacturing and capital markets. 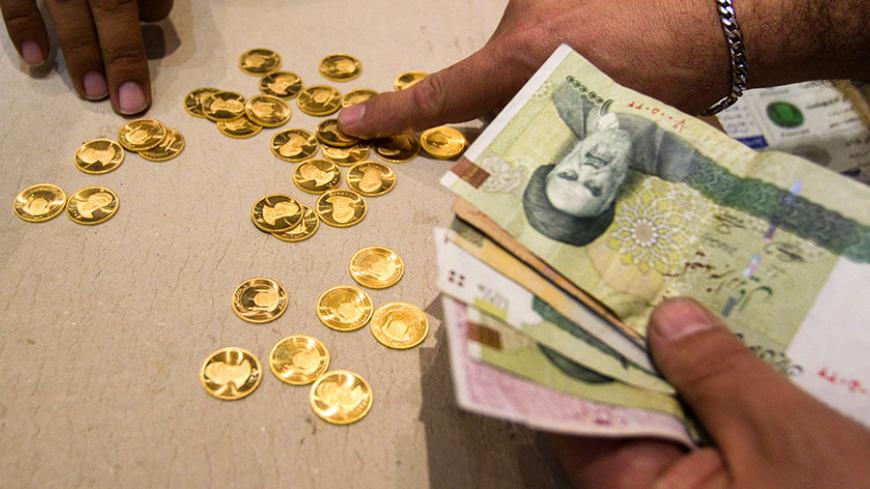 TEHRAN, Iran — Top Iranian banking executives agreed Feb. 13 to cut the deposit rate of one-year rial saving accounts by two percentage points — from 20% to 18% — for the second time this Iranian calendar year (ending March 19). The decision came after persistent calls by monetary authorities on banks to set interest rates based on inflation, which now hovers around 12% — down from 40% in mid-2013, when President Hassan Rouhani was elected.

A day after the announcement, the Money and Credit Council approved the suggested rate, saying all commercial banks and financial institutions will have to comply as of Feb. 21. The council also lowered the business loan rate ceiling from 24% to 22%, in an attempt to make loans more affordable. Abdonasser Hemmati, head of the state banks coordination council and CEO of Bank Melli, on Feb. 13 warned financial institutions against violating the imposed rate cuts. Three days earlier, in a TV program broadcast on state television, he had said that the ideal deposit rate is 16%, given the lower inflation.

The Central Bank of Iran (CBI) is urging banks to slash deposit rates in the hopes that money locked in savings accounts will be channeled to manufacturing and capital markets — both sectors of which are in desperate need of a financial boost.

Most Iranian banks are now reconnected to global transaction network SWIFT after a four-year hiatus due to sanctions, and the government is also vowing to repay a major part of its debt to the banking system. These developments are seen as incentives for banks, which will probably see a fall in money cost and a rise in financial resources. The only major problem yet to be addressed is the issue of non-performing loans, which are estimated at one quadrillion rials ($33.1 billion). Officials hope that as the economy recovers in the post-sanctions era, industrialists will be able to gradually repay their debts to banks.

Yet, what seems to have been absent in remarks made by Iranian banking officials in recent weeks is the potential negative impact of the falling interest rates on inflation. Indeed, the CBI is now being warned by some analysts against looming growth in the country’s money supply and a possible return of high inflation.

According to the latest CBI data, money supply grew by 27.2% in the 12-month period ending Jan. 20 — the highest in the past 12 to 18 months. Money supply has grown every month the current Iranian calendar year (that started March 20, 2015) by 2% on average, but in the month to Jan. 20, it grew 0.8% higher than the average. In this vein, there are fears that the money supply will increase from around 9.5 quadrillion rials ($314.9 billion) in the month to Jan. 20 to 10 quadrillion rials ($331.47 billion) by year-end (March 19), said Abolghasem Hakimipour, a lecturer at Allameh Tabataba'i University, in a recent interview with Mehr News Agency.

Of note, money supply has increased by more than 4 quadrillion rials ($132.59 billion) since Rouhani took office as president in July 2013, according to Masoud Mirkazemi, a parliamentarian and former minister of petroleum. Yet surprisingly, inflation has been plunging ever since. One of the reasons that inflation has decreased — despite the ongoing growth of money supply — is that a large part of the money supply is locked in banks. Indeed, nearly 86% of the money supply, in the first and second months of the current Iranian fiscal year, pertained to money held in long-term saving accounts, which can be converted into cash, with a delayed inflationary impact. Hence, the CBI must be on alert. Since the deposit rate is set to fall further, more cash is likely to leave the banks. And as the money supply determines the level of prices and inflation in the long run, the CBI has to be very careful while adopting an expansionary policy to guarantee stability in the manufacturing sector.

As a solution to the looming crisis, some economists suggest that policymakers should avoid excessive lending to the government. Reza Boustani, an economic analyst with the CBI, noted in an editorial published by leading economic newspaper Donya-e Eqtesad on Feb. 16 that the excessive borrowing of the government and commercial banks from the Central Bank will definitely lead to an increase in the money supply. He warned that in the medium term, when the CBI will want to change policy and cut off the money supply, it will fail to make the government repay its debt. On the contrary, lending to commercial banks could be much safer, he wrote, arguing that banks can provide high-quality collateral in exchange for the loans they receive, enabling the CBI to control the money supply and thereby the level of prices just the way it plans. Boustani’s suggestion seems to be reasonable as banks have already excessively invested in non-banking assets, including land and property, during late 2012 and early 2013 when housing prices increased rapidly. Those assets can now be used as collateral with the Central Bank.

Among other steps policymakers have taken in the past year to help boost lending are the lowering of interbank lending rates from 29% early in the current Iranian fiscal year to 18.5-19%, and also the cutting of the reserve requirement ratio from 13% to 10%. These developments as well as the recent lowering of interest rates, coupled with the sanctions relief and the expansionary policy adopted in the second half of the fiscal year, may ultimately lead to a sudden increase of cash in the economy. Given the vulnerability of the Iranian economy to high inflation, policymakers must thus be on alert and plan ahead to neutralize possible harm to investors and industry alike.