Toxic loans coupled with crippling sanctions have led Iranian banks to be running out of capital, pushing deposit-taking banks to offer higher rates than monetary officials insist on. 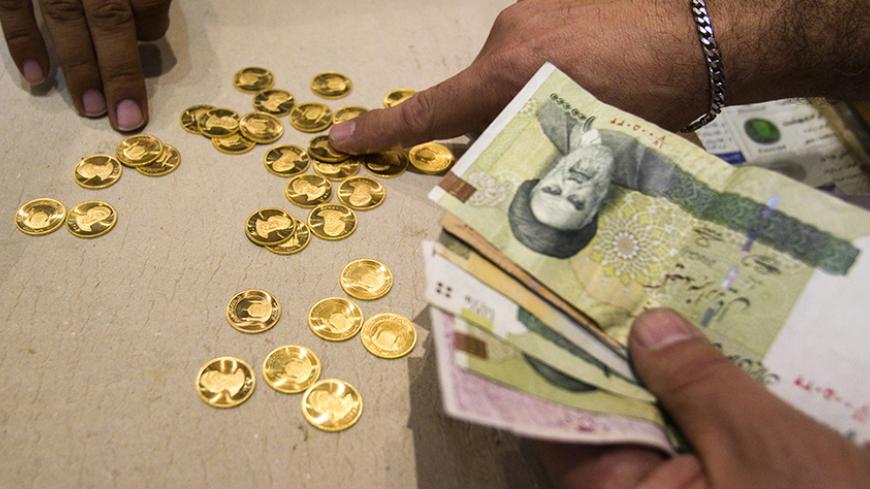 More than 30 commercial banks and over a dozen credit institutions are involved in a tight competition to collect billions of dollars in cash, which are in the hands of nearly 80 million Iranians. Previously, the most effective tool the financial institutions used to attract cash from savers was a generous offer of an interest rate of around 27%. That is considered illegal now. Earlier, the Central Bank of Iran (CBI) and CEOs of commercial banks reached an agreement that the institutions should not offer a deposit rate of more than 22%. The agreed ceiling, however, has been violated in many cases.

On Feb. 23, Abbas Kamrei, a board member of Bank Melli, the largest state-run commercial bank, criticized CBI's interest rate policy as incorrect. He said any change in the deposit rate ceiling must be made in such a way that "both markets' stability and savers' trust remain unhurt."

Monetary officials claim that they are not going to dictate interest rates, but in practice they have been pressurizing banks and credit institutions to cut deposit and loan rates in accordance with inflation, which has been on a downward trend since the fourth quarter of 2013.

The CBI has focused on restricting the monetary base and raising profit rates on participatory loans to curb inflation over the past 18 months. The policy has been a successful attempt as inflation dropped from 34.7% in the year up to March 20, 2013, to 15.8% in the year up to Feb. 20, 2015, according to CBI data.

Though Kamrei admitted that lenders must consider the disinflation trend while setting a ceiling for interest rates, he urged CBI officials to take into account the public expectations from banks.

Monetary officials argue that current rates are unfairly higher than the inflation rate, and that could damage the economy since manufacturing units — suffering from a lack of cash flow — will remain deprived from the liquidity being accumulated in banks.

Critics have their own arguments. They say the reason behind the defiance of banks to follow the CBI’s instruction is that they currently have billions of dollars in nonperforming loans. As put by Gholam-Hossein Mohseni-Ejei, the judiciary spokesman, bad loans amount to $72.2 billion (at the official exchange rate). Mohseni-Ejei was the second top official in weeks, after Ali Tayebnia, the minister of economy, who confirmed the massive figure, which is more than twice the amount already announced.

Toxic loans coupled with crippling sanctions have led Iranian banks to be running out of capital, pushing deposit-taking banks to offer higher rates than monetary officials insist on. But even if the banks want to, they simply will not be able to abide by the CBI.

The latest fiscal reports of 16 private and semi-private banks listed in the Tehran Stock Exchange (TSE) indicate that over 1 trillion rials ($36.1 million) out of the total 3.24 trillion rials ($116.9 million) saved in long-term deposits have been put in 5-year deposits only, and the rest in 1-4 year deposits. That means the banks will have obligations to thousands of customers, who opened deposits in 2014, by 2019 to pay an interest rate of about 27%. The reports also indicate that 80% of the long-term deposits in the 16 banks will be due in no less than two years from now — by March 2017.

High deposit rates will raise the cost of money at least in the next couple of years, forcing lenders to impose an interest rate of 24-30% on business loans. That will negatively affect the business environment in general and the manufacturing sector in particular, which already suffers from a lack of cash flow.

On Feb. 24, Mohammad Reza Nematzadeh, the minister of industry, mine and trade, criticized the CBI for charging banks 34% interest when they borrow from the central bank. "To compensate the costs, commercial banks have no option but increasing loan rates to 30%," he said at a gathering in Tehran attended by TSE officials, the CBI governor and economy minister.

Higher loan interest rates will additionally pressure manufacturers, who seek financial solutions to their cash flow problems, resulting in a recession in the manufacturing sector. On the other hand, high deposit rates encourage more individuals to transfer their cash to banks, which they believe are a safer place for investment given the sluggish economy.

In the past few years, many traditional merchants in Tehran and other big cities opted to turn their assets into cash and save it in long-term deposits to minimize business risks, a Tehran-based merchant involved in the heating and cooling system business told Al-Monitor. The middle-aged businessman said he sold his assets, including his office and home, in 2012, when sanctions intensified, to invest in bank deposits. “With banks offering an interest rate of 27-28%, I make more profit than I do in my own business,” he said.

The flow of cash from businesses into bank accounts could temporarily resolve a lack of bank capital, but it would lead to an accumulation of liquidity in banks, rather than in productive industries. Furthermore, it could push deposit-taking banks to get involved in speculative activities or at best to offer expensive business loans. Among other repercussions, experts are warning that the monetary base might radically increase if the inflow of cash to the banking system continues in the absence of a comprehensive plan, pushing inflation further on an upward spiral again as we head into the new year (starting March 21).

Although authorities appear to be confident about their ability to further tame inflation in the upcoming fiscal year, the threat is still looming if they fail to manage the money supply, which grew 27.9% year-on-year in the month to Jan. 20, a relatively safe way.

Other issues could also help trigger a spike in inflation. International sanctions, which already caused shortages, further price rises related to subsidy reform programs and devaluation of the rial, which is a risk given the fall in oil prices, raise fears of an upward shift in inflation. If that happens, growth forecasts for production and gross domestic product in the next couple of years could be revised downward.