The Iranian president may feel under pressure to expand government benefits, but it should stay focused on growth strategies. 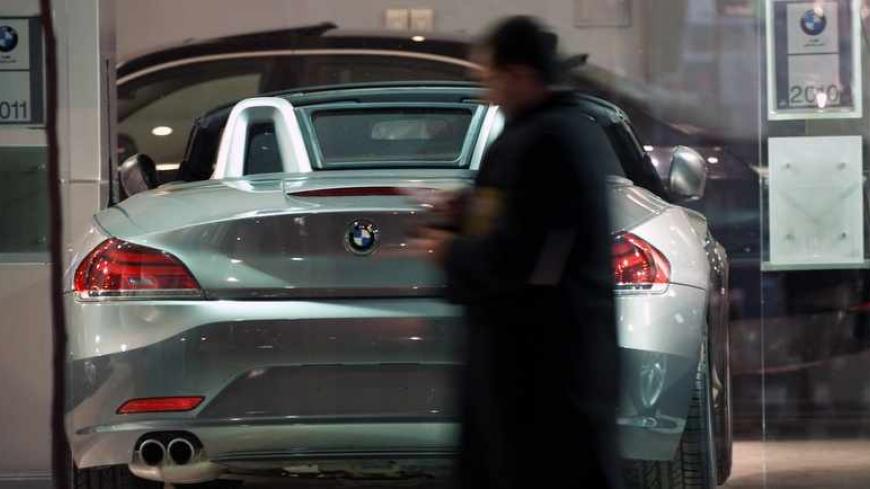 An Iranian man walks past a BMW displayed at a car shop in central Tehran, March 1, 2012. - REUTERS/Morteza Nikoubazl

On Nov. 26, Iranian President Hassan Rouhani appeared on live television to present a progress report on his government’s performance in its first 100 days in office. Evidently, the president was content that the Geneva agreement had been signed, drawing a road map for the resolution of the nuclear file. In fact, the country’s business community and economic commentators had reacted positively to the Geneva deal — a fact that was underlined in the appreciation of the Iranian rial on the free market.

Nonetheless, it seemed that Rouhani had decided to use the televised interview to present the depth of the economic crisis that the country was facing. The most significant economic passages of the president’s communication include:

Phenomena that contributed to high inflation:

Obviously, the viewers were more interested in how the new administration plans to curb the economic crisis and to return the country to a certain degree of normalcy. Rouhani outlined a number of initiatives and policies, which will be critiqued below.

Continuation of the subsidy reforms: Obviously, the government will have no choice but to implement the second phase of price corrections, though it will have an inflationary impact on the economy. Rouhani announced that the second phase would only be initiated after some changes to the program after the implementation of the planned banking reforms. The anticipated changes are a discontinuation of cash-handout payments to the higher-income classes and the introduction of some payments in kind (such as foodstuffs and other basic goods) to the lower-income classes.

The key challenge will be to continue the subsidy reforms without exploding the money supply and without increasing the government’s debt to the banking sector. The government will have to resort to non-cash subsidies to the lower income classes and also to a balance between government revenues and expenses within the subsidy program. The key element in the process will be to find ways to stop the corruption in the system — the same corruption that allowed the old system to end up with a number of cash-handout recipients higher than the total Iranian population.

Containing inflation and promoting economic growth: The president underlined the government’s resolve to fight inflation and to reduce it to 35% by the end of the current year (March 20, 2014) and to 25% by March 20, 2015. He emphasized that the main tool will be containing the money supply. However, this is the trap that previous governments have fallen into; it is a challenge to limit liquidity growth in a cash-based economy with an inherently high perceived inflation (which is reflected in high bank interest rates). Therefore, the government and the central bank will need to develop a much more comprehensive plan to contain inflation — one that will generate added value in the economy without requiring major government funding (such as the promotion of tourism as well as exports).

Business climate: Rouhani also declared that the improvement of the country’s business climate would be a high priority for the coming year. Here, a number of changes are already implemented — easier access to capital and reduction of tariffs — but many more will be needed to remove the obstacles to sustained private-sector activity in the Iranian economy. The president referred to the prevalence of a security-dominated climate in all aspects of life, including business activity. The president’s promise to push back against this phenomenon and to open up space for private enterprises will require limiting the scope of activities for semi-state institutions and a reform of the judicial system to allow more protection for investments.

Promotion of the agricultural sector: The president also focused on the government’s desire to reverse the trends in the agricultural sector. He noted that in the current Iranian year, the government had to import 7 million metric tons of wheat, part of a negative trend since 2004, when Iran had achieved self-sufficiency by producing 11 metric tons of wheat domestically.

Sanctions relief: Finally, the government’s resolve to push back external sanctions and return a certain degree of sustainability and stability to the Iranian economy was discussed. He painted an optimistic outlook for the nuclear negotiations and called on the business community to start investing in the Iranian economy.

There is no doubt that the Iranian government is facing many economic challenges and that tackling all these issues will be a huge task. In fact, the challenges are so complex that it is difficult to identify an appropriate entry point. For example, one of the key issues in the economy — unemployment — was not even discussed. Though it is valid that the improvement of the business climate and the promotion of the agricultural sector will lead to job creation, the economy will need much more than short-term solutions.

The following puts the unemployment situation in perspective: Experts say the Iranian economy needs to grow by 8% annually to create enough jobs for its annual number of job seekers (about 800,000). According to Rouhani, last year, the economy stagnated by 5.8%. This year, it will experience zero growth and next year, the optimistic forecast is for 3% growth. This means that unemployment will grow, leading to further socioeconomic issues and tensions.

As such, managing the expectations of society for economic improvement is the right path, and it is clear that the government is engaged in expectations management. However, considering the depth of the crisis, it is tempting for the government to move toward becoming a “provider” of basic goods and grants to the low-income classes. That approach would be a regression, and it certainly would be a better path to opt for a growth scenario through unleashing some of the locked potential in the Iranian economy such as tourism, expansion of the gas sector and promotion of gas-based industries that could unleash export potential. To achieve this, the government needs to produce a medium- to long-term strategy addressing all bottlenecks that the economy is facing.