Tehran announced the country’s unemployment rate declined somewhat recently, but not everyone benefited. 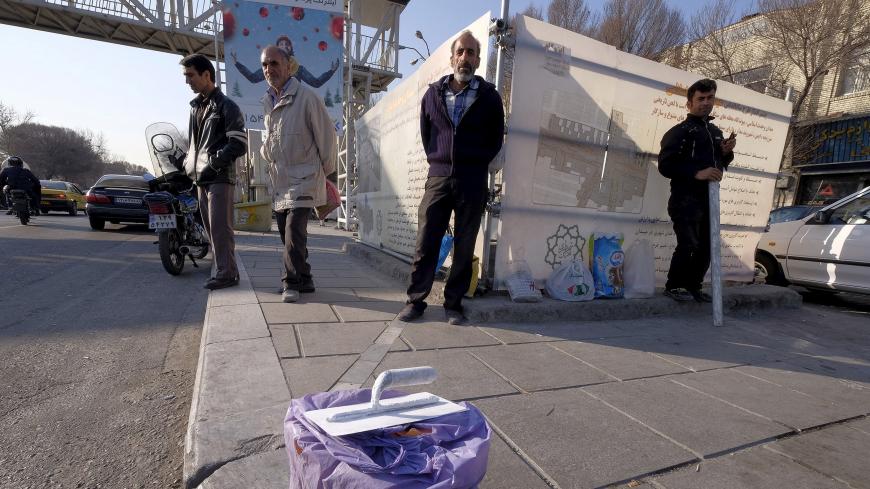 Unemployed labourers stand on a sidewalk as they wait for job offers, in Tehran, Iran, Jan. 20, 2016. - REUTERS/Raheb Homavandi/TIMA

Iran’s unemployment rate fell by about 1.3 percentage points in the first quarter— which ended June 21 — to 10.8%, down from 12.1% in the corresponding period a year ago, according to a report issued by the Statistical Center of Iran.

But the jobless rate remained remarkably high in the working age group of 15 to 29. It stood at 23.7% for them, with the rate among young men and women hovering around 20.5% and 35.3%, respectively, indicating women are among those severely hit by perhaps unjust work conditions.

According to data compiled by the SCI, the overall unemployment rate for the quarter was noticeably less than the corresponding quarter in each of the past three years. However, the decline wasn’t due to a sizable spike in job creation but rather because of a significant rise in the number of people who have stopped looking for work.

The labor force participation rate declined 0.5%, to 40.6%, compared with the same quarter last year. A survey conducted by the Parliamentary Research Center estimates that if those who left the labor market during the period were still counted, the unemployment rate would have risen about 1.6%, with the overall unemployment rate notching up 3.1 percentage points to 13.9%.

Also, official statistics show that the country’s economic growth has been dismally decelerating. The World Bank said Iran’s gross domestic product (GDP) shrank 4.9% during Iran’s 2018-2019, following the 1.9% contraction from the year before (2017-2018).

The unsustainable economic growth has trended downward in recent years, taking its toll on job creation. As the data indicate, only half as many people secured jobs in the just-ended quarter, compared with the same period in the previous year. That resulted in a drop in the participation rate.

This is while employment growth has not been accompanied by productivity gains, and the majority of job opportunities have been in the low-level service sector.

Furthermore, a report recently issued by the Ministry of Cooperatives, Labor and Social Welfare highlights three items as the major contributors to overall unemployment in Iran: temporary work, low-income jobs and dismissals/workforce adjustments. Additionally, many experts believe the reason behind the meager growth in employment numbers is the emergence of informal employment: Many workers don’t see a future in their jobs.

Over the past 10 years or so, about 8 million people have joined Iran’s working age population. This is while, during the same period, just slightly more than a million jobs have been created — accounting for only 16% of the total labor force joining the market. Some experts believe funds designated for creating jobs were erroneously used to finance poor-performing firms and/or pay off deferred debts of enterprises, though certified credit-rating agencies weren’t available to assess credit risks. Because of this, they say, the figures are showing no improvement in job creation.

The Iranian parliament’s think tank believes the solution to lowering the unemployment rate will require a thorough examination of the job market, adopting a strategy for job creation, and regulating all monetary, credit, currency, commercial and industrial policies. However, labor market pundits argue that issues such as improving the business climate, aligning market orientation with national priorities, and addressing market shortcomings are not factored into government employment plans. Unless economic growth can at least maintain the projected levels, there will be no qualitative change in that growth and the jobless figure is expected to climb.

More than one-third of employees in Iran have less than 10 years of experience, with 69.5% having less than 15 years of experience. As such, the unemployment turnover rate is hovering around a hazardous zone in Iran. This is invariably bound to prevent the accumulation of experience in various skills in Iranian businesses, as workforce proficiency levels seem to be trending downward. This phenomenon explains why there are widespread job changes among the working population. In both the service and industry sectors, workers enter and exit rapidly — a sign that jobs in these sectors are suffering premature deaths.

The key point is that the rise in employment without added value can’t continue for long. The shrunken economy will undoubtedly affect the purchasing power of poor workers in the next two to three years. If inflation and price shocks persist, it’s very likely that job creation will be restricted to the service sector. However, despite its large share of the Iranian economy, in GDP and employment, the service sector can’t support the industrial sector. Due to a large number of speculative and financial intermediary activities, jobs generated in service aren’t sustainable and fail to boost the industry sector, as is the case in developed counties.

The industrial sphere needs capital to help production — and capital is the offspring of national savings. Ultimately, however, allocating excessive money and credit that could burgeon the monetary base can’t boost manufacturing. Therefore, if policymakers aim to solve labor market problems or at least mitigate the long-term negative effects on the Iranian populace, they need to create the required environment for economic growth. Not doing so will not only worsen Iran's labor market dilemma, but it might have unavoidable ripple effects on other sectors of the economy as well, slowing economic output.

In sum, deep structural reforms are needed to enable the private sector to grow and create the jobs required to stem high youth unemployment. These reforms include addressing risks, redefining the state’s role, stamping out corruption, improving the business environment and employing more of Iran’s highly educated women.