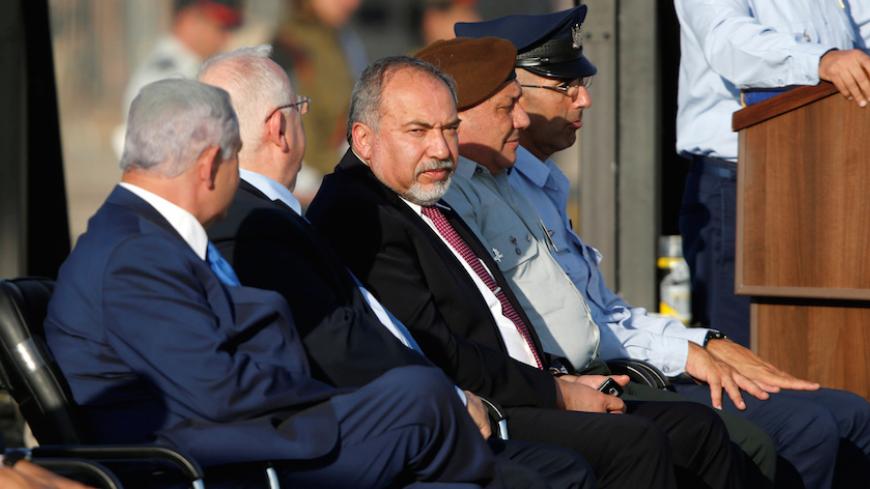 The first order that Avigdor Liberman gave when he entered the Defense Ministry in Tel Aviv May 31 was to complete an operative plan to defeat Hamas in the Gaza Strip. According to one senior security source, Liberman expressed disbelief that no such Israel Defense Forces (IDF) plan was elaborated.

The policy advocated by his predecessor Moshe Ya’alon did not aim to defeat Hamas, overthrow its government or reoccupy Gaza. Instead, Ya’alon supported a policy of “containing” Gaza (adjusting to the existing reality), isolating Hamas and postponing the next conflict for as long as possible. All of this was based on the assumption that right now, there is no rational alternative to Hamas, and that Israel should not involve itself in changing the regime in any neighboring Arab state or entity. Liberman arrived with a very different approach, shaking up the entire system.

No, he doesn’t think that Israel should conquer the Gaza Strip, summon former Fatah senior Mohammed Dahlan and install him in power over the local residents. Even he knows that these kinds of plans will eventually come crashing down, leaving more damage in their wake. The last time Israel attempted such a move, during the first Lebanon War (1982), it ended up mired in the bloody Lebanese swamp for almost 20 years, and with Hezbollah emerging as the most powerful political and military force in Lebanon.

Besides, while Dahlan may be considered ''close'' to Liberman (reportedly, Liberman met with Dahlan in Paris last January), he is unfit to govern in Gaza, or at least Liberman thinks so. Dahlan leads an easy life. He has all that he can want, he travels the world and he lives well. At this stage of his life, he lacks the constitution to throw himself into the sewer that is Gaza.

On the other hand, Liberman does believe that the Gaza Strip is ready to overthrow Hamas. The group’s standing among the general population is being challenged, and quite a few of the local clans and tribes are already seeking an alternative. In the event that Hamas is deposed, the Egyptians could play a productive role by offering Gazans a change in policy. They could open the Rafah border crossing and provide aid, on condition that the people of Gaza install a saner leadership with no ties to the Muslim Brotherhood, a group that Cairo deems beyond contempt.

Liberman believes that Hamas is the ultimate evil. As such, its regime must be brought down, and its growing stock of rockets, within touching distance of the southern city of Ashkelon, must be eliminated. Furthermore, the defense minister believes that if Israel doesn’t do that now, within just a few years it will have another Hezbollah on its hands, this one along Israel’s southern border. That is why Liberman has instructed the IDF to prepare an operational plan to defeat and overthrow Hamas in the next round of fighting.

Will that next round of fighting occur soon? It remains an open question. Right now, the stability of Netanyahu’s government depends largely on the police inquiry/investigation into the prime minister’s dealings. Liberman wants to serve at least one year as defense minister, since this will allow him to keep his promise. It is not at all clear if he has that year.

It has been a little more than five weeks since he assumed the position of Israel’s defense minister, and Liberman is enjoying every moment of it. He never worked so intensely. He had it easy as foreign minister, with all sorts of little indulgences. In the other ministries, he was never known as someone who worked from dusk to dawn, and certainly not around the clock. His attention span is limited. He is not the kind of person who looks at things at the highest resolution, and prefers to leave the little details to his staff. He lets the chief of staff and the General Staff do their jobs, without involving himself in appointments, because he has no interest in the minor processes. He is focused on the directives involved in establishing overall policy.

Liberman is no longer willing to receive a presentation of all possible scenarios that the IDF provides before every operation. The outcome must always be the same: There should be just one possible result, under any and all circumstances, in any encounter, on any issue. As he tells it, the result must be decisive. Israel must not leave any conflict without a decisive, clear (winning) outcome.

One security source confided that Liberman is excited about the IDF’s High Command and says that there hasn’t been a General Staff like this in a very long time. His relationship with Chief of Staff Gadi Eizenkot is quite successful.

In a security Cabinet meeting July 3, bellicose right-wing Education Minister Naftali Bennett attacked one of the generals who briefed the ministers by subjecting him to an endless barrage of questions. Suddenly Liberman interrupted the discussion and instructed the general to stop answering Bennett. According to one security source speaking on condition of anonymity, Liberman said to Bennett, “Wait until he’s finished speaking and then ask your questions.” Though the education minister still insisted on quizzing the general, he didn’t get any more answers. After that heated meeting, Liberman received several enthusiastic reactions from his generals. “We’ve been waiting a long time for someone to put Bennett in his place,” said one general to Liberman.

When it comes to Judea and Samaria, Liberman’s position is different from that of the defense establishment. Given this, he is expected to get into quite a few conflicts with the General Staff and the Shin Bet. For one thing, Liberman believes that Palestinian President Mahmoud Abbas is Israel’s worst enemy and that Israel should strive to end his rule. He considers Abbas’ diplomatic offensive against Israel to be particularly serious, in fact, no less serious than a military offensive.

Here, too, Liberman doesn’t really know what “the day after Abbas” will look like.

Like many others in the security establishment, he believes that there is no single successor to fulfill all of Abbas’ three roles: head of Fatah, head of the PLO and head of the Palestinian Authority. These three positions will most likely be divided among three claimants to the succession, and the West Bank government will be less centralized. Be that as it may, he does not believe that there will be chaos. He rejects warnings of those prophets of rage, who claim that Israel will be forced to run the Palestinians’ day-to-day life and tend to matters such as health, welfare, infrastructures, education, etc. According to Liberman, there is absolutely no basis for that prognosis.

Israel’s defense establishment has already identified quite a few senior Palestinian officials, who could fill Abbas’ positions. The names of people like Yasser Arafat’s nephew Nasser al-Qudwa or head of Palestinian intelligence Majid Faraj have been bandied about in various scenarios.

Liberman believes that Abbas has completed his historic role and that it is now time for him to go. There is no chance of reaching any type of arrangement with him. If he didn’t say “yes” to former Prime Minister Ehud Olmert’s exaggerated plans in 2008 (according to Liberman), he will certainly be incapable of saying yes to anything else. For that reason alone, Liberman thinks, Abbas' continued presence (or attempts to negotiate with him) is nothing but a hindrance.