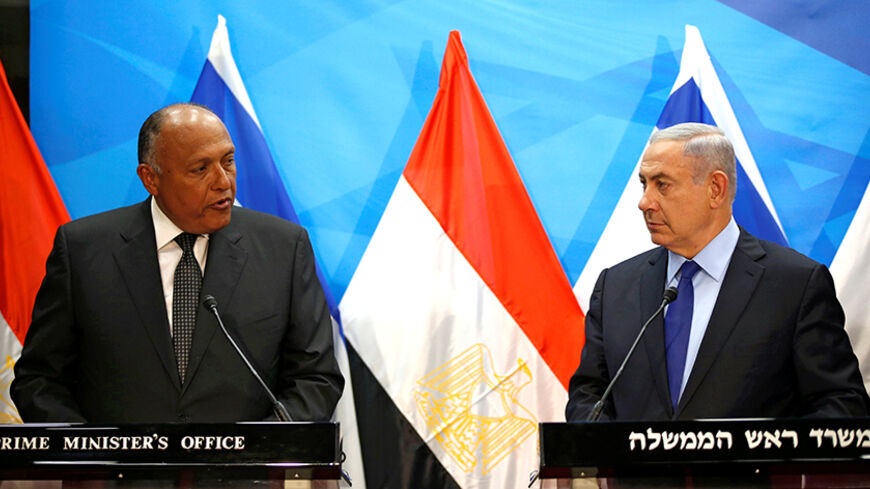 The secret was kept throughout the entire weekend. Prime Minister Benjamin Netanyahu dropped the bomb at the start of his Cabinet meeting July 10: After a nine-year absence, Egyptian Foreign Minister Sameh Shoukry was visiting Israel.

In the past, the visit of an Arab foreign minister to Jerusalem was not such a big deal. Under the current circumstances, however, including a long lack of communication between Israel and the Palestinians, a bitter political struggle and a wave of terrorism, the news from Jerusalem spread quickly across the Middle East.

That same day, shortly after 9 p.m., Attorney General Avichai Mandelblit released a terse announcement that Israel’s law enforcement agencies are looking into Netanyahu. While there is not yet an official investigation, chances are that it will come. This announcement was also a potentially explosive one with repercussions that could reach far beyond the Middle East.

While this news was being announced, Netanyahu was meeting with Shoukry at his Jerusalem residence. They watched soccer, specifically the European Cup's final match between France and Portugal. It was the second meeting that Sunday between Shoukry and Netanyahu, who spent a long time working together in the afternoon.

There is a connection between this surprising visit and the potential police investigation. Netanyahu is fully aware that law enforcement agencies in Israel have collected information that could develop into an investigation against him. He is therefore trying to dominate the agenda and show leadership. In December 2003, when Prime Minister Ariel Sharon announced his Disengagement Plan, there were those who claimed that police investigations into his activities were the main motivator for his decision to evacuate settlements in Gaza and northern Samaria. At the time, political commentator Amnon Abramovich said that the media should protect Sharon and treat him with “kid gloves” precisely because he was making such a historic move.

Following the Egyptian foreign minister’s visit, Bloomberg published a report citing a “former senior Israeli official” as saying that Israel has conducted several attacks on armed Islamic State [IS] militants in the Sinai Peninsula, using the air force’s unmanned aircraft. This was done with Egypt’s knowledge and coordination.

The announcement caused a major commotion in the corridors of power in Jerusalem and Tel Aviv, and could yet cause a similar commotion in Egypt and around the Arab world, which is not keen on Israeli-Arab security cooperation. An accusatory finger was pointed at former Defense Minister Moshe Ya’alon, who is set to take a brief sabbatical at the Washington Institute starting in August. Israeli sources say the news was released to embarrass Netanyahu and damage his honeymoon with President Abdel Fattah al-Sisi.

One source close to Ya’alon denied it vigorously. “Ya’alon has nothing to do with this report,” he told Al-Monitor on condition of anonymity. “He knows how damaging reports like this can be to Israel’s strategic interests.”

According to the same source, the leak came from Netanyahu's direction, in an effort to divert media attention to topics other than the potential police investigation into his own affairs.

Be that as it may, there are many other interests that bring Egypt and Israel together in a single boat. For one thing, Netanyahu is terrified of the possible intersection between the French peace initiative and the window between the US election and the date President Barack Obama leaves the White House. Netanyahu is deeply concerned that the French initiative will be approved by the UN Security Council without being vetoed by the United States, or that the Security Council could pass any other resolution that could unequivocally determine that the settlements are illegitimate. Either could set a huge and potentially deadly snowball rolling.

The best way to reduce the chances of this happening is an alternative diplomatic initiative, which will create an atmosphere of negotiations and improve the mood in the region. This improvement would extend from Palestinian President Mahmoud Abbas, through Amman and Cairo, all the way to Brussels, Paris, Berlin and London.

This is where Sisi enters the picture. He also needs something to bolster his leadership and restore Egypt’s status in the region. With or without Israeli aerial assistance, almost every week, the Egyptians sustain heavy losses in their fight against IS in Sinai. Most of their revenge has been focused on the Gaza Strip, which remains sealed and under siege on its southern border. The Egyptians now need a shakeup of some sort to burst through this dead end.

The problem is that there was a strategic snafu along the way. Instead of Herzog becoming foreign minister, the head of right-wing Yisrael Beiteinu, Avigdor Liberman, took the post. By way of comparison, it was like Donald Trump entering the White House instead of Bernie Sanders.

After Liberman’s appointment, Netanyahu made an urgent call to Sisi, promising him that nothing has changed and that all he needed was a little more time.

It now looks like that time is over. The French initiative is applying pressure on him, the clock is ticking and the police are looking into his affairs. Something must be done.

But the situation right now is hardly simple. Egypt is offering to host a summit between Netanyahu and Sisi in Cairo, to be followed by an open channel of talks there between Israel and the Palestinians. Those talks would revolve around a tantalizingly large bundle of significant benefits and confidence-building measures by Israel, to be followed by the chance of a meeting between Netanyahu and Abbas and perhaps even a regional summit.

There is still one problem left. At this point, Netanyahu lacks a coalition to approve any measure he might take. Even confidence-building measures will almost certainly encounter fierce opposition from Education Minister Naftali Bennett and his HaBayit HaYehudi, as well as quite a few Likud ministers. In these circumstances, it could actually be Liberman who helps Netanyahu overcome this obstacle. All that remains for Netanyahu to do is to show leadership and try to initiate some move or another, even a limited one. The alternative is much worse.