Is Palestinian state only guarantee against Hamas?

The Israeli right fears the campaign has moved from the “Iran nuke danger” to “Hamas’ takeover of the West Bank,” ignoring regional concerns for Israel’s security and aligning with their wish to avoid Hamas empowerment. 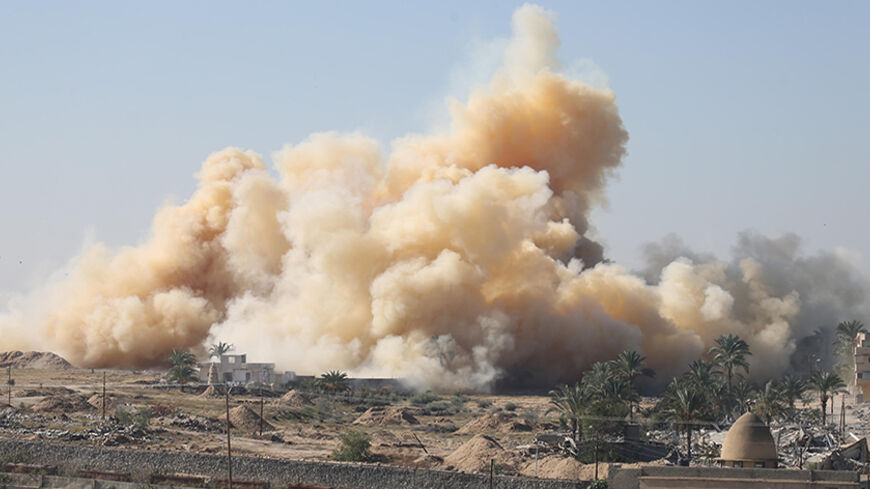 Smoke rises as a house is blown up during a military operation by Egyptian security forces in the Egyptian city of Rafah, near the border with southern Gaza Strip, Nov. 6, 2014 - REUTERS/Ibraheem Abu Mustafa

The main term in the Likud Party's talking points list, and in the scare propaganda of Israeli Prime Minister Benjamin Netanyahu and his party’s ministers, is "Hamastan." On Dec. 20, the prime minister’s office warned that if Labor Party leader Isaac Herzog and his leadership partner, former Minister Tzipi Livni, win the elections, “they plan to withdraw and enable the creation of a second Hamastan in Judea and Samaria.” The next day, Defense Minister Moshe Ya’alon knowingly said it was “clear to all of us that if Tzipi Livni and Buji Herzog had been in power, there would already have been a Hamastan in the West Bank a long time ago.”

Once, they had Iran with which to sow fear. Now, as reported on Dec. 22 by Laura Rozen, there are growing indications that the Iranian nuclear threat is about to be removed from the agenda. Not only that, it is hard to convince the Israeli voting public that if Herzog restores the Labor Party to power, he would give up what is known as Israel’s “qualitative edge,” or, to quote foreign sources, Israel’s exclusivity in the field of nuclear weapons in the Middle East. After all, the people who led the Labor Party were the ones who gave the world the policy of exclusivity.

As far as we know, the prime minister has not reneged on his support for a two-state solution, which he declared in his 2009 Bar-Ilan speech. When Netanyahu and his friends wave around the “Hamastan” threat, they mean to warn the public about a West Bank version of the Hamas takeover of the Gaza Strip following the Israel Defense Forces’ 2005 withdrawal from the region. True, the Hamas rocket attacks from Gaza are not an encouraging precedent for a withdrawal from Israeli-held areas, but even in the period before the withdrawal, hundreds of civilians and soldiers were killed in terror attacks in the Gaza Strip. Even Livni, who was a senior member of the government that insisted on a unilateral withdrawal from Gaza, admits it was a serious mistake. Today, she vehemently objects to any move that is not the result of an overall agreement with the Palestinian Authority (PA); a move that deals with all the core issues, including appropriate security arrangements.

They would be well advised to remember that without Egypt’s cooperation, even the limited achievements of Operation Protective Edge, at the cost of 73 civilian lives (72 Israelis and one Thai citizen), would have been wiped out. In November, Egypt closed the Rafah crossing and set about creating a “sterile” buffer zone, several hundred meters wide, between the Palestinian and Egyptian sections of Rafah. To destroy the tunnel enterprise, Egyptian bulldozers razed to the ground hundreds of houses on the Egyptian side of the border. Cairo insists that the presidential guard of PA Chairman Mahmoud Abbas assume control of the Gaza border crossings, including the Philadelphi corridor in Rafah, under which dozens of tunnels were dug. The Egyptian administration encourages the local media to attack Hamas leaders and to threaten the organization with more drastic action.

In November, Egyptian President Abdel Fattah al-Sisi offered Israel his help in preventing the establishment of Hamastan in the West Bank. In an interview with the Italian daily Corriere della Sera published on Nov. 23, Sisi expressed willingness to deploy an Egyptian force in the West Bank to help the local police increase the sense of security on both sides and strengthen mutual trust. “Israel’s security cannot be compromised,” the Egyptian president said. “The Palestinians must stop carrying out serious actions that can be destructive for them.” He nonetheless stressed that sending a force to a Palestinian state, in full coordination with Israel and as part of confidence-building measures, can only be carried out after the creation of Palestine.

Sisi noted that he had raised the idea in a conversation with Abbas, as well as with Netanyahu. Egyptian diplomats told Al-Monitor this week that Cairo was still waiting for an answer from the Israeli prime minister. They would consider even a “no, thanks” answer to the courageous offer on the part of an Arab leader as a more polite attitude than total disregard.

In addition, the word “security” is repeatedly mentioned in the Palestinian-Jordanian UN Security Council draft proposal. It mentions ensuring “the security of both Israel and Palestine through effective border security and by preventing the resurgence of terrorism and effectively addressing security threats, including emerging and vital threats in the region.” More specifically, it says that “a plan and schedule for implementing the security arrangements shall be placed at the center of the negotiations” and both parties should refrain “from all acts of incitement and provocative acts or statements.” The Palestinian-Jordanian proposal enables Israeli forces to prepare gradually, over three years, for a withdrawal that would end the occupation that began in 1967, and to implement the solution of two states living side by side in “peace and security.”

The Palestinian proposal calls for a comprehensive peace in the region, “which would unlock the full potential of neighborly relations in the Middle East.” The words “potential of neighborly relations” are apparently a refined formulation for an opportunity to form a joint front against the takeover of the Middle East by violent Islamist elements such as the Islamic State and Hamas. The undermined status of the Arab League, following the civil war in Syria and the unstable regimes in Libya and Iraq on the one hand, and the reconciliation initiative between Egypt and Qatar on the other, open up an opportunity for a communication axis between Israel and a joint front consisting of Egypt, Saudi Arabia, Jordan, Qatar and the Palestinian Authority.

And after all is said and done, as Sisi told the Italian paper, the key to Israel’s security, meaning the key to preventing a Hamas takeover of the West Bank and to pushing it out of Gaza, is to be found in the establishment of a Palestinian state next to the state of Israel. As he said, “this is the best way to restore hope for the Palestinians.” This is also the best way to restore hope for Israelis. The day after the Israeli elections, on March 18, we will know whether they prefer the hope of peace or want to hang on to their fear of peace.