Israeli Prime Minister Benjamin Netanyahu will accept Palestinian President Mahmoud Abbas' entry into Gaza, but only if the unity government is dissolved. 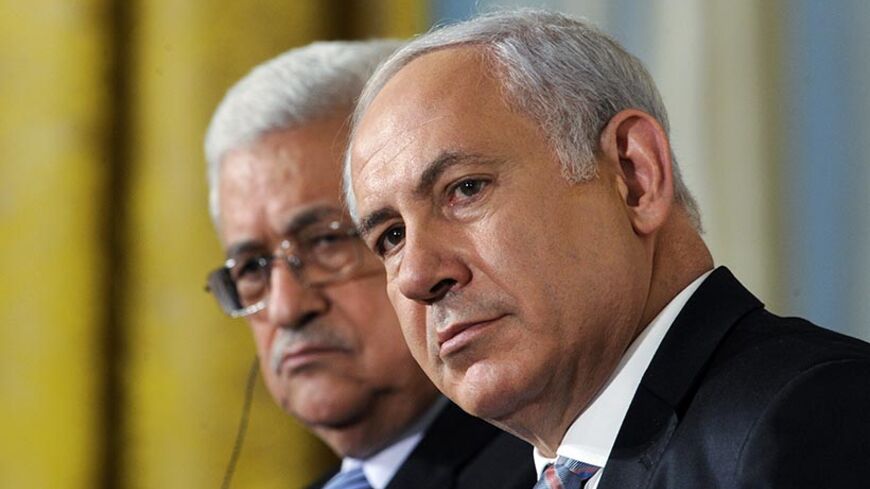 The late Prime Minister Ariel Sharon must have turned over in his grave on Anemone Hill when he heard Prime Minister Benjamin Netanyahu’s declaration at an Aug. 27 news conference about Israel’s victory in the Protective Edge operation. “We would have been happy to see [Palestinian Authority President Mahmoud Abbas] enter the Gaza Strip, rather than Hamas enter Judea and Samaria,” Netanyahu said.

Bring the Palestinian Authority (PA) into Gaza? The whole point of the disengagement from Gaza, with the evacuation of every last settler and soldier from the Katif settlement bloc, was its unilateralism. Sharon firmly rejected handing the Gaza Strip to the Palestinian president and committing to make it a down payment on a future permanent agreement between the sides. Sharon insisted that the PA would not be allowed to claim a scintilla of credit for the withdrawal from Gaza. Sharon’s heir to the premiership, Ehud Olmert, upgraded the Israeli disengagement from Gaza with the separation policy that cut Gaza off from the West Bank.

Since Hamas belongs to what Netanyahu defines as the greater Islamic State family, Israel cannot be expected to “give” the organization seaports and airports within the framework of a cease-fire agreement. On the other hand, in an Aug. 29 interview with Israeli TV Channel 10, Defense Minister Moshe Ya’alon said the implications of a Gaza takeover were the return of the civil administration and the funding of the neglected services and infrastructure that Israel laboriously destroyed, in addition to the billions that Operation Protective Edge was already costing the Israeli taxpayer. Egypt has no intention of re-entering Gaza, either, and at UN headquarters in New York, no enthusiasm was recorded for Foreign Minister Avigdor Liberman's proposal that the organization take the Gaza Strip under its auspices.

We are thus left with Abbas. But reality is far more complex than the story described in Netanyahu’s simplistic formula, “We would be happy to see [Abbas] enter Gaza, rather than Hamas enter Judea and Samaria.” Abbas' goal is not to gladden Netanyahu’s heart. He will not enter Gaza to prevent Hamas from entering Judea and Samaria. The PA will agree to assume responsibility for the welfare of 1.8 million Palestinians in return for a promise that Judea and Samaria, Gaza and East Jerusalem become provinces in a state of Palestine.

The prime minister did say that he saw Abbas not only as Gaza’s future potential governor but also as a potential partner for a diplomatic process to end the conflict. But for this to happen, Netanyahu is demanding that Abbas decide what side he’s on. In other words, for Israel to deign to conduct peace negotiations with it, Fatah must agree to abrogate the reconciliation agreement with Hamas. Justice Minister Tzipi Livni said on Aug. 29 that Israel had conducted negotiations with Hamas and made it a partner for an agreement. But Israel argued that it would not hold talks with Abbas because he conducted negotiations with Hamas that led to an agreement. Israel confirmed the participation of Deputy Foreign Minister Tzachi Hanegbi in a meeting of donor countries (the Ad-Hoc Liaison Committee) taking place in New York at the end of the month on the reconstruction of Gaza. Hanegbi is expected to sit side by side with Palestinian Prime Minister Rami Hamdallah. Is there any need for further evidence of Israel's contacts with the Palestinian government shared by Fatah and Hamas?

And what does Netanyahu offer Abbas in return for abrogating the agreement with Hamas and cooperating with Israel in its struggle against the group? The prime minister promises to promote “diplomatic processes in a reliable and sober fashion, as [Israel has] been doing until now.” But until now, Netanyahu stubbornly refused to utter "1967" or to present the Palestinians with his map for a permanent arrangement. Until now, he has refused to touch the issue of Jerusalem with a 10-foot pole, much less address a just resolution for the refugee problem. Until now, Netanyahu agreed, and only under US pressure, that the document over which Secretary of State John Kerry labored for nine months include a US declaration (not an Israeli one) to the effect that a permanent arrangement will be based on the 1967 borders, with mutually agreed-on corrections. His agreement was conditioned on Israel being allowed to express its reservations on this point.

So, perhaps in mentioning “diplomatic processes” Netanyahu was referring to the fashionable declarations about replacing bilateral talks with the Palestinians with the regional initiative anchored in the March 2002 Arab Peace Intiative? A hint of this can be found in Netanyahu’s comments at the news conference regarding the “realignment of regional forces in the Middle East. … It contains within it new possibilities for our country.” But when asked about this, the prime minister evaded the question of why he didn't take advantage of these new opportunities to embrace the Saudi peace initiative. He gave the vague response, “I suggest waiting. We are examining all the possibilities. This examination is still in its initial stages.”

In seven months, the Arab initiative will celebrate its bar mitzvah, and Netanyahu is stuck in the “initial stages.” According to the strategic analysis he himself provided Aug. 27, there was no time more suitable for a courageous and comprehensive diplomatic move. Netanyahu said, “Many elements in the region understand today that in the struggle in which they are threatened, Israel is not an enemy but a partner.” Quite true. But all those “many elements in the region” also understand that there is no brave and comprehensive diplomatic move on the horizon without an agreement on the establishment of a Palestinian state based on the 1967 borders and a just, agreed-upon solution to the refugee problem.

Most worrying of all, the farthest horizon these principles can reach these days is the door to the meeting room of the Netanyahu-Liberman-Naftali Bennett government. Sharon can rest in peace. We Israelis must wake up.