The failure of the current talks with Hamas emphasize the urgent need for Israel to end its ''separation policy'' of isolating Gaza from the West Bank. 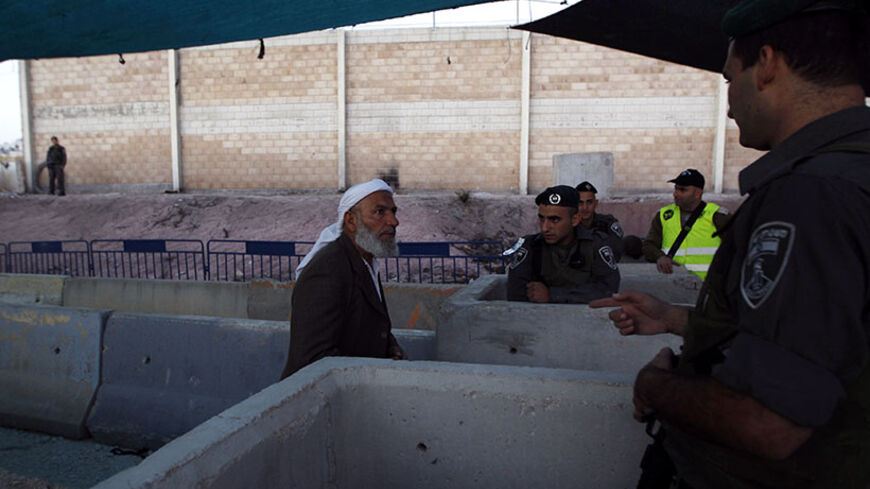 An Israeli border police officer speaks with a Palestinian man as he waits to cross into Jerusalem at the Qalandia checkpoint near Ramallah, July 4, 2014. - REUTERS/Mohamad Torokman

The most recent violation of the cease-fire between Israel and Hamas in Gaza casts doubt on the Egyptian effort to bring the sides to some sort of “resolution,” a euphemism for an “agreement.” The failure of the Egyptian initiative thus far stems, to a great extent if not solely, from the refusal of both sides to accept two strategic decisions.

Hamas and the organizations opposed to Fatah have avoided accepting rule by the Palestinian Authority (PA), led by President Mahmoud Abbas, and the reconciliation government over the Gaza Strip. They find it difficult to commit themselves to cooperation with the PA's security apparatus in the West Bank, adopt the practices of the security apparatus and obey the orders of its commanders. Meanwhile, the Israeli side persists in adhering to the illusion that its unilateral disengagement from Gaza effected a separation of the territory, with its 1.8 million residents, from the Palestinian problem and its solution.

Al-Monitor learned Aug. 20 that a few hours after talks in Cairo broke down, Palestinian delegation chief Azzam al-Ahmad said that Israel's insistence on demilitarizing Gaza was the reason behind the failure of the negotiations. The demand that Hamas relinquish its weapons might be a legitimate condition in the negotiations, but Israel must recognize that those who demand that the Palestinians honor the security clause of the Oslo Accord must for their part honor the clause in the same agreement, according to which the West Bank and Gaza are one political unit. In other words, Israel must unilaterally disengage from its so-called policy of separation, which was put in place under the Ehud Olmert government and whose failure has been proven during Benjamin Netanyahu’s tenure.

Foreign Minister Avigdor Liberman has drawn a connection between Hamas rule in Gaza and territorial continuity between the Gaza Strip and the West Bank. In a speech he gave in March 2012, Liberman said, “As long as Hamas governs the Gaza Strip, there is no chance that we would agree to a secure corridor, insecure corridor, above ground corridor, underground corridor, or any kind of corridor.” The foreign minister asserted then that the continuing fire from Gaza “buries any possibility that at one point there will be territorial continuity between Gaza and Judea and Samaria.” In his words, “The Palestinians decreed separation upon themselves, and right now it looks like it will last for generations.” Thus, if the agreement with Hamas were to transfer control of Gaza to the PA and establish a lasting cease-fire, Israel would not have cause to maintain the policy of siege and separation.

When Israel accepted the Oslo Accord and agreed to the creation of an independent Palestinian state, it gave up, in principle, its control over the territories that were meant to be transferred to the sovereignty of that state. In the same manner, Israel cannot close the sea and airports of Lebanon, for instance, even though they are used to import arms to Hezbollah. The opening of Palestinian seaports and airports is included in several interim agreements, including the 1998 Wye River Memorandum, which bear Netanyahu's signature. With the resolution of the permanent status of the occupied territories, Israel will not be able to close the sea and air passages to the Palestinian state. At most, it could demand that in the first years after the establishment of Palestine, an international security inspection mechanism be put in place in its seaports and airports, as well as in the border crossing between the West Bank and Gaza.

Until a permanent agreement is reached, and regardless of an arrangement with Hamas, Israel must re-examine the scope of its siege on Gaza and end the policy of separation. First, the separation has not yielded Israel diplomatic dividends. Reality proved those wrong who believed unilateral disengagement from Gaza would also disengage the territory from the West Bank, diminish the demographic problem and ease the way toward an arrangement. The establishment of the Palestinian reconciliation government proves that physical, communal and economic separation between the two parts of the Palestinian entity did not create a political separation between them. Corroboration of this can be seen in the cooperation between Fatah, Hamas and Islamic Jihad in the negotiations with Israel in Cairo today.

Second, the separation between Gaza and the West Bank did not improve Israel's security situation at all. The long-term security interest of Israel is not limited to the number of rockets or amount of cement that enters Gaza. The words of none other than Prime Minister Netanyahu testify to this. In July 2010 he said, “One way to increase stability is to continue with the policy we’ve implemented now for two years — to advance economic development and growth for the Palestinians. It’s good for them, it’s good for us. There’s a series of steps here that advance this goal.”

To this day, the steps Netanyahu spoke of have not included permission for Palestinian manufacturers and farmers in Gaza to market their products in the West Bank and Israel. Thus, exports from Gaza have declined by 85% since 2000, the eve of the outbreak of the second intifada. The ramifications for industry in the territory were immediate and devastating.

A report by Gisha, a human rights organization, asserts that at the end of 2011, the unemployment rate in Gaza was 30%, as opposed to 16% in the third quarter of 2000. The unemployment rate is especially high, at 46%, among young jobseekers between the ages of 15 and 29. The unemployment agencies for young educated people in Gaza constitute the most successful recruitment arms of terror groups and religious fundamentalists. Several Israeli and international economists, including Itzhak Gal, Ephraim Kleiman and experts from the World Bank, have determined that the prohibition on marketing goods to Israel and the West Bank is a key roadblock to sustainable economic development in Gaza.

In July 2011, Netanyahu was presented with a report from the Commission for the Arrangement, Supervision and Enforcement of the Employment of Palestinian Workers in Israel, headed by the deputy governor of the Bank of Israel, Zvi Eckstein. Representatives of the security system quoted in the report asserted that “as long as large parts of the Palestinian population are idle, the influence of extremist Islamic organizations … on Palestinian society has grown. The turn to extremist Islam which stems from high unemployment rates and poverty, increases the ability of various terror organizations to work from within the civilian population and increases the number of individuals available and willing to participate in hostile action.”

These words fell on deaf ears. “The separation of Gaza from Judea and Samaria is a most important concept from a security standpoint,” testified the coordinator of government activities in the territories, Maj. Gen. Eitan Dangot, to the Turkel Commitee that investigated the 2010 Turkish flotilla affair involving the Mavi Marmara. The major general added that this policy has “established and proven evidence.” In May 2012, Dangot was reported to have said in an internal security debate that the separation policy was meant to pressure the Hamas government in Gaza and to help the PA in the West Bank. Indeed, the economic pressure on the Hamas government in Gaza was one of the main factors that led the organization to subject itself to the rule of the PA government in Ramallah. This is the time to help the PA rehabilitate the communities in Gaza and earn the faith of its residents through an agreement establishing two states between the Mediterranean and the Jordan. An agreement, not an arrangement. Two states, not three.