Livni and Lapid should back Palestinian unity government

Against the backdrop of the Gaza war, Finance Minister Yair Lapid and Justice Minister Tzipi Livni must propose that Cabinet accept the Palestinian unity government and grant it responsibility for Gaza crossing points. 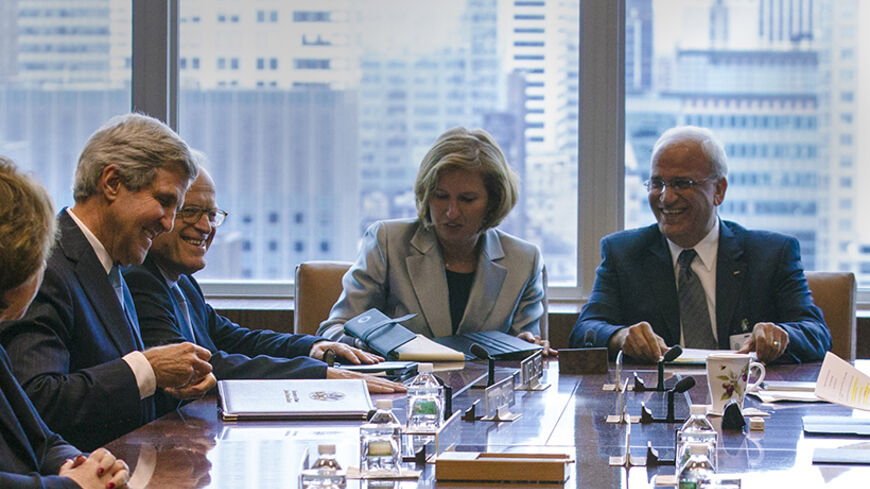 In the spring of 2011, just a day after Hamas and Fatah made one of their announcements that they would be establishing a National Unity government, a senior journalist wrote the following on his Facebook page: “Hamas and Fatah have announced a National Unity government. The right immediately lined up as ‘Against,’ while the left lined up ‘For,’ and both sides are shouting ‘I told you so!’ at each other.” The journalist wondered why no one dared say, “It happened just now. I still have no idea what it means. Ask me in two or three weeks, and maybe I’ll know more, because I’m trying not to respond on auto-pilot.” He signed the piece with the question: “Why aren’t we fed up already with being so predictable?”

The name of that journalist was Yair Lapid, and he is Minister of Finance and a member of the Security Cabinet. On June 2 of this year he raised his hand to vote in support of the Cabinet decision to suspend negotiations with the Palestinians over a permanent arrangement, and he did that just a few hours after the national reconciliation government between Hamas and Fatah was sworn into office. He joined the other ministers who authorized Prime Minister Benjamin Netanyahu to impose sanctions on the Palestinian Authority (PA) because, in the words of the Cabinet decision, it was, “responsible for all actions that harm the security of Israel which originate in Judea, Samaria and the Gaza Strip.” Lapid, the chairman of Yesh Atid, did not appeal the decision, even after it was discovered that the temporary Palestinian government did not include a single member of Hamas, and that its mandate was limited to rehabilitating the Gaza Strip and preparing for elections in the Occupied Territories.

Minister of Justice Tzipi Livni also voted in support of the decision. In 2011, when Livni was chairwoman of the Opposition, she responded to that attempt at Palestinian reconciliation by attacking Netanyahu for failing to make any progress in the diplomatic process. “Recruiting the world’s support does not just mean going from one country to the other to chastise the entire world, saying that the whole world is hypocritical and that there is terrorism,” she castigated Netanyahu. “The question is how to create the hope that Israel would be a genuine partner for frank negotiations to end the conflict. This prime minister is incapable of doing that.”

It was not enough for Livni simply to scold Netanyahu. Between the lines of what she said was a formula that she proposed at the time — and which is still feasible today — to diminish Hamas while leaving the reconciliation government intact. She said that every Palestinian government would have to accept the principles set by the Quartet, and said, “This is the only way to create hope and peace.” Then, as now, Palestinian Authority President Mahmoud Abbas declared that the unity government would meet the principles of the Quartet. It would recognize Israel, respect previous agreements, and abandon violence. Today, just as then, he emphasized that the diplomatic negotiations were not being conducted by the government but by the Palestinian Liberation Organization (PLO), which he heads. Abbas reiterated that he was committed to a two-state solution based on the 1967 borders, and to the Arab League’s peace initiative of 2002. At a meeting he held with the head of Hamas' Political Bureau, Khaled Meshaal, during the previous attempt at reconciliation (May 5), the president of the PA made it clear that he would not allow weapons to be brought into the West Bank.

The significant rapprochement between the two factions in 2011 continued with the Israeli assassination of a senior Hamas official and ended with a firefight and escalating tensions in the south. Then, as now, the attempt at Palestinian reconciliation resulted in a military clash in the Gaza Strip between Israel and Hamas.

Things would have looked different if, instead of responding “Amen” to Netanyahu and Ministers Avigdor Liberman and Naftali Bennett, both Livni and Lapid would have firmly demanded that the government of Israel recognize the Palestinian reconciliation government. Instead of presenting the reconciliation agreement as an act of surrender to Hamas, they should have presented it as a strategic achievement for the Israeli and Palestinian peace camps. Lapid and most of the 18 members of his Knesset faction, together with Livni and the five members of her HaTenua faction, are the very pressure group that President Barack Obama apparently referred to when he told Thomas Friedman of The New York Times that if Netanyahu “doesn’t feel some internal pressure, then it’s hard to see him being able to make some very difficult compromises.” The public that gave its trust to Lapid and Livni could have expected them to play the role of the responsible adults when Netanyahu and his colleagues on the right turned Abbas into a collaborator with terrorists. After all, this was the same Mahmoud Abbas who publicly condemned the kidnapping and murder of the two Israeli boys and the Israeli youngster, while in the heart of an Arab capital.

It’s not too late to right the wrong. Lapid and Livni should bring a proposal to the Cabinet that would simultaneously end the fighting in Gaza, shrink Hamas, boost Mahmoud Abbas as the one person who can mend the Gaza Strip and rescue the diplomatic process. All they would have to do is to remove the words, “that harm the security of Israel,” from the Cabinet decision of June 2, which states that the Palestinian reconciliation government is, “responsible for all actions that harm the security of Israel which originate in Judea, Samaria and the Gaza Strip.” Is it possible that the PA could be deemed responsible for the security of the State of Israel, but unable to shoulder the responsibility for security at border crossings, a seaport and an airport?

Is the whole idea delusional? Not to anyone who has bothered to read the 2005 Border Crossing Agreement between Israel and the PA. That agreement, which was signed under the auspices of the United States, states that the parties agree to a protocol regarding the establishment and operation of the international airport in the Gaza Strip in the interim period. Similarly, they made a commitment to act “without delay” to reach an agreement that would enable the construction and operation of a seaport, in accordance with previous agreements (meaning the Wye Accords that Netanyahu and late PLO leader Yasser Arafat signed in 1998). The agreement states that the parties recognize the importance of Gaza’s port to the development of the Palestinian economy and expanding Palestinian trade. Furthermore, the agreement states that the two parties will immediately renew their negotiations over safe transit between Gaza and the West Bank. The same agreement also determined that the border crossings would operate continuously and be defined as international border crossings. The Rafah border crossing would be operated by the PA and Egypt, with a third party to ensure that the PA fulfills its obligations.

So as not to be suspected of being what Lapid calls one of “those people on the left who automatically support a Palestinian reconciliation government,” I have decided to back my case with the professional opinion of some 40 diplomats and experts from Israel and the international community, who gathered in Jerusalem on July 24 at the initiative of MITVIM, The Israeli Institute for Regional Foreign Policies, and the International Crisis Group, to discuss ways to resolve the crisis.

“Israel’s demand that Abbas renounce the reconciliation agreement between Fatah and Hamas and its decision to freeze its negotiations with the PA until this demand is fulfilled, have proved to be a mistake,” wrote the experts. “Palestinian unification can actually be an asset to Israel. It can serve as a means of containing Hamas, constraining its power, and creating more favorable conditions towards a two-state solution.” In summary, they wrote, “A unified Palestinian leadership is a precondition for the possibility of implementing any permanent arrangement to resolve the Palestinian-Israeli issue, and Israel should, therefore, encourage it.” We can only hope that this will be brought to the attention of ministers Livni and Lapid.