Five years ago, Tzipi Livni criticized Ehud Barak for being part of a diplomatically stagnating right-wing government but she, too, will soon have to choose: negotiations with a Palestinian unity government, or diplomatic stagnation that will lead to a binational state. 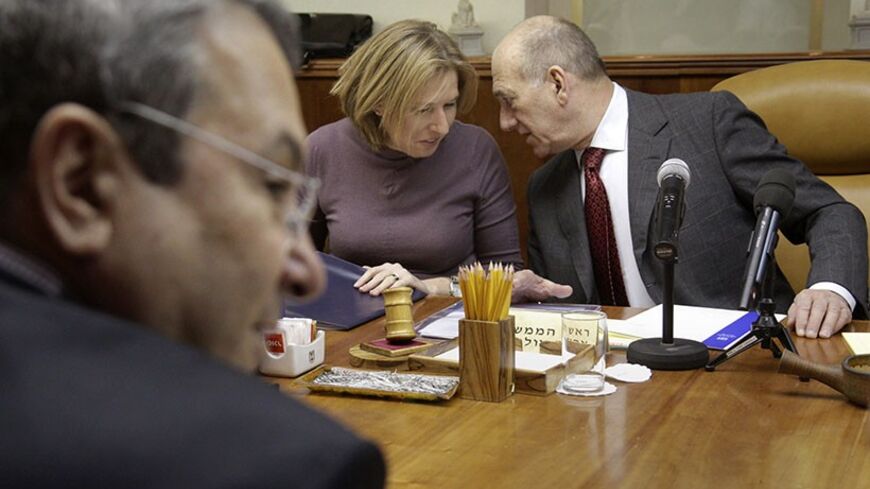 “Nothing can explain his staying in the government except his personal desire to be defense minister. He gives a stamp of approval to the wrong things, things that were never connected to the Labor Party,” said opposition chairwoman and Knesset member Tzipi Livni about former Prime Minister Ehud Barak in an interview on May 22, 2009, to then journalist Yair Lapid on Channel 2 after the formation of Netanyahu’s government.

“So long as I am in the government, the dangerous ideas will not be carried out,” Justice Minister Livni said about Economy and Trade Minister Naftali Bennett in an interview with Channel 2 on May 23 in the midst of a crisis in the diplomatic negotiations with the Palestinians.

Five years, almost to the day, passed between the two interviews. But in 2009 it was Barak who justified his party’s decision to join the government, exactly like Livni today, with the explanation that so long as they are in the government, the right is not. In May 2014, Livni’s detractors are the ones who can say, in the same coarse language she had used to castigate Barak, that the only reason for her to remain in the government is her personal desire to serve as justice minister; what she said about Barak could be said about her. One can also say about Livni that there is a basis to argue that she “puts the stamp of approval on the wrong things,” things that were never connected to the Hatnua Party that she heads.

In May 2009, Livni argued to interviewer Lapid, “The Arab world is against Hamas and the only thing that Prime Minister Netanyahu wants is to get home in one piece, but without peace.” In May 2014, Finance Minister Lapid extricated Livni from Netanyahu who wanted to fire her in retaliation for a meeting she held with Palestinian President Mahmoud Abbas.This time it was Livni who got home in one piece, but without the peace. Netanyahu made it clear to her that the next time she dares to talk to the neighbors, she will come home without the official ministerial car. Netanyahu’s close aide, Minister of Strategic Affairs Yuval Steinitz, made an overt threat on May 24 that if Livni continues to meet with Abbas, “she won’t be able to serve as a minister in the government.”

In May 2009, Livni led the Kadima Party and, at the time, she had 28 mandates at her disposal. One more than the Likud Party. The proposal was brought before her to serve as foreign minister and manage the negotiations with the Palestinians, even to switch the prime minister in the last third of the term of office. Livni rejected the generous offer, by arguing that “Netanyahu is stuck in the right of the once upon a time.”

In an interview with Israeli daily Ma’ariv in September 2012, Knesset member Tzachi Hanegbi — who at the time conducted negotiations with the Likud on behalf of Kadima, and has since returned to the Likud — said that Livni “does not really believe that in a government with 61 right-wing Knesset members, she will have a substantive influence on policy. From her talks with Netanyahu … she got the impression that he was not ready for any kind of change.”

In May 2014, Livni heads a tiny faction of only six Knesset members, the smallest faction in the most right-wing government that has ever ruled in Israel. In the recent Channel 2 interview, Livni said, “I am working to prevent the Bennetts from leading us irresponsibly in the direction of a binational state. … Bennett really wants me to leave [the government] — on that day, all of his dangerous bills will become real.”

But what about the far right-wing ministers and Knesset members? The Ya’alons? The Libermans? The Danons? The Elkins? The Levins? Where is Defense Minister Moshe “Bogie” Ya’alon leading the state, the one claiming that mere negotiations on the two-state solution encourages terrorist acts against Jews? Does Livni have the power to prevent Foreign Minister Avigdor Liberman from declaring that the stipulation for a two-state solution is the revoking of citizenship from Israeli citizens on the basis of ethnic-national affiliation? And is Netanyahu himself less of a right-winger than five years ago?

And not just Livni: by saving the minister of (frozen) negotiations from being removed from her position, Lapid presented, allegedly, another enlightened facet of the right-wing government. It turns out that Lapid also does not want to remain alone in the coalition as representative of the “sane camp.” He also has an interest in Livni continuing her fig leaf role in Netanyahu’s government. According to newspaper reports, Lapid threatened Netanyahu that if the latter would fire Livni, then he would have to give the Yesh Atid ministers their walking papers, too. The threat had its desired effect. Livni remains in the government under caution, and Lapid gained a few points from the left at her expense. And all that for some kind of a half-meeting with a Palestinian leader whose name graces the Oslo Accord.

To those who criticized her meeting with Abbas, Livni responded, “I believe in talking” — she wanted to hear from Abbas about things that happened during the negotiations. She even took advantage of the opportunity to spell out to Abbas her opinion regarding the agreement between Fatah and Hamas.

It's unclear how belief “in talking” can go hand in hand with Livni’s vote in the Cabinet, at the end of April, on behalf of a resolution determining that “the State of Israel will not conduct negotiations with a Palestinian government backed up by Hamas.” If she really believes that this is the right decision, the swearing-in of the Palestinian unity government will be the swan’s song of that which is dear to her — the two-state solution.

Soon, Livni will be forced to choose between negotiations with a Palestinian unity government for promoting the two-state solution, or diplomatic stagnation that will lead, in her own words, to the catastrophe of a binational state or apartheid. It will be interesting to see if Lapid will take her side should Livni choose the first path, and if they both leave Netanyahu in the hands of Bennett and Ya’alon.