Israeli Prime Minister Benjamin Netanyahu wants to reduce international pressure during the last 18 months of US President Barack Obama's term and will begin a diplomatic initiative to that end this autumn. 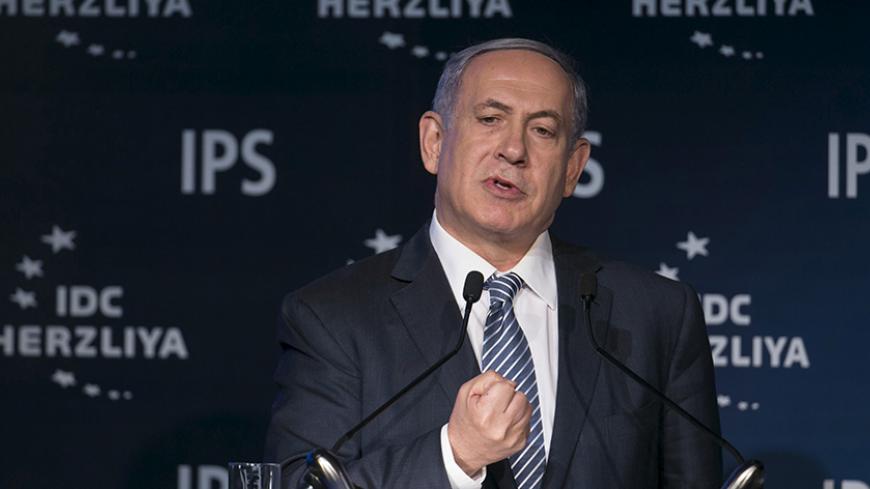 Israeli Prime Minister Benjamin Netanyahu’s speech at the Herzliya diplomatic gathering on July 9 was a first, cautious trial balloon of sorts for what political sources in Israel call his “autumn restart.” By this they mean a new diplomatic initiative that Netanyahu will launch as soon as the Iranian issue is no longer on the agenda by the end of June, assuming that a nuclear agreement is reached.

Ultimately, the goal of this initiative is the renewal of diplomatic negotiations with the Palestinians. This would be achieved by adding Isaac Herzog’s Zionist Camp to Netanyahu’s coalition, rebooting relations with the United States, reducing the growing tensions between Israel and the international community — particularly with Europe — and hindering the campaign of delegitimization and boycotts being waged against Israel. All that remains to be seen is whether Netanyahu will eventually accept and implement the plan, or whether the chaotic, unforeseeable events of the Middle East will impede it.

Where this week's speech succeeded was in bringing diplomatic negotiations back to the center stage. During his re-election campaign, Netanyahu may have said that there would be no Palestinian state on his watch, but now the issue is back on the agenda, and in a big way. Unlike in his previous speeches, the need to renew negotiations without any preconditions and return to a two-state solution that includes a Palestinian state that recognizes Israel as a Jewish state once again figures prominently in the prime minister’s speeches, second only to the Iranian threat. Because of the current fixation in Israel on crime and political scandals, Netanyahu’s speech managed to slip under the Israeli media’s radar. Nevertheless, his message got through.

Political and diplomatic forces in Israel are already working out the details of this new initiative in an informal capacity. The idea is to freeze Israeli construction outside of the major settlement blocs, to deliver a conciliatory speech on diplomatic affairs that relates positively to the 2002 Arab Peace Initiative (with the necessary reservations) and add an alluring bundle of on-the-ground Israeli concessions to the Palestinians. At the same time, Israel will continue to encourage what it calls a stabilization package for Gaza that includes further easing of the blockade and the flow of reconstruction and aid materials into Gaza to help Hamas overcome the Salafist opposition and support it as the sole government in the Gaza Strip.

This particular issue may have been subject to discretion at one point, but it is now public knowledge and has been for quite a while. Israeli officials speak openly about how Israel and Hamas are collaborating, how these two bitter enemies now share the same interests and how Netanyahu, who long ago announced that he plans to topple the Hamas government, is now doing everything he can to help it survive. The Middle East really is a remarkable place.

Despite all this, there is no call for euphoria. Netanyahu hasn’t changed his stripes. He has no intention of signing an agreement with the Palestinians or engaging in any other historic act. He simply wants to maintain the status quo. He will say, “Yes, but …” to the Saudi initiative, and then spend two years trying to redefine the agreement. He will demand that all references to Syria be removed from any agreement, because Syria has effectively ceased to exist and there is no way in the world that Israel would agree to hand over the Golan Heights to a group of rebels. He will ask what is meant by the "refugees issue" and try to clarify whether it is a matter of "all or nothing” or open to negotiations. And he will demand that the Arab world grant Israel at least some of the compensations included in the initiative while negotiations are still underway, rather than waiting until they are concluded.

It should not be forgotten that Netanyahu spent six years milking his 2009 Bar Ilan speech for all it was worth, even though nothing actually came of it. A second speech focusing on the Arab Peace Initiative will buy him even more time, and he doesn’t need much. In fact, all he needs is about 18 months. That’s because Netanyahu’s real task at this stage is to survive Barack Obama’s presidency. But that will not be easy, and anything that can help him will be put to use. It doesn’t matter if it’s Herzog, the Arab League or a partial freeze on settlement activity. All that matters is outlasting the Democratic president in Washington so despised in Jerusalem.

There were indications of this intent in the speech by Netanyahu’s Defense Minister Moshe Ya’alon at the same Herzliya gathering. Ya’alon, Netanyahu’s defense mentor, says publicly what Netanyahu says behind closed doors. Ya’alon has long played the role of the “bad boy,” and once again, he did not disappoint. “The most stable thing in the Middle East is instability,” he said. Then he continued, “I see no chance of a stable peace being reached between Israel and the Palestinians in my lifetime, and I plan to live a little longer.”

Ya’alon's words set off a public debate on Twitter. Former Ambassador Martin Indyk, who oversaw negotiations between the Netanyahu government and the Palestinian Authority during Netanyahu’s previous term, tweeted that he was surprised that Ya’alon claimed in his speech that Israel offered the Palestinians the Clinton Parameters in last year’s negotiations. Perhaps, Indyk added, Ya’alon forgot that the Clinton Plan include Palestinian sovereignty over the Temple Mount. No, Indyk finally stated, Israel did not offer the Palestinians sovereignty over the Temple Mount during last year’s negotiations. In one of the Twitter chats that ensued, Indyk was asked if he is calling Ya’alon a liar, but he would not answer. Apparently, it is all a matter of interpretation.

One way or another, contacts and preparations for October continue apace. The “autumn restart” should come before the vote on the state budget, expected to take place in November. Netanyahu is worried that he could lose his fragile Knesset majority, especially given the latest political/criminal scandal surrounding Knesset member Oren Hazan, who, according to a Channel 2 investigative report, was allegedly involved in soliciting prostitutes for clients, used drugs and was engaged in other questionable behavior while managing a Bulgarian casino.

Netanyahu has been very careful not to offend Hazan, who has been condemned across the political spectrum, because unlike everyone else, Netanyahu depends on Hazan’s vote. As far as Netanyahu is concerned, the current situation is intolerable. Finance Minister Moshe Kahlon is working intensely to expand the coalition by applying personal pressure on Herzog and Yesh Atid head Yair Lapid. He is offering them a shift in the diplomatic direction being taken by the prime minister in exchange for joining the coalition, including another foundational speech on policy. And there would be a very attractive bundle of ministries, too.

Neither Herzog nor Lapid are cooperating — for now. The real question is how long Herzog will be able to keep saying no. We'll find out this fall.