If Prime Minister Benjamin Netanyahu is genuinely interested in promoting a new diplomatic peace initiative, he must demonstrate his willingness with actions, such as releasing Palestinian prisoners and working to bolster the Palestinian Authority rather than Hamas. 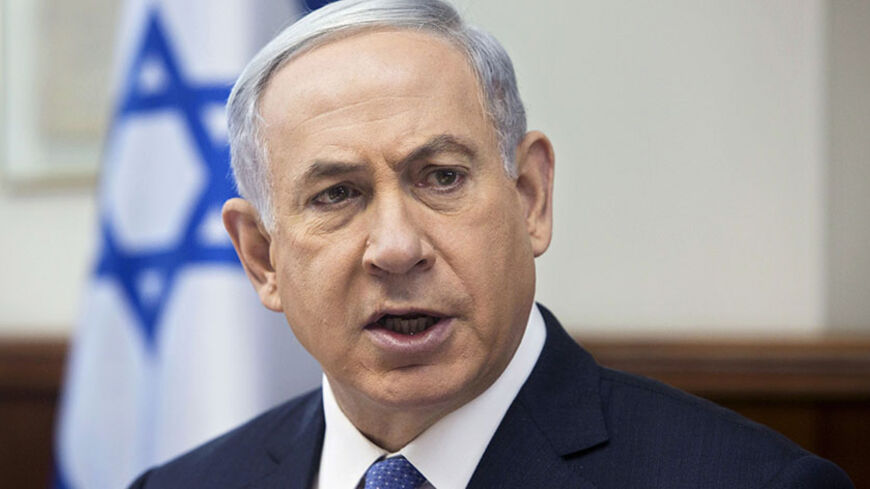 Among the thousands of lines written in recent days about the cultural clash between Israeli artists and Culture and Sports Minister Miri Regev and the exploits of Knesset member Oren Hazan, astute readers managed to find a few words about the Israeli-Palestinian conflict. My colleague Ben Caspit wrote for Al-Monitor June 10 that the need to renew negotiations and return to the two-state solution is once again getting significant mileage in the speeches of Prime Minister Benjamin Netanyahu. He assessed that the speech Netanyahu delivered at the Herzliya diplomatic gathering was “a first, cautious trial balloon of sorts for what political sources in Israel call his ‘autumn restart.’” Caspit was referring specifically to a diplomatic initiative that Netanyahu will set in motion as soon as the Iranian issue is off the table at the end of June (if an agreement is indeed reached between Iran and the five permanent members of the UN Security Council plus Germany).

Caspit listed the aims of the initiative one by one: getting Isaac Herzog’s Zionist Camp into Netanyahu's coalition; rehabilitating the relationship with the United States; easing the growing tensions between Israel and Europe and the international community; and hampering the boycotts and delegitimization campaign being conducted against Israel in recent months. Indeed, these goals individually and collectively serve the interests of the State of Israel. Nonetheless, this important list is lacking.

What happened to such goals as ending the occupation, ending the conflict with the Palestinians and preserving Israel’s character as a Jewish and democratic state? This is even before asking Defense Minister Moshe Ya’alon for his views on the initiative. Hint: On June 9, Ya’alon said he does not believe a stable agreement with the Palestinians will be reached in his lifetime. To allay any concern about his health, the defense minister stated, “I intend to live a bit longer.” In addition, how does Netanyahu plan to enlist the support of most members of his Likud faction for the new version of the two-state solution, not to mention that of his partners on the more radical right? After all, Knesset member Benny Begin resigned from the government in 1997 to protest the Hebron protocol for the partial redeployment of the Israel Defense Forces from Hebron, and Deputy Foreign Minister Tzipi Hotovely, speaking before Foreign Ministry employees May 21, said that God had given all of the Land of Israel to the people of Israel, and only to the people of Israel.

In light of Netanyahu’s dubious conduct in regard to the territory at the heart of the conflict with the Palestinians, his talk of new diplomatic initiatives goes in one ear and out the other of the Palestinians, his supposed negotiating partners. Given his contradictory statements about a solution to the conflict, it is up to the prime minister to prove the seriousness of his intentions. To convince his fellow lawmakers in the Zionist Camp to join the government, Herzog will need more than a hollow trial balloon from Netanyahu. To stop the wave of boycotts, the prime minister will have to put his money where his mouth is.

It is customary for building contractors to obtain a “good faith” deposit from prospective homebuyers as proof of their serious intention to purchase a property. Over the past year, Netanyahu has displayed great interest in forging a regional peace arrangement. For example, at a ceremony May 8 marking the 70th anniversary of the victory over Nazi Germany, Netanyahu said that the mutual interests of Israel and the Arab states vis-a-vis Iran are providing opportunities to promote alliances and “perhaps even to advance peace.” Last week, former Prime Minister Ehud Barak spoke at the Herzliya conference about that same mutual interest, “at the heart of which is the fight against radical Islamic terrorism and the struggle against Iran’s hegemonic intentions and nuclear programs.” Barak called it “an opportunity of the kind that comes along once in a generation.”

Barak often meets with senior statesmen around the world. He knows that their trust in Netanyahu has reached rock bottom. To convince them that talk about regional peace is not just a marketing gimmick, Barak suggests that Netanyahu offers a good faith deposit in the form of serious negotiations with the Palestinians and with a group of pragmatic Arab states. He believes that negotiations on a solution with the Palestinians based on the principle of two states for two people, along with a comprehensive regional arrangement, must be conducted within the framework of an international conference backed by the United States and the Quartet (the European Union, Russia, United Nations and United States). What’s more, the one-time military chief of staff and minister of defense suggests giving serious thought to adopting the 2002 Saudi-sponsored Arab Peace Initiative “complete with Israel’s reservations.”

While prime minister, Barak opposed interim arrangements with the Palestinians, such as freezing construction in the West Bank, continued withdrawal as stipulated in the 1998 Wye River Plantation agreement and implementation of his commitment to transfer three Jerusalem-area villages (Abu Dis, al-Azariya and eastern Swahara) to full Palestinian control. Now he is pleading with the Israeli government to limit new construction to the settlement blocs and stop building in all other areas. He is convinced this would completely alter Israel’s international standing. In other words, what one sees from outside the prime minister's office is different from the view of the occupants inside.

The good faith fee must be paid in hard currency, such as releasing hundreds of Palestinian prisoners, that is, members of Fatah. This would strengthen the status of the Palestinian Authority (PA). Talk about regional peace initiatives based on mutual interest with the pragmatic Arab states is incompatible with contacts between Israel and Hamas about a cease-fire in exchange for lifting the blockade of the Gaza Strip. Such talks could actually strengthen Hamas, which categorically opposes any diplomatic arrangement with Israel. If Israel is genuinely interested in a settlement with the Palestinians, it must deposit this good faith fee in the hands of the Palestinian leadership. In no way should Israel act to strengthen the status of the PA's nemesis, Hamas.