US says it's 'game over' for Israeli-Palestinian negotiations

According to a senior Obama administration official, Israeli-Palestinian negotiations are definitely over for the next 14 months, leaving the two parties to contemplate a binational state and war. 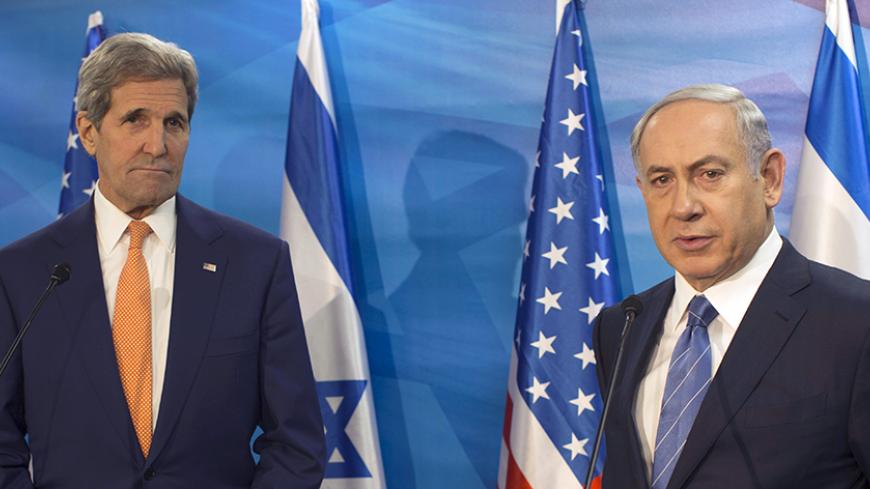 Israeli Prime Minister Benjamin Netanyahu (R) and US Secretary of State John Kerry brief the media before their meeting at the prime minister's office in Jerusalem, Nov. 24, 2015. - REUTERS/Atef Safadi

This year’s annual Saban Forum in Washington evolved into a long match of diplomatic ping-pong. The opening serve was delivered Dec. 4 by Israeli Defense Minister Moshe Ya’alon. The ball was returned to the Israelis the next day by US Secretary of State John Kerry. On Dec. 6, Prime Minister Benjamin Netanyahu decided to join in, appearing via video to deliver the last word and final shot. This put the ball back in the American court, but at the last minute, presidential candidate Hillary Clinton made an appearance to get in what was ultimately the final word.

Match point, however, was played by top American and Israeli officials behind the scenes, who said that at least on the diplomatic front, nothing new is expected between Israelis and Palestinians for the next 14 months. In other words, to borrow a favorite quote of former Israeli Foreign Minister Avigdor Liberman, “We’re not being threatened by anything good.”

“It’s over,” said one senior American official, who had participated in Israeli-Palestinian negotiations during the past few years and spoke on condition of anonymity. “The game is over, and all that is left for the American side to do is to hold a mirror up before the two parties. That way they can see what a huge chance they missed out on and the enormity of the risk that is currently facing them.”

It's becoming clear now that contrary to various media reports and insinuations from the prime minister’s office, Netanyahu’s visit to Washington in November and the lengthy talk he had with President Barack Obama were hardly the huge success they were made out to be. Al-Monitor has since learned that Obama was originally supposed to address the Saban Forum this year, but decided against it because he had nothing new of importance to share. Furthermore, he had been disappointed by the meager, if not demeaning, bundle of gestures that Netanyahu had offered to make to the Palestinians. Obama therefore decided against making an appearance.

Meanwhile, Netanyahu was not originally scheduled to address the gathering but decided to send a video message at the last minute, recording it in the morning of the day it was screened at the forum. He did so for two reasons. First, Netanyahu wanted to rectify the negative impression left by Ya’alon two days earlier at the opening of the forum. Second, he also wanted to respond to Kerry, who the evening before had cautioned that if Israel failed to move toward a two-state solution, it would find itself inextricably bound to the reality of a single, binational state, which would lead to a devastating war. Netanyahu delivered these two messages with the utmost precision, as he is prone to do.

Based on conversations with senior Israeli and American officials over the past few days, the following is what appeared to have happened: The Obama administration completed the traditional US role regarding everything involving negotiations between Israel and the Palestinians. The game is now over. The administration had originally planned to make a last ditch effort and devote Obama’s final year in office to relaunching talks and rebuilding the shattered trust between the parties. The effort was supposed to have begun with a series of meaningful Israeli gestures toward the Palestinians, culminating in granting construction permits for Palestinians in Area C of the West Bank, currently under Israeli civil and security control. Netanyahu hesitated, however, sputtering about in reluctance. While he sputtered, Education Minister Naftali Bennett made it abundantly clear that if Netanyahu agreed to such a move, the governing coalition would fall apart within minutes.

In a closed-door forum before activists from his party, HaBayit HaYehudi, Bennett boasted, “I put a bullet between [Netanyahu’s] eyes,” upon hearing that such a move was even being contemplated. Bennett’s sharp statement was immediately leaked to the media, causing an uproar and even inducing an apology. Nevertheless, the essence of what he had said won the day. Netanyahu was quick to realize that his current coalition could not sustain such a move, and he decided to forgo it.

No one in the political arena was surprised by the decision except perhaps Kerry, who has a reputation for being the eternal optimist. He showed up for his final visit to Jerusalem and Ramallah on Nov. 24 only to realize that the starter button was jammed. It was a waste of energy and effort. Netanyahu is mired too deeply in the right, while Palestinian President Mahmoud Abbas has long since lost his legitimacy and is no longer able to make tough decisions. In other words, the game is over.

For posterity's sake, Kerry delivered his chilling, Dec. 5 speech. Ya’alon, who once called Kerry “messianic and obsessive,” had a front row seat for the show at Washington's Willard Hotel. During the speech, Kerry asked a series of tough questions that made him sound more like the Prophet Jeremiah during one of his darkest soliloquies.

The preceding evening, Ya’alon had provided yet another show of tactlessness and cringe-worthy candor when he went on the record criticizing the Americans’ leadership in the Middle East. In his own words, “The US needs to get off the fence and lead the world,” in reference to everything pertaining to the fight against the Islamic State and other Islamic extremists. Kerry responded by looking Ya’alon straight in the eye and saying, “Yes, we do have a strategy.” He then proceeded to lay it out in detail.

Later, both Kerry and Ya’alon brushed the dust of the battlefield off their suits and met for a lengthy working session in one of the hotel’s conference rooms. The next day brought Netanyahu's speech, followed by Clinton's address. In about a year from now, the two of them will still be around, trying to collect the pieces of whatever exists of Israel’s relationship with the Palestinians, should Clinton win the US election and if Netanyahu can survive the constant upheavals of Israeli politics. For now, at least, the chances are greater than 50% that the two of them will succeed. They both know and mutually loathe each other, so much so in fact that Netanyahu may find himself longing for Obama, and Clinton will continue to miss the late Prime Minister Yitzhak Rabin.