Secretary of State John Kerry employs all the US expertise to first resolve the security problem between Israelis and Palestinians, hoping that such a compromise will allow discussion of the core issues. 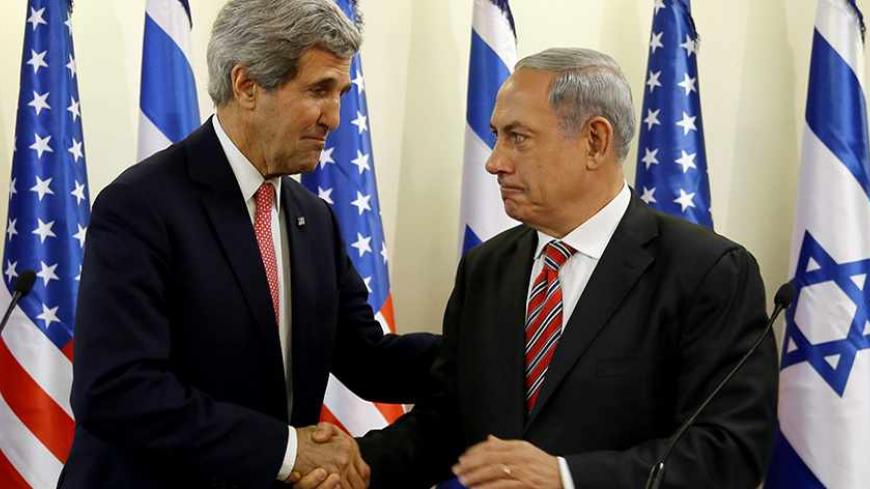 WASHINGTON — Israeli President Shimon Peres once said that peace could be likened to a horse galloping under a window. A true leader is one who has the courage to jump out the window and hop on the horse’s back and gallop with it. This is a one-time, one-off chance, Peres said. If you hop on history’s back, you get to ride with it. If you stay in the room, you are left behind.

At some point over the next few months, Israeli Prime Minister Benjamin Netanyahu and Palestinian Authority Chairman Mahmoud Abbas (Abu Mazen) will have to decide whether they are going to jump out the window and hop on the back of the galloping horse or whether they will remain alone in the room. The horse that will swiftly gallop under their window has a name: John Kerry. The US secretary of state's speech on Dec. 7 at the Saban Forum made it clear — for those who have yet to understand — that he is the driving force behind the current and intense round of talks in the Israeli-Palestinian peace process. Although Kerry’s speech followed the interview by American-Israeli billionaire Haim Saban with US President Barack Obama, and although the latter was armed with his usual engaging charm, it was Kerry, to my mind, who stole the thunder.

Passionate, persuasive, exuding power and conviction, he talked like an evangelist speaking to his flock about redemption. It was not a speech, it was a sermon. He reminded Israelis in the auditorium of Peres’ heyday, with his “new Middle East,” which ultimately went up in smoke in the wake of terrorist attacks, intifadas and revolutions.

After Kerry’s speech, it was already evident that this whole thing — the negotiations between Israelis and Palestinians — is here to stay. Kerry has no intention of folding or despairing. Demonstrating relentless energy, extraordinary resolve and inspiring creativity, he seems at the present time to be the only one who takes the Israeli-Palestinian issue, the ongoing Israeli occupation and the campaign to delegitimize Israel the hardest. Of all people, it is none other than he — the US secretary of state.

Gen. John Allen, who was tasked by Obama with drawing up the “security appendix” to a future agreement, was among the attendees. Allen, who was the commander of US forces in Afghanistan, toiled for many months. Kerry related that some 160 people worked with him — from the CIA and other intelligence agencies, the Pentagon, the State Department, US Army, Marine Corps, Navy, Air Force, as well as external experts. All the power that the United States can muster has been assigned to carry out one simple, and quite frankly an ingenious mission: To solve Israel’s security problems in a future arrangement with the Palestinians. Or, if I were to put it differently, to take away Prime Minister Benjamin Netanyahu’s never-ending, ultimate and immortal excuse: to wit, security.

The Americans, Kerry related, addressed all scenarios, potential problems and possibilities, analyzing all security aspects if Israel had to withdraw from most of the West Bank area. They prepared solution models based on American guarantees, state-of-the-art warning mechanisms, regional levers as well as joint international ventures.

Now the Americans plan to present their solution to the Israelis in hopes of persuading Israel’s defense establishment, headed by Defense Minister Moshe "Bogie" Ya'alon and Chief of Staff Lt. Gen. Benny Gantz. The Americans are hopeful that this will pull Netanyahu into discussing the territorial issue. With the security problem out of the way, let’s talk about the territories.

It's believed that Kerry has decided to invest all his capital, time and energy in the Palestinian issue following explicit (perhaps even written) guarantees and promises that Obama received from Netanyahu. These guarantees were supposed to reassure the Americans that Netanyahu would not sell them down the river and that he really agreed to the establishment of a sustainable Palestinian state, provided Israel’s security were not compromised. Now that the US security model is ready, the ball is in Israel’s court. It is Netanyahu’s turn to make the next move.

Kerry set up an experienced team that navigated with him between the sides in the Middle East. The most recent person to join the team is David Makovsky, who knows Israelis and Palestinians inside out. (Fluent in Hebrew, the Jewish Makovsky was once a commentator for The Jerusalem Post.) Scheduled to arrive in Israel immediately after the Saban Forum, he would spend the next two weeks meeting with decision-makers from both sides.

It is believed that the “US bridging proposal,” the one we have been reporting about for many weeks, is starting to take shape. The Americans emphasize that they have no intention of imposing an arrangement on either side. If this is not their own arrangement, one which they want and support, fat chance that they will buy it, a senior US official has said.

So what’s next? The Americans intend to bring the sides as close as possible to each other on all core issues. It is at that point that they will lay out their bridging proposals specific to each area. If, for example, Netanyahu wants to annex and hold on to 15% of the West Bank, whereas Abu Mazen agrees to only a 2% land swap, the Americans will work something out to get both sides to a middle ground.

Those who know Netanyahu and his cronies as well as Abu Mazen and his cronies know the chances that these guys will reach a compromise are close to zero. But Kerry plans to push as hard as he can, as witnessed by everyone (including myself) who attended the recent Saban Forum. Having delved into the crux of the issues, he knows both sides thoroughly. Enjoying unqualified support from the president, he has a lot of power. This is going to be interesting.