Bennett a divider, not a uniter

Economy and Trade Minister Naftali Bennett’s speech at the Saban Forum indicates that in the upcoming elections, a vote for the right means perpetuating the rule of an ethnocentric camp determined to enclose Israel in a mental ghetto. 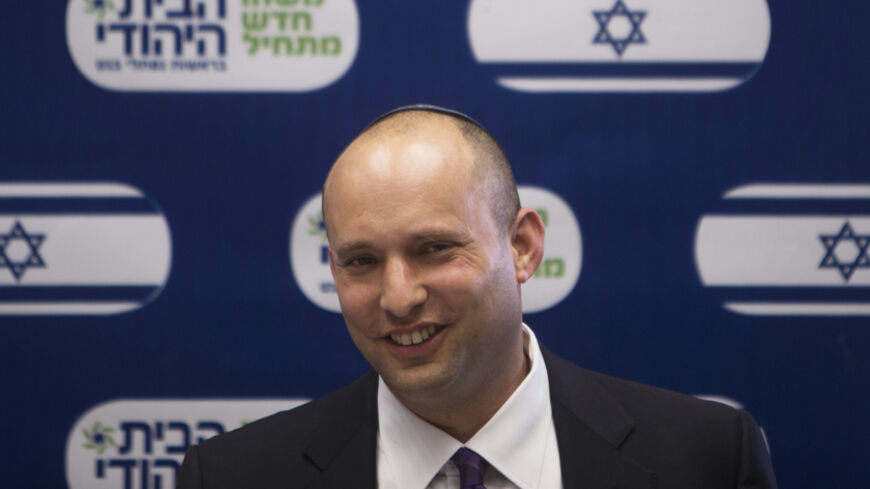 On Dec. 8 Al-Monitor quoted a promise by Hillary Rodham Clinton, former US secretary of state and potential presidential candidate: “The US government will continue its support of Israel regardless of which party wins the elections.” Clinton didn’t have to wait long to get a taste of the kind of leadership Israel could get on March 17, 2015. In the audience when she made her remarks at the Saban Forum in Washington sat Israeli Minister of Economy and Trade Naftali Bennett. In a speech delivered from the same stage, Bennett didn’t try to hide the essence of the leadership he is offering Israel.

Bennett spoke against the two-state solution — the formula Clinton argued was an “important and essential concept” in all that relates to ending the occupation and the Israeli-Palestinian conflict. “One cannot be an occupier in a country that belongs to you,” said Bennett. He stood behind his plan to annex Area C, lands constituting 60% of the West Bank that have remained under Israeli control since the signing of the Oslo Accords.

Bennett revealed that he and Prime Minister Benjamin Netanyahu had agreed not to attack each other during the election campaign, which suggests that the Likud Party will not be criticizing the idea of annexation. After all, Defense Minister Moshe Ya’alon, a member of Likud, said things no less rude about Secretary of State John Kerry, who dared to promote the two-state solution. Foreign Minister Avigdor Liberman, until recently a partner in the ruling party's Knesset faction, never misses an opportunity to present Palestinian President Mahmoud Abbas — who is clinging to the two-state solution with his remaining strength — as conducting “diplomatic terror.” Then there are the legislative initiatives of the chairwoman of the Knesset’s Committee for Internal Affairs, Miri Regev of the Likud, to annex the Jordan Valley, in addition to the settlement boom in the West Bank and East Jerusalem.

On March 17, the fog will lift from the ballot boxes across Israel and all that relates to the key issue that Israeli society faces — relations with its neighbors and permanent borders. We will no longer hear the tiresome theories that appear every election campaign — only the right can make peace, and only the left can make war. In its last term, the right, with help from the centrist parties, made war and drove away peace. Netanyahu’s campaign slogan for the 1996 elections, “Making a Secure Peace,” has been cast into the garbage bin at Metzudat Ze’ev (Likud headquarters). Almost 20 years have passed, and he hasn't seen fit to fulfill his promise of a secure peace.

Instead of the 2009 Bar-Ilan speech, in which Netanyahu promised two states for two peoples, what the public is now getting from him is the promise of one state, the State of Israel, for one people, the Jewish people. Reuven Rivlin, the last real democrat in the Likud faction in the current Knesset, has found sanctuary in the president’s residence. In the upcoming election, the public will know that a vote for the right wing means the perpetuation of an ethnocentric camp that encloses Israel in a mental ghetto on the way to a real ghetto. It would be a vote for a government that drives wedges between Jews and all those who aren’t Jews, including the Druze and Bedouin, who serve in the Israel Defense Forces (IDF), and between Israel and the Jewish Diaspora. It would spurn the entire world.

Senior officials at the Israeli Foreign Ministry are watching with great anxiety as European parliaments retreat, one after the other, from a policy of silent acquiescence in the perpetuation of the Israeli occupation. From day to day, it becomes harder for Israeli diplomats to convince public opinion that Israel is “the only democracy in the Middle East.” Israeli businessmen are reporting decreasing sales in Europe because of a consumer boycott. Shipping companies have had to absorb losses because of the refusal of dock workers in the United States to unload cargo arriving from Israel.

At his speech at the Saban Forum, Bennett argued that his annexation plan will not lead to a boycott of Israel, “because the whole world is using technologies made in Israel. Everyone wants our inventions and developments.” Beside that, “anyone boycotting Israel is an anti-Semite,” and “the world isn’t always right in its demands from Israel.”

Although 3,300 years ago the prophet Balaam cursed or blessed Israel that it would be “a people that shall dwell alone, and shall not be reckoned among the nations'' (Numbers 23:9), the world has changed since then. Whoever doesn't reckon the Americans, Europeans, Russians and Chinese will not forever dwell alone in the Middle East without inspection of its nuclear program, while at the same time campaigning against the Iranian nuclear program. Without the automatic veto that the United States casts in resolutions against Israel in the UN Security Council, it is doubtful that Israeli technology stands a chance of saving Israel from international sanctions. Even a religious Jew like Bennett knows that one can’t build the deterrence capability of the IDF on a military rabbinate and that there’s no substitute for replacement parts for Israeli military planes made in the United States.

A public opinion poll by Mitvim, the Israeli Institute for Regional Foreign Policies, published this week, shows that the Israeli public isn’t buying the anti-Semitism storyline and the wonders of technology that Bennett and his partners have been selling. Most respondents in the survey, conducted in September by the Rafi Smith Institute in cooperation with the Friedrich Ebert Stiftung, are aware of the erosion in Israel’s international status. Most of them believe that improvement depends on advancing the peace process.

In response to the survey’s findings, Professor Itamar Rabinovitz, a former Israeli ambassador to the United States, told the authors of the report that he was encouraged by the high degree of awareness among the public about the importance of Israel’s foreign relations and that the public is disturbed by the essential and perceptual damage caused to the state from perpetuation of the status quo. Rabinovitz finds in the poll’s data the basis for a change in policy by a leadership that seeks to make such a change. The crucially important determination — whether to give the reins of government to a new leadership that will open up to the world or to a leadership that will only raise the walls of fear — is in the hands of each person eligible to vote in Israel.