UNESCO resolutions recognizing the Palestinians' connections to Jerusalem and Hebron holy sites only empower the Israeli right in its refusal to negotiate. 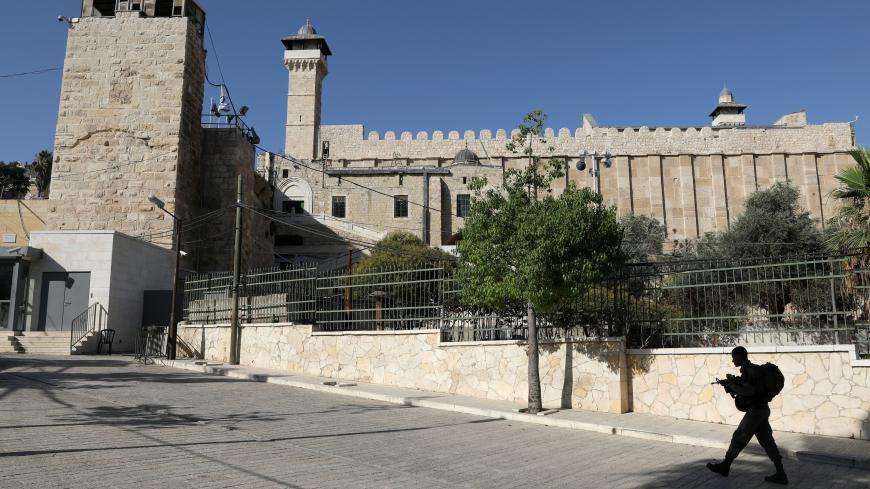 An Israeli soldier walks past Ibrahimi Mosque, known as the Tomb of the Patriarchs to Jews, in Hebron, West Bank, July 7, 2017. - REUTERS/Ammar Awad

The July 7 resolution by the UNESCO Heritage Committee recognizing the Tomb of the Patriarchs in Hebron as an endangered world heritage site was just what Prime Minister Benjamin Netanyahu needed. After everyone saw him strolling barefoot along the Mediterranean coast with his new pal, Indian Prime Minister Narendra Modi, Netanyahu was granted an opportunity to remind the people of Israel that the entire world is still against us. A display of friendship on the part of a world power like India could cast doubt on this perspective, anchored as it is in the biblical phrase by the Prophet Balaam about the Israelites: “A people that shall dwell alone, and shall not be reckoned among the nations.” In any case, after Modi’s gooey visit to the Holy Land, the Israeli public needs its regular fix of fear, xenophobia and muscle flexing.

US envoy Jason Greenblatt is once again shuttling between Jerusalem and Ramallah in an attempt to restart stalled negotiations between Israel and the Palestinians and freeze Israel’s settlements in the West Bank. How can one rely on the Americans to defend Israel when they are unable to convince a handful of countries to vote against what Netanyahu called “yet another delusional decision by UNESCO”? The UNESCO Heritage Committee decision, adopted by 12 member states with three opposing and six abstaining, concerns the perfect place at the perfect time for Netanyahu. For Jews of all religious shades, their affinity to the West Bank city of Hebron and the Machpelah Cave where their patriarchs are said to be buried are central to their state, religion and nationhood.

When anyone casts doubt about the affinity of the people of Israel to the inalienable historic and cultural assets of their homeland, Netanyahu can be assured that his bitter political foe, President Reuven Rivlin, the most unifying figure in Israel, will stand by his side. Indeed, Rivlin took off his gloves and accused UNESCO of “spreading anti-Jewish lies” even as the organization ignores the destruction of regional heritage sites by “brutal extremists.” Education Minister Naftali Bennett, whose office (together with the Foreign Ministry) is tasked with managing Israel’s ties to UNESCO, missed no opportunity to grab a headline. He claimed that the organization was intent to do no less than “wipe the Jewish state off the map.” Defense Minister Avigdor Liberman even accused UNESCO of anti-Semitism.

The politicians appear not to have read the text of the resolution, trusting that the public will not examine its content. First, the resolution does not refer in any way to the affinity or lack thereof of any people or religion to Hebron. Second, a statement issued by the Palestinian Foreign Ministry underscores that Hebron and the Cave of the Patriarchs are holy sites to a billion believers in the three Abrahamic faiths. Contrary to Netanyahu’s claim that “only in places in which Israel has a presence, like Hebron, there is freedom of religion for everyone,” Israel strictly limits the entry of Palestinians from the West Bank into the Old City of Hebron, also called “the Jewish Quarter.”

Israel’s ambassador to UNESCO, Carmel Shama-Hacohen, said after the Hebron vote that the call he received from his plumber during his address to participants in the debate was more important than the resolution. A senior Israeli Foreign Ministry official told Al-Monitor on condition of anonymity that Netanyahu had stirred up a media storm over a resolution of no practical importance and noted that the organization itself has openly declared it has no intention of implementing such decisions. According to the official, who is well-versed in the Israeli relationship with UNESCO, Israel is the main if not the only loser in the crisis it created, since UNESCO serves as a pipeline for resolutions that work in Israel's interests. He cited, for example, several recent UNESCO moves to recognize Israeli venues as world heritage sites.

Shama-Hacohen was right in saying that the Palestinians will not get to place their name on a sign at the newly recognized Hebron heritage site. UNESCO resolutions will not hasten the end of the 50-year Israeli occupation, just as UN Security Council resolutions do not stop construction in the settlements. Doesn't anyone remember Resolution 2334 adopted last year, condemning “all measures aimed at altering the demographic composition, character and status of the Palestinian territory occupied since 1967, including East Jerusalem”?

A diplomatic intifada will not get any closer to turning the PA into a Palestinian state than did the two violent Palestinian intifadas against Israel. The Muslim states do enjoy an automatic majority in most international forums, but Israel has the benefit of automatic US support. President Donald Trump spoke out against Resolution 2334 after he was elected, and his UN envoy Nikki Haley was quick to condemn UNESCO for its vote on Hebron. The way to end the occupation and establish a Palestinian state with its capital in Jerusalem is through the ballot boxes in Israel. Few issues help the Israeli right consolidate its hold on power better than damage to Israel’s standing at Jewish holy sites. Even a semblance of a swipe at the tombs of Jewish patriarchs and matriarchs sends the presses of nationalist propaganda into action.

The status of the sites revered by adherents of three major religions is too explosive an issue to be used as a pawn in a high stakes game by politicians and international organizations. The place to deal with it — if and when the citizens of Israel replace their current government — is around the negotiating table on a regional peace arrangement. It would be worth reserving a seat for religious leaders who believe that the lives of the sons are more precious than the tombs of the fathers.