Netanyahu faces off against UNESCO over Jerusalem resolution

Prime Minister Benjamin Netanyahu prefers to ignore the fact that from a diplomatic-international standpoint, the Jewish holy sites in the Old City are under occupation. 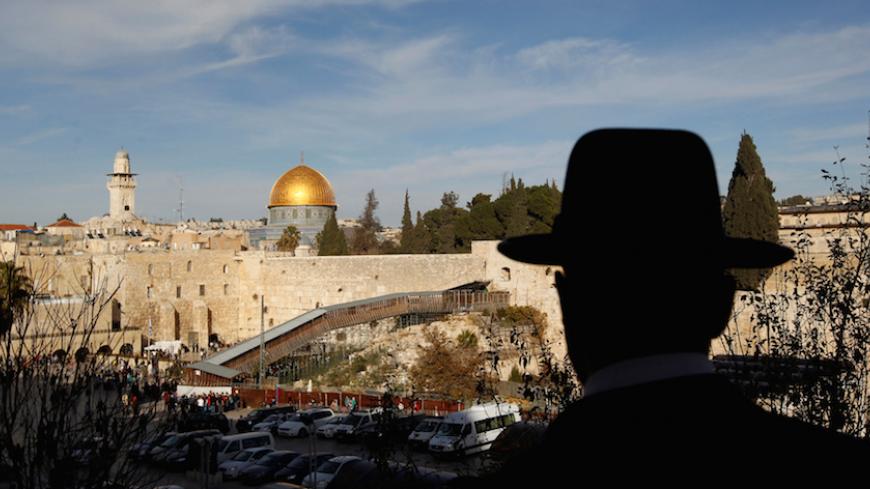 An ultra-Orthodox Jewish man stands at a viewpoint overlooking a wooden ramp (C) leading up from Judaism's Western Wall to the sacred compound known to Muslims as the Noble Sanctuary and to Jews as the Temple Mount, where the Al-Aqsa mosque and the Dome of the Rock shrine stand, in Jerusalem's Old City, Dec. 12, 2011. - REUTERS/Ronen Zvulu

Prime Minister Benjamin Netanyahu could not have asked for more. Even as the eyes of the world are turned to the prime minister in anticipation of his order to evacuate the controversial land robbers (settlers) from the West Bank’s Amona outpost, UNESCO turns the spotlight onto the Jewish people’s holiest and most consensual site.

The organization’s Oct. 13 draft resolution regarding the holy sites in Jerusalem ignores the age-old Jewish affinity for the Temple Mount and the Western Wall. The venue and timing of the decision couldn’t have been better for Netanyahu. For many Jews, the Arab states and the Palestinians who proposed the UNESCO resolution may as well have denied the Holocaust. The Temple Mount and the Western Wall of the Jewish Temple are not simply venerated by God-fearing Jews, they are milestones in the history of every Jew, serving as the grounding of the Jewish collective.

Sworn leftists and secular Jews are hard-pressed to justify the resolution (severely contested by Israel), which was reaffirmed Oct. 18 following a request by Mexico to change its vote. Even if we accept the absurd claim that there’s no link between the Temple Mount compound and the Jerusalem Temple itself, no organization or state has the right to dispossess any nation of its central narrative. Several years ago, during a debate about the status of Jerusalem, I witnessed an altercation between Israeli peace activists and a Palestinian participant who expressed doubt about the affinity of the Jewish people with the Western Wall. Several minutes later the Israelis were wolfing down copious amounts of non-kosher seafood. Indeed, this bond between a Jew and the Jerusalem Temple or Western Wall goes well beyond keeping the halacha, the ancestral law.

From a symbolic-national point of view, the prime minister was completely right when he compared denying Jewish people’s links to the Temple Mount and the Western Wall to denying China’s link to the Great Wall and the Egyptians’ connection to the pyramids. But that’s as far as the similarity goes between the Great Wall and the pyramids and the Temple Mount and Western Wall. Whereas there’s no controversy about China’s sovereignty over all parts of Beijing, and there’s no doubting Egypt’s sole sovereignty over Giza, Israel is the only state in the world that recognizes its sovereignty over East Jerusalem, in general, and the Temple Mount, in particular.

Netanyahu argued that with its decision UNESCO had “lost what little legitimacy it had left” and said he was sure that “historical truth is stronger and that truth will prevail. And today we are dealing with the truth.” But today’s world is more interested in the legal and diplomatic truth than in the historic one. The decisive truth is UNESCO’s 1972 convention on protection of the World Cultural and Natural Heritage, to which Israel is a signatory, which says, “It is for each State Party to this Convention to identify and delineate the different properties situated on its territory.” The operative words are “its territory.”

At a Nov. 2, 2010, Knesset debate, the secretary-general of the Israel National Commission for UNESCO, Daniel Bar-Eli, said, “The convention does not allow Israel to operate beyond the Green Line.” In other words, not even at the Western Wall and Temple Mount. Bar-Eli noted that “in principle, the Foreign Ministry has informed us that anything relating to the Old City of Jerusalem [where the holy sites are located] is a political, diplomatic issue.”

From an Israeli political standpoint, the Jewish holy sites in the Old City are heritage sites. But from a diplomatic-international standpoint, they are under occupation. Their 1967 annexation by Israel is considered a violation of international law. According to UN resolutions and the Oslo Accord, the sovereignty issue, prayer arrangements and preservation at these sites are supposed to be resolved in negotiations between Israel and the Palestinians. Netanyahu is familiar with this truth, as expressed in the UNESCO resolution. In February 2010, the prime minister gave in to right-wing pressure and added the Tombs of the Patriarchs in the predominantly Palestinian West Bank city of Hebron, as well as Rachel’s Tomb near Bethlehem, also in the West Bank, to the list of Israeli national heritage sites. The decision generated violent Palestinian protests throughout the West Bank.

Following that unilateral move, UNESCO determined that Rachel’s Tomb was a mosque and demanded that Israel remove the Cave of the Patriarchs from its list of national heritage sites. Then, too, Netanyahu drew on Jewish history and on national sentiment for the battle against the international viewpoint and for Israeli consciousness. "If the locations in which the mothers and fathers of the Hebrew people — Abraham, Yitzhak, Sarah, Rivkah, Leah and Rachel — were buried 4,000 years ago are not part of Jewish heritage, then what is?" the prime minister asked. It is unfortunate, he added, that UNESCO “is trying, for political reasons, to uproot the connection between Israel and its heritage."

But that protest did not just emanate from the organization that, to quote Netanyahu, had “lost what little legitimacy it had left.” The State Department of Israel’s greatest friend, the United States, labeled the decision as provocative and said it was damaging to efforts to bring the sides back to negotiations on a two-state solution to their conflict.

There’s nothing like a focus on the Jewish people’s holy of holies to serve Netanyahu’s strategy, designed as it is to push this solution to the furthest reaches of the Israeli-Jewish collective consciousness. Denying the Jewish people’s link to the Western Wall strengthens the prime minister’s claim that the Palestinian refusal to recognize Israel as the national home of the Jewish people is the real obstacle to peace — not the West Bank settlements. This leads directly to the conclusion that the idea of a territorial division into two states based on the 1967 border lines is a nonstarter.

Very fortunately for Netanyahu, UNESCO adopted its toothless resolution shortly before the Oct. 14 UN Security Council debate on Israel’s West Bank settlements. Representatives of Russia, the United Kingdom and France competed with each other in sharp criticism of Israel for building homes for Jews in the West Bank while demolishing Palestinian homes there. Egypt’s UN ambassador — that same Egypt whose peace initiative Netanyahu presented as an alternative to the French resolution and promotion of UN recognition of a Palestinian state — accused Israel of an illegal transfer of civilian populations. As expected, the mudslinging by the prime minister’s office was directed at the B’Tselem human rights organization, which testified on behalf of the Palestinians at the UN Security Council debate. Unfortunately for this courageous organization, it dared tell the world the truth about the Israeli occupation, even as its neighbors were slinging arrows at the Jews’ most sensitive spot.