Kerry has reason for optimism on Israeli-Palestinian talks

The US secretary of state's optimism over the Israeli-Palestinian talks is reasonable, considering their current goals: Right now, the sides are mapping out the points of disagreement, something they may well accomplish. 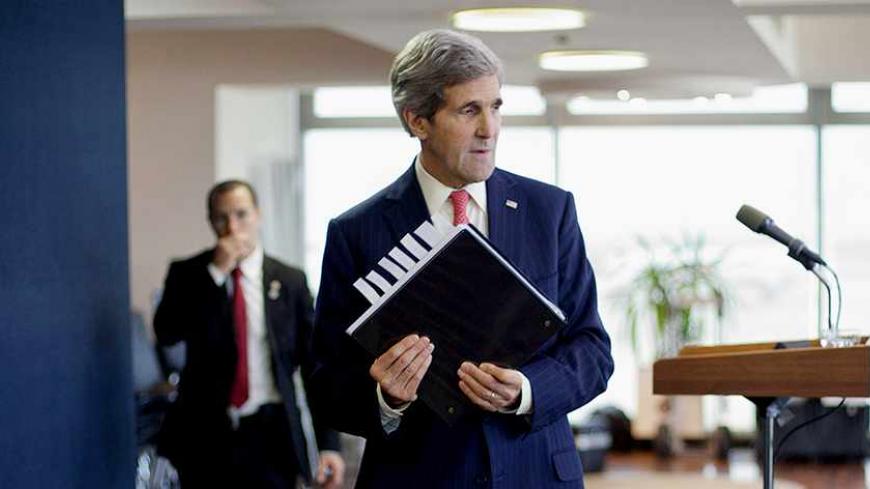 US Secretary of State John Kerry picks up his notebook as he prepares for his departure from Ben Gurion International Airport in Tel Aviv, Dec. 6, 2013. - REUTERS/Pablo Martinez Monsivais

"Opsimism" is a term coined by the late Israeli Arab writer and winner of the Israel Prize for Arab Literature Emile Habibi (1922-1996). This term, which embodies a rare combination of optimism and pessimism, best describes the negotiations between Israelis and Palestinians in light of the contradictory statements voiced this week (Dec. 6-8), which succeeded in further confusing those who track the talks' progress or lack thereof.

After shuttling between Jerusalem and Ramallah one more time before heading back home, US Secretary of State John Kerry surprised everyone with his optimistic statement: "I believe that we are closer to a peace agreement than ever before."

But even before anyone succeeded in understanding the source of Kerry's great optimism, Foreign Minister Avigdor Liberman and Defense Minister Moshe "Bogie" Ya'alon poured cold water on the idea and revealed another difference of opinion between Israel and the United States.

"We are at a dead end. … I don't believe that it will be possible in the next year to achieve a comprehensive solution, to achieve some breakthrough," Liberman said over the weekend in his speech at the forum of the Saban Center for Middle East Policy in Washington. Ya'alon continued in the same pessimistic vein at the Global Israel Business Conference and said, "As someone who was in favor of Oslo, I learn that we have no partner on the other side for the two-state solution."

It is hard to believe that the two highest-ranking ministers in the Israeli government are not up to date on the negotiation details. We can assume that if dramatic progress had indeed taken place in the course of Kerry's visit, Liberman and Ya'alon would know about it and not hurry to confute or contradict Kerry's words publicly.

At the end of the day, we have to ask: What is the truth? Is it possible that, despite the leaks about crises in the talks, something significant is really taking place between the Israeli and Palestinian negotiating teams?

A Palestinian source involved in the negotiations explained to me the causes of the discrepancies in the statements heard in the recent weekend.

The round of talks that began four months ago is supposed to end in another five months. That means that Israeli's chief negotiator Tzipi Livni and the Palestinian chief negotiator, Saeb Erekat, are supposed to conclude their discussions in the month of April 2014, or June at the latest (if an extension is warranted). But Al-Monitor has discovered that the mission imposed on the negotiating teams is not to reach a comprehensive peace agreement, but only to formulate a detailed working document that will lead to more in-depth discussions between the leaders, who include Prime Minister Benjamin Netanyahu, Palestinian Authority Chairman Mahmoud Abbas and their American intermediary.

According to this principle, based on an American method disseminated to the two sides, the main mission is to map out the greatest points of disagreement between the sides on the gamut of core issues and find points of agreement or gaps that can be bridged. The sides were requested to bring to the table creative suggestions for resolving major disagreements and formulate accords on issues that they could resolve between them.

According to this same source, the only subject that has been dealt with by the two sides to date is what is called "security arrangements" demanded by Israel and concerns the question of an Israeli presence in the Jordan Valley, if and when a Palestinian state is to be established. This is the major disagreement between the sides; the Palestinians are not at all willing to accept the principle of the presence of Israeli military forces in the Jordan Valley and in areas that will be included within the boundaries of the Palestinian state.

The rest of the core issues, called the "main minefields" by the Palestinian source, have not even been placed on the table for serious discussion. They have not been mapped and no creative suggestions have been submitted to resolve them. In other words, issues such as Jerusalem, the fate of the settlements and the issue of refugees –– all these issues have not been discussed, at least not seriously, even though these are the issues whose resolution would dictate the success or failure of any agreement.

The source blames Israel for focusing only on security issues like the Jordan Valley, while the real land mine issues (such as Jerusalem and the settlements) have not come under discussion. Thus, the cauldron is still bubbling and the safety valve has not yet been opened.

The sides, which have been arguing for the last four months, are not meant to reach a final agreement but only to sketch a framework agreement: understandings on issues in which there is no agreement. The document that they will draft will constitute the basis for in-depth negotiations that will naturally require painful decisions.

This explains the contradictory statements heard over the recent weekend.

When Kerry says that the sides are "close," he refers to the way the sides map their points of disagreement while simultaneously mapping points of agreement or gaps that are bridgeable. For those looking at the half-full glass, as Kerry evidently does, the road to an agreement seems promising, which is the source of his optimism. But those like Ya'alon and Liberman –– who look at the long road ahead and the disagreements on the subjects of settlements, Jerusalem and the refugees –– only see the half-empty glass. After all, the big minefields are still hidden deep in the ground.

Thus, when US President Barack Obama says at the Saban Forum in Washington, "We know what the outline of a potential agreement might look like," he refers to the outline of what the United States views as a basis for the framework of a peace agreement between the Israelis and Palestinians.

Only one great question remains hanging in the air, the question that Obama himself asked: "Are both sides willing to take the very tough political risks involved?" It would seem that Liberman and Ya'alon gave the answer to this question.

So what is the basis for Kerry's optimism, you ask? It is that the sides continue to talk, and neither Netanyahu nor Abbas must make dramatic political decisions at this point in time.