US Still Believes 'Business With Bibi Is Possible'

The US seems to believe that Israel's Prime Minister Benjamin Netanyahu is not the main obstacle to peace. 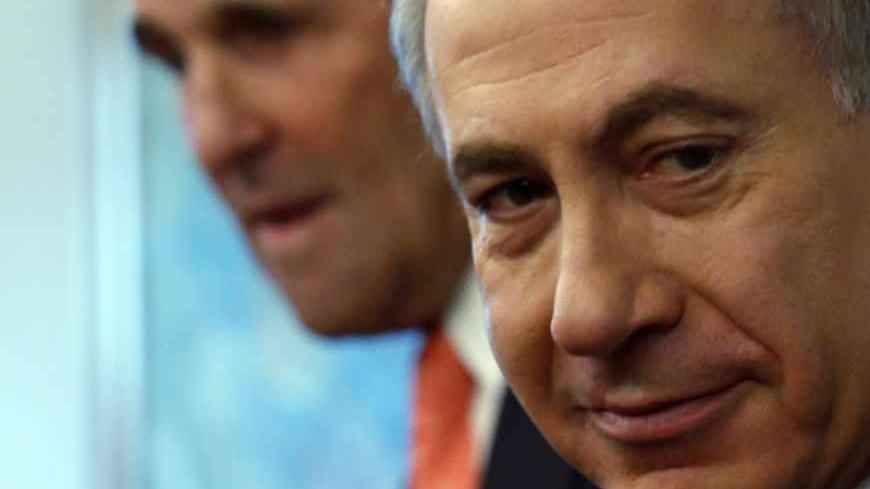 The fate of the negotiations between Israel and the Palestinians will be determined over the next two weeks. It is still quite possible that we will have to announce their untimely death, while they are still in their father’s (Secretary of State John Kerry’s) womb.

The negotiations may yet founder and die before they even see the light of day and scream for the very first time. On the other hand, it is possible that the parties will return to the negotiating table after a four-year hiatus, only to discover that the gaps between their positions are just as hefty as before, or that they have even gotten heftier over the years (as happens to all of us).

It has already been reported that Palestinian Chairman Abu Mazen extended the final, decisive date by two weeks. The Americans are sending out contradictory messages (on one hand, we cannot want peace more than the two parties themselves, while on the other hand, we seem to want peace more than both of the parties), and, the Israelis are bickering among themselves. Only Kerry is still running back and forth in a frenzy, still believing.

Here is what is happening. Right now, the Americans don’t consider Prime Minister Benjamin Netanyahu to be the real obstacle to renewing the negotiations. The Americans have reached the conclusion that it is possible to do business with Netanyahu. He is not a real ideologue. What motivates him is his desire to survive politically. So, if Bibi [Netanyahu] believes that he can get his coalition to support negotiations with the Palestinians, he will go for it.

According to American sources, the real obstacles are the people on Bibi’s periphery, led first and foremost by Defense Minister Moshe “Bogie” Ya’alon. The Americans have invested quite a bit in Ya’alon and plan on expanding that investment soon. They are bothered by the sight of Ya’alon drawing closer to the settlers, by the support that the settlers receive from Ya’alon, and by the lack of support that Bogie gives to the chief of the Central Command, Gen. Nitzan Alon, who is detested by the settlers.

Another obstacle no less commanding than Ya’alon is former Foreign Minister Avigdor Liberman. The Americans enjoy every minute that Liberman remains out of the political system, and pray that things stay that way forever. They take a close interest in his trial, and are keeping their fingers crossed, hoping that the prosecution wins. They are fully aware that if Liberman is acquitted, he will immediately turn into an enormous burden, weighing Bibi down. They don’t want that to happen.

The deal should go something like this: Israel will release a list of “pre-Oslo” prisoners. This is a long and bad list of prisoners who were charged with serious crimes, with some of them even convicted of murder. Though Israel will not announce that it is freezing construction in the settlements, it will do that quietly, with a few isolated exceptions to be approved discreetly among all parties.

In return, the Palestinians will receive an attractive economic package, and Israel will announce a series of benefits in Areas C and B, which will markedly improve the Palestinians’ freedom of activity and movement. The problem of the access road to the new city of “Rawabi” will also be resolved (right now, it is Ya’alon who is holding up the road). In exchange, the negotiations will be resumed without any preconditions. It will not be resumed from where the negotiations between former Prime Minister Ehud Olmert and Abu Mazen left off, but from where the negotiations between former Palestinian Prime Minister Abu Alaa and Justice Minister Tzipi Livni stopped. The underlying principles will be: “Everything is up for discussion. Nothing is settled until everything is settled.”

What are the chances of that happening? Fifty-fifty, as usual. As of now, Netanyahu insists that most of the Israeli gestures take place after the resumption of the peace talks and during the negotiations. The Palestinians want everything in advance.

The Americans are upset about the absence of Ron Dermer, who quit (and will not be the Israeli ambassador in Washington or Ottawa), because attorney Yitzhak Molcho, who is the final voice that Netanyahu listens to, is currently considered somewhat less enthusiastic about the resumption of the peace talks. Molcho conducted secret negotiations with Abu Mazen’s representatives over the past few years, but these talks led nowhere, and he lost faith in the Palestinians.

Meanwhile, the Palestinians lost faith in the Israelis, especially after reading Finance Minister Yair Lapid’s interview with The New York Times a few weeks ago. The Palestinians placed a lot of hope in Lapid and were convinced that his rapid rise to power strengthened the Israeli peace camp. After that interview they realized that his rise to power ultimately weakened the peace camp. This forced Kerry to invest quite a bit of effort explaining that the real Lapid is very different from the Lapid whom they read in the Times. The question is whether Yair Lapid knows that too.

The Americans’ scenarios also include the possibility of a change to Israel’s ruling coalition. They maintain close contact with the leader of the Labor Party Shelly Yachimovich, and would be very happy if Netanyahu replaced Economy and Trade Minister Naftali Bennett with the gang from the Labor Party. After all, they were always on the lookout for ways to make peace, and they conducted their search with almost the same intensity that they sought out ways to suck at the teats of government. What we have now is a chance for the Labor Party to fulfill both these dreams — peace and a return to government — all on the same ticket. Netanyahu would also be happy to make the switch, but for the wrong reasons. He really wants to get rid of Naftali Bennett and Knesset member Ayelet Shaked. Not for peace with our neighbors, but for peace at home, in the prime minister's residence.

Should the most optimistic scenario unfold, then it should begin to happen at the meeting of the Arab League (yes, there is still an Arab League, even if the Arab world is in flames), where Abu Mazen will be authorized to conduct negotiations with Israel. At the same time, all the parties will recognize the Arab Peace Initiative (albeit with minor reservations from the Israelis) as the basis for everything, and then everyone will saunter off into the horizon with their arms around each other.

The problem is that as they walk toward that diplomatic horizon, they will discover that it is actually moving farther and farther away from them.

John Kerry is one of the most powerful people to tackle the Israeli-Palestinian peace process in the past few years. He is determined, he believes in it, he has been granted complete freedom from the White House to do what needs to be done, and he knows all the players intimately. Is that enough? History and statistics say that it isn’t. Kerry is like a little salmon, trying to swim upstream. He’s about to reach Niagara Falls, but from the wrong side.