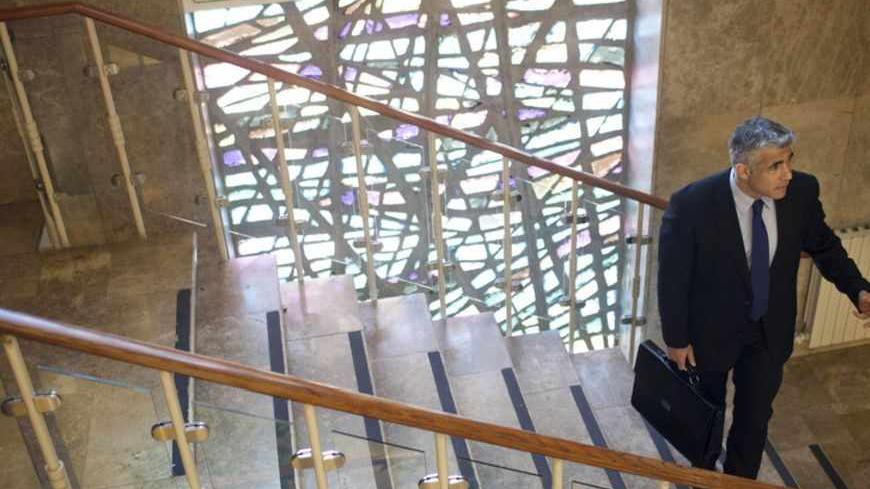 Finance Minister Yair Lapid’s diplomatic doctrine, revealed in a comprehensive interview that he gave to The New York Times (May 20), surprised many in Israel. Voters and commentators alike. How is it possible that our Yair, that handsome, bushy-haired boy from the posh Tel Aviv suburb of Ramat Aviv, the knight in shining armor who rode up on a white horse to subdue the government of those right-wing dragons Prime Minister Benjamin “Bibi” Netanyahu and former Foreign Minister Avigdor Liberman, the Tel Aviv bubble’s own envoy in Jerusalem — how is it possible that he came to adopt the rhetoric of the preachers on the right? For anyone who has forgotten, Lapid spoke to Jodi Rudoren of The New York Times about his opposition to freezing construction in the territories as a precondition for renewing the negotiations, about how it is impossible to divide Jerusalem, about Palestinian Chairman Abu Mazen as “one of the founding fathers of the victimizing concept of the Palestinians,” etc., etc.

This was no slip of the tongue. Lapid has a tendency to appease his listeners. He is a good man, in the most positive sense of the term. Unlike his father, the late journalist and politician Tommy Lapid, Lapid is not argumentative. He doesn’t enjoy being pugnacious. He likes it when people like him. So one would expect that in an interview with The New York Times his slips of the tongue would be the opposite of what he actually said. After all, it’s The Times, for God’s sake, and they would love to hear about how he longs for peace and how he is willing to accept former Prime Minister Ehud Olmert's peace proposals immediately. They would love to hear the saccharine, conciliatory remarks he hopes to whisper into Abu Mazen’s ear if the Palestinian leader would only agree to walk with him into the sunset.

But what actually happened was that Lapid said the exact opposite of all that.

I believe that it was all calculated and planned in advance, on both a macro and a micro level.

Let’s start with the macro. Here in Israel, people aren’t elected prime minister by the left. Period. They used to be, but that ended with the 1977 turnover, when the Israeli right came to power for the first time. The Israeli electorate is suspicious of the left. They feel uncomfortable with it. Prime ministers in Israel come from the right, and only start shifting to the left after they are elected. They almost never move in the opposite direction. The late Prime Minister Menachem Begin was elected as the leader of the right, and he dashed off to the left, returning the entire Sinai, down to the last grain of sand. To get himself elected, the late Prime Minister Yitzhak Rabin turned into a wrangler and a security hawk who told the troops to “break their arms and legs” (after the first intifada erupted in 1987). It was only after he was elected that he moved left and headed to Oslo [Accords]. Netanyahu also moved left with his “Bar Ilan speech,” although in the case of Netanyahu, it always ends in words, not deeds. Former Prime Minister Ariel Sharon was known for his hostility toward Arabs, until he disengaged from Gaza and dismantled more than 30 settlements. Olmert, who came from the depths of the Likud party, was a predatory hawk as long as he served as mayor of Jerusalem. Once he became prime minister, he took a sharp turn to the left. The same thing happened to Justice Minister Tzipi Livni, but because she broke left prematurely, she never became prime minister.

Very few have moved in the opposite direction, including Minister of International relations and Intelligence Yuval Steinitz and Defense Minister Moshe “Bogie” Ya’alon. Neither of them served as prime minister, and at least one of them never will. And so, the Israeli reality is quite clear. To become prime minister, you have to convince Israelis that you will not sell them out to the Arabs. Once you are there, that famous political imperative of “What you see from here, you can’t see from there,” goes into effect. People break left to become the darlings of Washington, and also to try and bring peace. After all, when push comes to shove, Israelis really want peace.

Lapid is very well aware of this. It was his strategy throughout his entire campaign. His American pollster, Mark Mellman, said so explicitly in interviews and public statements. During the campaign, he said that it won’t help us to talk about peace, and he was absolutely right. People are switching from Livni to us, he determined, and he was being accurate. Mellman positioned Lapid’s messages based on a thorough and exacting analysis, mapping, and deconstruction of the Israeli spirit.

So let’s go back to that campaign. Three forces rose to challenge Bibi-Liberman: Tzipi Livni, who took 28 seats in the last election, Yair Lapid, and Labor Party Chairwoman Shelly Yachimovich. Livni talked about peace. All she talked about was peace. She received six seats. Yachimovich spoke about a social democracy, but she didn’t bring up peace. She received 15 seats. Lapid spoke about the middle class and opened a well-lit pathway to the right. He went to the West Bank city of Ariel and delivered his speech about the diplomatic process. He opposed the partition of Jerusalem. By responding to center-right voters with a wink and a nod, he was able to suck them into his living room like a giant magnet. He got 19 seats.

Lapid’s working assumption was this: The peace camp in Israel today represents 20 seats among the country’s Jewish electorate, 25 at most. These seats are already in the firm grasp of Meretz (six), Livni (another six), and a few more for the Labor Party. They make up the classic peace camp and the country’s real left.

The other Israelis, the ones in the center, want peace, but they are afraid. They long for peace, but they are suspicious. They would be willing to sign a peace agreement, but they also believe that there is no one on the other side to sign it with them. They simply don’t trust the Arabs. And here is another remarkable finding. This is also the opinion of many hundreds of thousands of Israelis who are on the “soft” right, i.e., the non-ideological right. The breakdown on the right is similar to that on the left. Those who belong to the genuine right vote for Economy and Trade Minister Naftali Bennett, and maybe for Liberman, too. But most people veer right out of fear rather than conviction. That is why they are open to new ideas.

So when Lapid says that Abu Mazen represents the Palestinian sense of victimhood, he is speaking on behalf of millions of Israelis who are still waiting for Abu Mazen’s response to the far-reaching peace proposal he received from Ehud Olmert. Lapid believes that the greatest reservoir of votes in Israel lies to his right, and not to his left. He is here to steal the kitty from Bibi and Liberman, and not from Livni and Yachimovich. He’ll be able to get along with them. They’d make great partners in his next coalition. Lapid came to do business, and he meant it. His stake is the most important stake of all in the political arena. From there he can suck in voters from the right, from the center, and even a few from the left. That is how he will become prime minister, according to Lapid and according to Mark Mellman too.

On a professional level, this approach is both correct and wise. Still, it does not mean that Lapid will be Israel’s next prime minister. There is often just a hair’s breadth distance between a corporal and a croix de guerre. To succeed in Lapid’s political dance, accuracy and ingenious timing is absolutely essential. Israelis are fickle, rash, irritable, and vindictive. Lapid could work with the most sophisticated pollsters and formulate the most intelligent messages, and yet he could still come crashing down. Sometimes, all of that winking to the left and to the right leaves you with nothing but an annoying tick.

Lapid is now in the midst of a decisive probationary period that will ultimately determine his fate. On the economic front, he’s already broken explicit promises that he made to his voters. He already taken the heat for his own “Read My Lips” speech. His credit line has been cut back. That is why his interview with The New York Times may have come at the worst possible moment. After all, he just broke his promises and issued new decrees. Why does he feel that it is so urgent to annoy the elites again, and to do it now, of all times?

I would recommend that Lapid takes the time to study the biography of Nochi Dankner, the Israeli wunderkind, the man with the golden touch, that handsome, bushy-haired man, who just recently became the national punching bag and lost his life’s work. That is because, here in Israel you need people to believe you, before you start analyzing another in-depth survey, before you do anything else, in fact. Mazal Mualem was very much on target, when she used this forum this week to describe Lapid as “Bibi’s twin.” Until now, Lapid’s advantage was that he only took the good from Bibi. The bad, and with Bibi there is plenty of that, he left out.

Lapid’s great advantage was that Israelis believed him. If Lapid loses the trust of the people, his messages won’t help him and Mark Mellman won’t save him. He will not be prime minister.