Playing with Fire On the Temple Mount

Provocative visits to the Temple Mount by Knesset members and ministers from the right could prove costly, writes Nadav Perry. 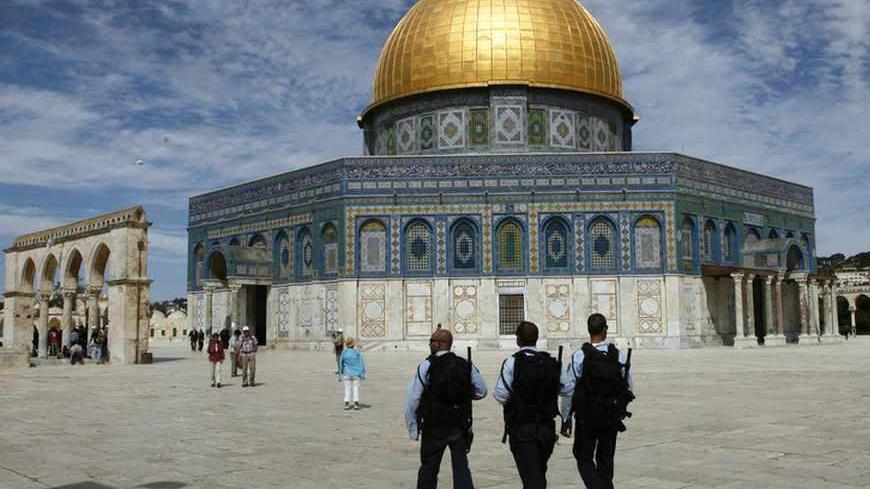 Israeli police officers walk in front of the Dome of the Rock, on the compound known to Muslims as al-Haram al-Sharif and to Jews as Temple Mount, in Jerusalem's Old City March 17, 2010. - REUTERS/Baz Ratner

Police assigned to the Temple Mount in the Jerusalem District have been kept quite busy since the 19th Knesset was sworn in. In March, it was only at the very last minute that they successfully prevented Knesset Member Moshe Feiglin (Likud) from visiting the most sensitive spot in the entire Middle East.

Feiglin, one of the most powerful people in the ruling party, is a “regular visitor” to the Temple Mount. He continues to visit there in his new position, not only as a Knesset member but as its deputy speaker. Knesset Member Miri Regev, from the same party, has also earned herself a reputation as a provocative firebrand. Immediately after being elected this week to serve as head of the Knesset’s Internal Affairs Committee, she announced that she plans to organize a visit to the Temple Mount by the committee. According to Regev, the pretext for this visit is “to protect the rights of Jews to pray at the site.” In September 2000, then-Prime Minister Ariel Sharon ignited the second intifada when he made a very public visit to the Temple Mount. Now it seems like Regev is determined to ignite a third intifada.

Minister of Housing and Construction Uri Ariel also visited the Temple Mount as recently as last Passover, on March 29. He went up there, walked a few meters from the Al-Aqsa Mosque, muttered a silent prayer and left, but only after the policemen accompanying him prodded him to end his visit before a riot erupted. On a more general note, the Minister of Housing and Construction, who happens to be another key player in the current coalition, has recently taken the opportunity to visit several especially sensitive areas. On the eve of Independence Day on April 16, he was guest of honor at a ceremony conducted by the mayor of Maale Adumim in the E1 zone, connecting his city with Jerusalem. While Washington and Europe alike continue to keep a close watch on that contentious area to ensure that Israeli declarations of intent to build a new neighborhood there are not realized, the minister announced that he intends to move forward with development there. “In just a year and a half, we’ll see houses here,” he promised.

Three months have gone by since Israel held its elections. The surprising results proved that Prime Minister Benjamin Netanyahu is not quite as strong as everybody thought he was, and that the right-wing bloc and the center-left bloc have more or less reached a state of equilibrium. While it is safe to assume that these results were received with some degree of satisfaction in many capitals around the world, a more cautious examination of what has been happening in the short time since Netanyahu formed his third government gives the impression that it is business as usual in Jerusalem. From the Temple Mount to E1, the song remains the same, and so does the policy. It looks like Minister of Justice Tzipi Livni, who is also the minister responsible for “promoting the peace process” (just like former Defense Minister Ehud Barak was in the last government), will have little left to do but to mumble a terse condemnation while her coalition colleagues continue to build new settlements in the Territories and make prayerful pilgrimages to the Temple Mount.

Last week,[ U.S. Secretary of State John Kerry visited the region. The overall impression is that Kerry entered his new office full of vigor and enthusiasm. Upon returning to Washington, Kerry told Congress [April 17], “I believe the window for a two-state solution is shutting. I think we have some period of time — a year to year-and-a-half to two years, or it's over.” One is left to wonder how impressed people like the new Minister of Defense Moshe Ya’alon were by this prognosis. Of course, it should be said to Ya’alon’s credit that he never concealed his position. The same is true of Netanyahu’s loyal partner former Foreign Minister Avigdor Liberman, who is waiting to return to the Foreign Ministry, which is being kept vacant for him [until legal procedures against him are concluded]. Ya’alon, like Liberman, has no faith in the leadership of the Palestinian Authority or in its ability to reach a diplomatic breakthrough. It has even been reported that when Kerry met with Netanyahu and his senior ministers to discuss ways to advance the diplomatic process, the Minister of Defense responded by criticizing America’s inability to deal with the Iranian nuclear threat.

Given all of the above, the president of the United States can come to Jerusalem to deliver inspiring speeches about peace, and his secretary of state can continue to shuttle between Netanyahu and Palestinian chairperson Abu Mazen. Back in Jerusalem, Knesset members on the right aren’t particularly impressed. The next time the Americans ask the prime minister to launch a diplomatic initiative or to make gestures to the Palestinians, he will tell them the exact same thing that he told them in his last term in office: “I want to, but I can’t. My coalition partners won’t let me.” So what if there have since been elections and the right wing saw its strength decrease? Whenever Netanyahu thinks about the diplomatic process or trust-building measures, he’s not thinking about Tzipi Livni, for whom the diplomatic process is the sole item on her agenda. Nor is he thinking about Minister of Finance Yair Lapid, who declared that he would not enter any government that does not renew the diplomatic negotiations. No. When Netanyahu thinks about diplomatic initiatives, he immediately envisions Defense Minister Ya’alon and (potential) Foreign Minister Liberman, who have a tendency to pour cold water on any plan to make a gesture of good will to the Palestinians, or even any thoughts of making such a gesture. Netanyahu sees Uri Ariel, who wants to build in E1, he sees Danny Danon, who represents the settlers in the Ministry of Defense, and he sees Miri Regev, who is busy planning a visit to the Temple Mount.

That is Netanyahu’s coalition, and those are the people who will ultimately influence any steps taken by the new government to advance the diplomatic process. If Kerry is counting on support or cooperation from more moderate players like Livni or Lapid, he may as well just pick up the phone and call his predecessor Hillary Clinton, who was counting on similar support from Ehud Barak. He should probably ask her how that worked out (or not).