Temple Mount blindness: Bibi takes the nation for a ride

Ministers Tzipi Livni and Yair Lapid, who continue to hold to their Cabinet seats, are as much to blame as Prime Minister Benjamin Netanyahu for the lack of diplomatic progress with the Palestinians and the risk of a third intifada. 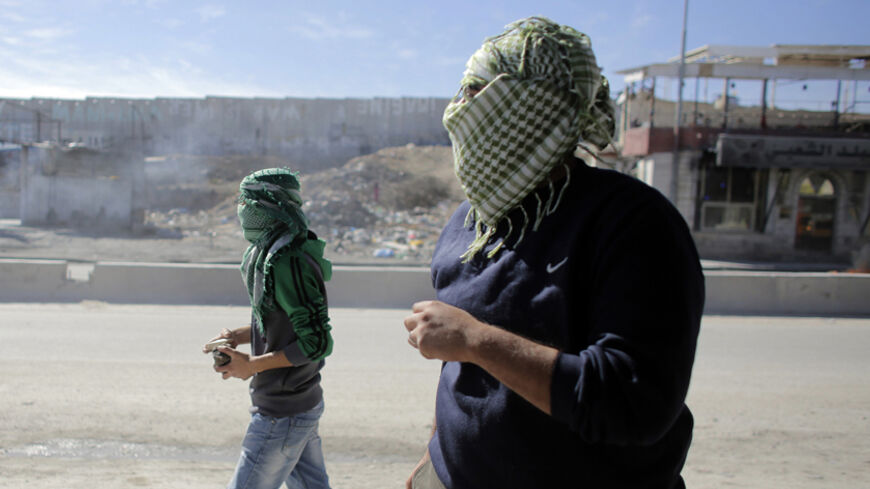 Palestinian protesters take position during clashes with Israeli troops following a protest against what organizers say are visits by Jewish activists to Al-Aqsa Mosque, at Qalandia checkpoint near the West Bank city of Ramallah, Nov. 7, 2014. - REUTERS/Ammar Awad

Fewer than three months have passed since the controversial conclusion to the Protective Edge campaign in Gaza Aug. 26, and the wave of violence flooding Jerusalem has dumped yet another security challenge on Prime Minister Benjamin Netanyahu’s doorstep.

The vehicular terror attack on Nov. 5 at a light rail station in Jerusalem, in which two civilians were killed, was another severe incident in a string of violent acts. All this is beginning to emerge as an organized Palestinian battle for sovereignty of the city.

Again — as before and during the Protective Edge campaign — Netanyahu finds himself challenged by the hard-core right-wing flank of his government and party. Throughout last week, several of them went on well-publicized tours of the Temple Mount and heated up an already combustible atmosphere, while the premier was unable to control them. The contingent included Knesset members Miri Regev, Shuli Mualem, Moshe Feiglin, Housing Minister Uri Ariel and Deputy Transportation Minister Tzipi Hotovely, all of whom ascended the Temple Mount. Following these visits, and only after Jordanian King Abdullah demanded that the prime minister restore the peace, did Netanyahu personally contact the wayward Knesset members on Nov. 6, asking them to refrain from provocative behavior.

But on the eve of that same day, Netanyahu discovered that HaBayit HaYehudi Chairman, Economy and Trade Minister Naftali Bennett, continued to ignore him. Bennett persists in building himself up as leader of the right at Netanyahu’s expense — the same behavior that Bennett had exhibited during the Protective Edge campaign. At a Bar Ilan University conference, Bennett called on Netanyahu to embark on a new Operation Defensive Shield in Jerusalem and restore Israel’s deterrence capacity. Then he proceeded to hit Netanyahu below the belt when he said that a government that hides behind concrete blocks has no right to exist.

Bennett’s words were, of course, uttered with campaign and public-image intentions. Automatically, this kind of rhetoric raises the anxiety level in the prime minister’s office. The concern over there is that Bennett is plotting to be the one to dismantle the government to “restore sovereignty in Jerusalem.” This is exactly Netanyahu’s weak point; in recent weeks he has been conducting his own Jerusalem campaign, intended to kowtow to the right and give him extra points in the party primaries that he initiated. Apparently, the primaries for the Likud list are expected to be held in January 2015.

When facing all these occurrences in the defense and political arenas, Netanyahu remained true to form and acted from his comfort zone. First he blamed Palestinian Authority Chairman Mahmoud Abbas and Hamas leaders as being responsible for the vehicular attack and escalation in Jerusalem in general, exactly as he did after the abduction and murder of the three youths in June. At the same time, he convened a long security consultation, in the course of which it was decided to protect all the light rail stops in Jerusalem with concrete railings.

Bennett is actually right about one thing: Defensiveness is not the solution. HaBayit HaYehudi chair presents security pro-activism as the solution to the wave of terror in the capital, and the right-wing Knesset members wrest control of the national agenda. Meanwhile, Netanyahu’s voice comes across as faltering. Moreover, in the middle space between the extreme right and a premier who is running between the drops, the voices of the moderates are silent and have disappeared — those who are supposed to present the diplomatic horizon as a solution to this powder-keg situation.

One cannot argue that the violence came as a surprise; senior defense officials have been warning for two years of the eruption of a terror wave, in the absence of a diplomatic horizon. On Nov. 7, it was even publicized in the Israeli media that Netanyahu was warned by intelligence in the current year that threats have been developing on the Temple Mount. And what did Netanyahu do? Not much, it seems.

After the Protective Edge campaign, the prime minister spoke about possible new diplomatic opportunities opening up to Israel in the area. Back then, Netanyahu seemed to suggest that Abbas was a “partner” for a new regional order. That Abbas was the solution and not the problem, that he was the moderating agent.

But it seems that ever since that same statement created an expectation of Netanyahu to demonstrate diplomatic courage and daring, Israel under his leadership is becoming more and more isolated on the international front. The days of the 2009 Bar Ilan speech accepting the two-state solution paradigm seem like a distant dream. Now Abbas is viewed by certain politicians as a “terrorist” and Netanyahu is, again, acting like someone pulling the wool over the eyes of his center-left coalition partners and their constituents. On their part, they prefer to keep their eyes closed and deny the fact that they are the fig leaves of a diplomatically paralyzed, hopeless government.

Instead of “new diplomatic opportunities,” Netanyahu continues to back provocative construction plans in the settlements and to bring Israel’s relations with the United States to a new low. A most instructive example of the damage caused as a result, was the letter sent secretly by President Barack Obama to Iran's Supreme Leader Ayatollah Ali Khamenei behind the back of Israel’s prime minister. There is truth to the assumption that if Netanyahu and Obama would have succeeded in creating a good close relationship, Netanyahu would have been more involved in the nuclear agreement taking form. Now, according to all the signs, this new agreement does not exactly take Israeli demands into consideration.

Now, again, our eyes turn to Tzipi Livni (Hatnua chairwoman and justice minister) and Yair Lapid (Yesh Atid chairman and finance minister) to present the reverse image of Bennett’s standpoint. When there is no diplomatic negotiation, the ground will burn under our feet and a third intifada, this time in Jerusalem, will engulf our lives because nature does not tolerate a vacuum. Yet, it seems that even in this case, the expectation that Livni, Lapid and Environmental Protection Minister Amir Peretz carry out their commitments to their voters and demand that Netanyahu immediately adopt a diplomatic initiative as a precondition for remaining in the government — is apparently exaggerated.

Therefore, should a Jerusalem intifada erupt, the fault will not be of Netanyahu alone, but of everyone who was part of this government. Even if they said the right things. Because when there is no hope, no alternative — violence erupts. Unfortunately, we’ve been there, done that — more than once.