In a series of attacks, four Syrian journalists living in Turkey's border towns were killed. Why are they such easy prey? 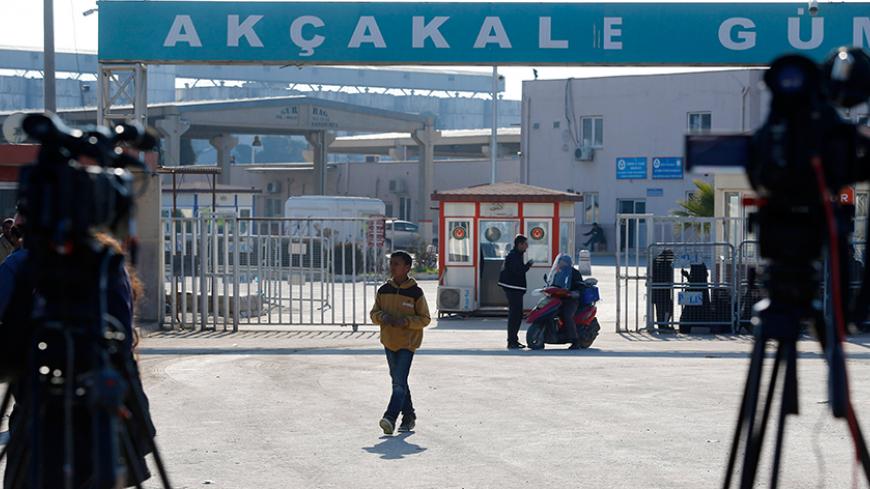 TV cameras are set up at the Akcakale border crossing to Syria in Sanliurfa province, southeastern Turkey, Jan. 29, 2015. - REUTERS/Osman Orsal

DIYARBAKIR, Turkey — Syrian journalist Mudur Al Saad was always saying, “We live in danger at Sanliurfa.” Recently he was attacked by two unidentified men wearing masks. He was beaten with iron bars and seriously injured. No one claimed responsibility for the attack.

This wasn’t the first attack against Syrian journalists within the past year. On Oct. 30, police acted on a tip and went to a house in Sanliurfa’s Ataturk neighborhood. They found two beheaded young men. Police were mystified until the identities and profession of the victims were discovered. They were Ibrahim Abdulkadir, editor of Arabic-language Al Watan newspaper, and its reporter Firaz Hamadi. The Sanliurfa-based newspaper was printed for Syrian opposition supporters. Friends said the two journalists had been receiving threats from Islamic State (IS). A short time later, IS claimed responsibility.

On Dec. 27, journalist Naji Jerf was murdered, this time in Gaziantep. Jerf, who had been threatened by IS, was shot and killed on the street. Jerf, renowned for his documentaries against IS, was the editor of the journal Hentah. He was killed with a silenced gun when he was out to buy food for this children and wife. Three suspects were detained.

Four months later, Syrian journalist Muhammad Zahir Al Sherkay was targeted in Gaziantep. The correspondent for Aleppo Today was shot by masked men and badly wounded. He died in the hospital.

Clues pointed to IS, and a short time later IS claimed responsibility.

On June 13, Ahmed Abdulkadir, the brother of the Al Watan editor who had been beheaded, was attacked by two men on a motorcycle. Abdulkadir, who had taken over as editor of the paper, is hospitalized. IS also took credit credit for this attack.

Saad, who works as a volunteer correspondent for Shrekat News Center in Sanliurfa, said he also has been getting threats. He said he doesn’t leave his house unless he has to. Saad says he is being targeted because he is close to the Free Syrian Army. “Those who are attacking me could be Daesh [IS], the PKK [Kurdistan Workers Party] or the Syrian regime. Nobody knows. I still get threats. I work from home and will continue to do so. After the attack I told the police what happened. They gave me a phone number and said I should call them if something happens. They said they will attach a guard to me if I go someplace. I am afraid of everyone,” he told Al-Monitor.

Ibrahim Ay, president of the Gaziantep Journalists Association, said Syrian journalists are killed because of their connections to various organizations. Ay said journalists are not being provided adequate protection.

“Syrian journalists are attacked because they know about the tangled relationships of the Syrian organizations and the true causes of the crisis in that country. They are executed by various organizations so as not to reveal the realities they know. Last month, two persons working as journalists were attacked in our city. Earlier a Syrian journalist was shot and killed in the street. Of course there cannot be a guard attached to each journalist but journalists can be better protected by providing the appropriate legal safeguards,” he told Al-Monitor. He thinks attacks can be prevented only when security is assured in the city and the region.

According to Kemal Kapakli, the president of the Journalists Association of Sanliurfa, the large numbers of unregistered Syrians in the city provide fertile ground for such crimes. Noting that journalists are carefully selected as target, Kapakli told Al-Monitor: “There are more than 100,000 Syrians in Urfa, most of them unregistered. We are in a city full of people who come and go on their own free will. We don’t know who they are. We don’t know the full reasons for the killing of two of our colleagues. But at the end of the day, the murders of two journalists who had taken refuge in Turkey expose the security flaws of our country and show that people living in this city, whether Syrians or Turks, are not safe. Most likely these are people who were close to the Syrian regime and had taken refuge in Turkey. You cannot ignore the number of Syrians in our city. They launch newspapers to provide news for their compatriots. We don’t see any ideological slants in their publications either against ISIS or the Syrian regime. Some say the murders could be linked to their past activities in Syria.”

“Nobody knows who is a journalist. They don’t declare their profession when they register. We learn about their journalism career after they are killed. We remain worried about more such attacks against journalists in Gaziantep and Sanliurfa,” he added. For Kapakli, attacks will end only when the border is secured and all Syrians in the city are registered.

Journals and newspapers published by Syrian journalists in Sanliurfa and Gaziantep are not produced through formal arrangements. They are edited in private offices, printed at local print shops and distributed by hand where Syrians congregate.