Turkey’s growth will continue with massive funds for reconstruction of destroyed towns. 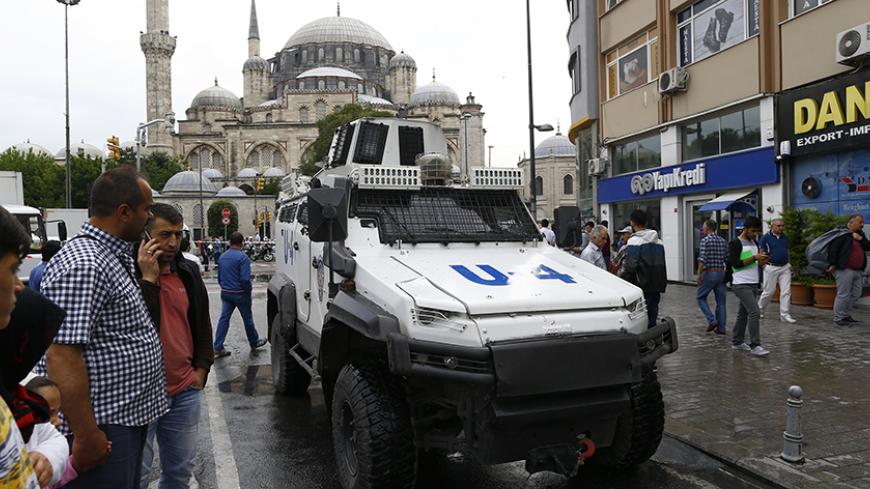 An armored vehicle drives near a Turkish police bus that was targeted in a bomb attack in a central Istanbul district, June 7, 2016. - REUTERS/Osman Orsal

The Turkish Statistical Institute (TUIK) has disclosed a 4.8% growth of the Turkish economy in the first three months of 2016, making Turkey the fastest growing economy of Europe.

Turkey was followed by 4.2% growth in Romania and Sweden. Turkey’s 4.8% growth, which is contrary to pessimistic forecasts, pleased the government but also enflamed the debate about its sources. Prime Minister Binali Yildirim and Deputy Prime Minister Mehmet Simsek have been gleefully saying that those who were warning of an economic crisis were proven wrong.

With the goal for growth in 2016 set at 4.5%, the government is happy to boast that the goal has already been exceeded, although it is below the 5.7% growth of the last quarter of 2015.

Ender Yorgancilar, the chairman of the Aegean Region Chamber of Industry, said the source of the growth is private and public expenditures and that private-sector investments had no part in it. He noted that Turkey has to create at least 1 million jobs every year.

The highest increase in private expenditures is in health expenses, which rose by 22%. This steep increase appears to be attributed to enormous amounts spent to care for hundreds of members of the police force, soldiers and civilians hurt in security operations and terror attacks.

State expenditures, which had gone up by 8.5% in the third quarter of 2015, have been steadily increasing and are now 10.9%. Analysts have noted that private and public expenditures that contribute most to economic growth have been rising parallel to stepped-up terror after the national elections on June 7, 2015.

The Justice and Development Party (AKP), which lost its single-party rule with the elections in 2015, has shelved the solution process to the Kurdish question and decided instead to intensify security operations in the southeast. Since then, the country has been in the throes of escalated violence, terror, suicide bombings, curfews and urban warfare. Thousands of soldiers and police were sent to the southeast on temporary duty accompanied by hundreds of tanks, armored vehicles, helicopters and special force units. Military expenditures for these operations — including accommodations, food, transport and ammunition for thousands of military and police personnel — have doubled the state spending. The substantial hikes in spending for anti-terror operations have been key elements of the economic growth.

Between January and May, the most noticeable budget expenditures have been a 17% increase of the president and the prime minister’s discretionary (slush) funds for confidential operations, and a 40.5% rise in defense and security spending.

Thus, expenditures in southeast operations and anti-terror struggles have boosted the national economic growth. According to the 2016 Global Peace Index of the Institute for Economics and Peace, Turkey has dropped from 135th to 145th place. The report writes that in 2015 it cost Turkey $94 billion to cope with terror and clashes.

Turkey’s region is described as the one with the most intensive accumulation of terror, clashes, immigration and displacement.

According to latest data by the UN High Commissioner for Refugees, Turkey is the country that hosts the most refugees in the world. No wonder that the approximately $20 billion for refugees that Turkey has spent, according to President Recep Tayyip Erdogan, has been yet another trigger of economic growth.

This growth is bound to continue with more state expenditures. Yildirim said, “Cities will be rebuilt” in the southeast. Deputy Prime Minister and government spokesman Numan Kurtulmus has said that towns such as Sur, Nusaybin, Sirnak, Cizre, Idil and Yuksekova that were heavily damaged in security operations will be reconstructed at a cost of $350 million in the first phase.

Erdogan and the AKP aim to sustain economic growth without boosting investments, exports or production and by lowering unemployment, with the money to be spent on combating terror and rebuilding destroyed towns. Such growth may put Turkey ahead of Sweden and make it the first place in Europe, but does it bring its citizens to the life levels of Swedes?