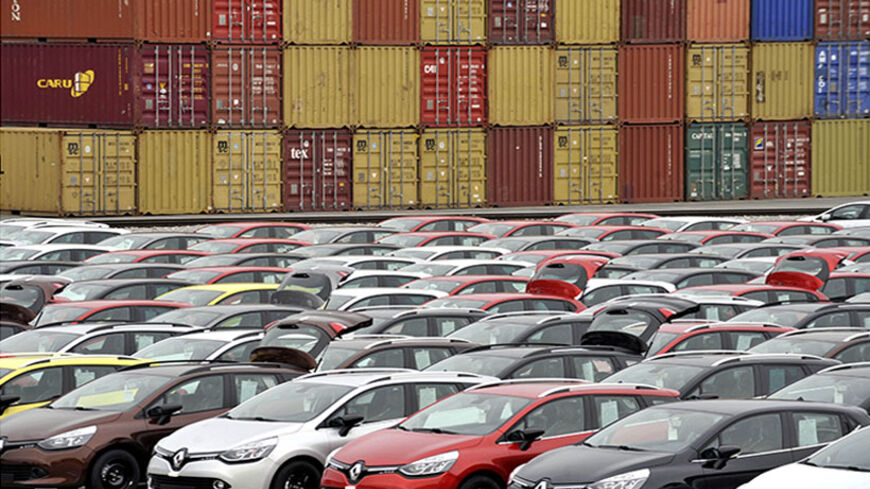 Renault cars produced in Turkey and awaiting export throughout Europe, are lined up in front of ship containers in the port of Koper, Oct. 14, 2013. - REUTERS/Srdjan Zivulovic

Turkey’s economy grew a surprising 4.3% in the first quarter of the year, beating the projections of the International Monetary Fund and the World Bank — 2.3% and 2.4%, respectively — and outpacing European Union countries, whose economies grew an average of 0.3%.

Prime Minister Recep Tayyip Erdogan was in a triumphant mood after the rate was announced last week. “At a time when many economies shrink or grow only minimally, Turkey’s growth rate in the first quarter has shown the whole world that its economy is an outstanding one,” Erdogan said. “When calculated retroactively on the basis of the first-quarter growth rate, our 12-month national income has reached 1.614 trillion Turkish lira. We have achieved a new record in Republican history in terms of Turkish lira.”

The growth rate Erdogan boasted of owes much to the financial sector, which he has often slammed as an “interest-rate lobby.” Finance and insurance services expanded a record 13.9% in the first quarter, translating to a 1.7-point contribution to the 4.3% growth rate. This means that about 40% of Turkey’s first-quarter growth was generated by the “interest-rate lobby.”

The growth rate may appear outstanding, but subcategories suggest a worrying indicator. Despite the solid growth, driven mainly by exports and public spending, investment in the private sector decreased by 1.3% in the first quarter. That is, the Turkish economy is growing without investment.

Pundits warn that maintaining the current growth rate will be hard unless private sector investment is revitalized. The 1.3% decrease in the first quarter wiped 0.3 points off the growth rate.

Production and demand was up in almost all categories, with only private sector investment in the negative. This is the sign of a serious problem. Deputy Prime Minister Ali Babacan, who oversees the economy, had already highlighted the issue on May 16, saying, “We don’t think that growth could be possible only through public spending. If we are to grow, we can do that through private sector investment and, of course, through exports.”

Exports and public spending have been major contributors to economic growth in the first quarter. Exports increased 11.4%, driven mainly by European economic recovery and demand. Public spending, meanwhile, rose by 8.6%. Growth in the construction sector, a driving force of economic growth under the Justice and Development Party, remained strong at 5.2%, despite falling from 6%.

Public spending in the first quarter, which coincided with the run-up to the March 30 local elections, was the highest since 2011. Many economists agree that spending increased because of the elections.

Turkey’s middle-term economic program projects the overall growth rate for 2014 at 4%. The target is expected to be easily achieved if private sector investment perks up.

While trying to boost economic growth, Turkey is also struggling to reduce its current account deficit. Odea Bank chief economist Inanc Sozeri said the current account deficit had decreased to 7.4% of gross domestic product from 7.9% in the previous quarter, and that domestic savings were up from 12.2% to 12.4%. Those indicators, he stressed, will lead market watchers to revise their growth forecasts for Turkey upward.

Economy Minister Nihat Zeybekci pointed out that the economy has now grown for 18 quarters in a row. “We have become the fastest growing country among 25 European countries. Turkey has to grow, produce, boost its exports and expand employment. It is impossible for growth to go down in the coming quarters,” the minister said.

Finance Minister Mehmet Simsek, for his part, stressed that the economy had continued to expand despite increased political risk in the first quarter. He said, “Recovery in the EU, our largest trading partner, and the competitive foreign exchange rate have had a positive impact on foreign demand, which contributed 2.7 points to the first-quarter growth. Recovery in the United States and the EU as well as the European Central Bank’s decision to lower interest rates will further support the improvement in foreign demand conditions. In this context, we expect economic growth to be of a more balanced nature in 2014.”

The Central Bank, a scapegoat in recent months, had said several days before the growth rate was announced that the Turkish economy would expand beyond expectations this year. The bank believes the 4% year-end target will be exceeded.

Despite the 8.6% increase in public spending, household expenditure was up only 2.9%, meaning that domestic demand is low and that public institutions have driven the growth. The increase in Turkish exports is expected to continue in the coming periods in line with the increasing demand in Europe.

The most significant shift the latest figures reveal is this: The Turkish economy, which had grown on domestic demand so far, appears bound to grow on foreign demand from now on. In other words, Europe continues to be Turkey’s savior.