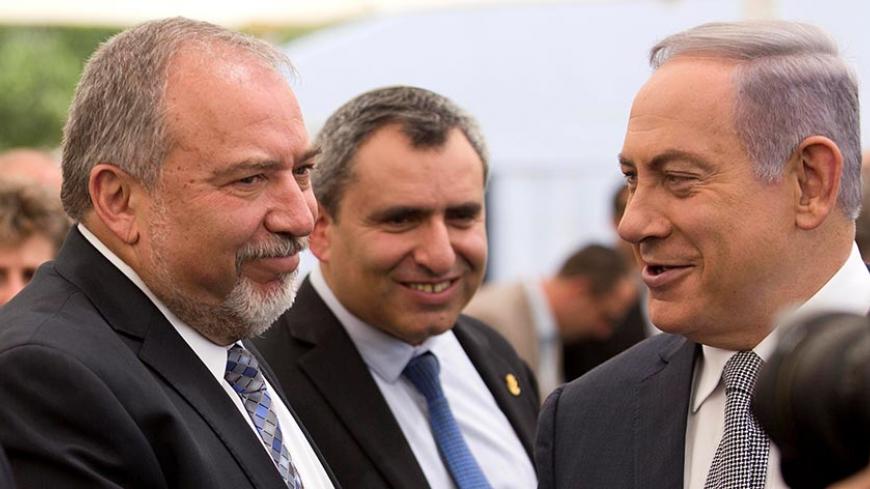 It was a theater of the absurd: Prime Minister Benjamin Netanyahu and Defense Minister Avigdor Liberman, minutes after Liberman took the oath of office May 30, talking to the press about their desire/agreement for a “two states for two peoples” solution and about recognizing positive elements in the 2002 Arab Peace Initiative, which the government would be ready to negotiate. Netanyahu actually believes that he can fool all the people all the time. Indeed, he succeeded this time, at least partly: The press was taken by surprise, Liberman’s entry into the Defense Ministry went over relatively smoothly in the world and not a single government publically called his bluff. The main purpose of these statements was to convince the US administration to take a more balanced position at the June 3 Paris conference in order to avoid a binding timeline.

Yet a bluff it was. There is no two-state solution process without a settlement freeze and a readiness to accept the 1967 lines with mutual land swaps as a basis for the negotiations. The Palestinians and the Arab countries will not engage anymore in negotiations for the sake of negotiations.

Furthermore, the phrase “two states for two peoples” was chosen carefully by the two right-wing leaders. It brings back to the scene the Israeli condition for the Palestinians to recognize Israel as a Jewish nation-state, knowing all too well that even the most moderate of Palestinian leaders will not accept what was not asked at the time (when peace treaties were negotiated) of neither Egypt nor Jordan.

At the June 3 Paris conference, Saudi Foreign Minister Adel al-Jubeir said that the Arab Peace Initiative could not be diluted. Netanyahu and Liberman are aware of this position. Hence, the press conference on May 30 was merely a masquerade for two leaders whose declared intention is to prevent a Palestinian state through the enhancement of settlement construction. They have no intention of engaging in serious peace negotiations. The European Union listened with curiosity and skepticism to the Israeli statements. No one in Brussels and the main EU capitals believes that Netanyahu, now with Liberman at his flank, is actively interested in a two-state solution.

A senior EU official close to Federica Mogherini, EU High Representative for Foreign Affairs and Security Policy, told Al-Monitor after the Paris conference on condition of anonymity that the fact that Israel and the Palestinian Authority (PA) were not present was helpful to achieve a relatively successful outcome of the conference. In the view of the senior official, the principal outcome of the conference is the highlighting of the “importance of the implementation of the Arab Peace Initiative” in parallel to relevant UN Security Council resolutions (primarily Resolutions 243 and 338). The US administration’s adherence to this text is important for future efforts, the EU official said.

This wording is very different than the reserved and qualified support for elements of the Arab Peace Initiative by Netanyahu and Liberman, who rejected the Paris communique outright. Egypt, Saudi Arabia and the PA are on board with this wording. According to the EU official, the wording of the joint communique of the Paris conference will now impact the content of the soon-to-be-published Quartet report. Mogherini is of the opinion that without a serious international diplomatic effort building on the outcome of the Paris conference, the situation in the PA will deteriorate dangerously in relation to violence and the threats to the stability of the Abbas regime.

The next steps that were discussed on the sidelines of the conference are related to an eventual Security Council resolution on halting violence and settlement expansion and on terms of reference for the two-state solution negotiations, along the Paris communique. The United States is opposed, at this point, to such a move. The French will continue to work in favor of an international peace conference before the end of 2016, with the two parties invited.

All parties are now working with the Nov. 8 deadline (US presidential election) in mind, wishing also to create a policy platform for the next US administration.