The vicious attacks by Likud members against Amir Peretz of the Zionist Camp and Tel Aviv Mayor Ron Huldai reflect the refusal by Israeli public opinion to accept any linkage between the occupation and terror attacks. 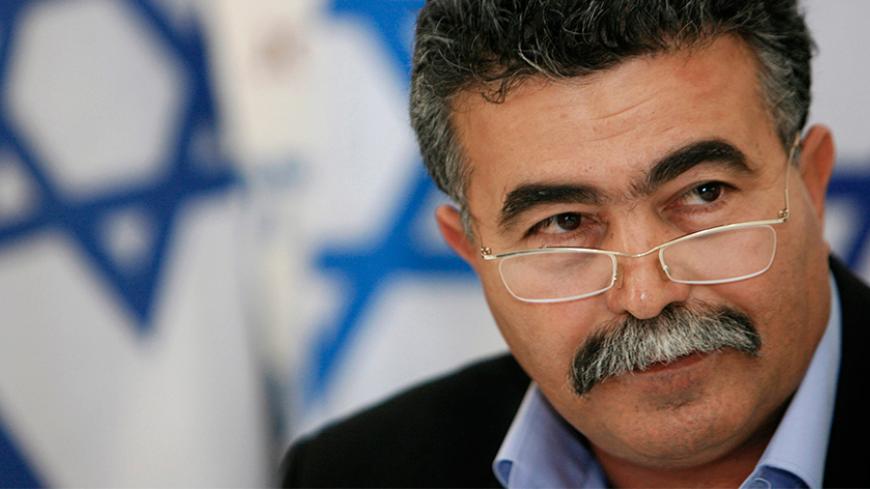 Knesset member Amir Peretz of the Zionist Camp is one of the most eloquent and reasoned spokesmen of the Israeli left on all that relates to the connection between the occupation and Palestinian terrorism.

Throughout a nearly 40-year political career, Peretz has been consistent in his adherence to the idea of two states. He did so as the head of the Sderot municipal council and as the chairman of the Labor Party and defense minister. Even when he served as minister of the environment in Netanyahu’s third government (2013-14) — as part of the Hatnua Party, which today is part of the Zionist Camp — he did not stop raising the diplomatic flag. When he quit that government in November 2014, he claimed that the lack of a diplomatic process is dangerous and that Prime Minister Benjamin Netanyahu does not take it seriously.

True to this worldview, Peretz spoke out against Netanyahu June 11 and held him responsible for the terror attack at the Sarona market in Tel Aviv.

“After 10 [nonconsecutive] years in which Netanyahu has served as prime minister, we can point to him as the central figure responsible for terror attacks taking place in the center of Tel Aviv,” Peretz said, raising a media and political storm.

A few days earlier, Tel Aviv Mayor Ron Huldai of the Labor Party also tried to stir up a debate on the connection between the occupation and Palestinian terrorism. Huldai, too, a fighter pilot in the Israel Defense Forces and brigadier general in the reserves, is mentioned (like Peretz) as a possible candidate to head the Labor Party. In an interview with Army Radio, he said, “You can’t keep people in a reality where you occupy them and they come to the conclusion that everything is all right.” Huldai also talked about the celebrations on the Palestinian streets after the attack and continued in the same line, “We’re the only country in the world where another people is under our occupation, not having civil rights.”

Peretz and Huldai’s statements fell like ripe fruit into the hands of the prime minister and his circle, which, as expected, did not miss the chance to make political capital out of delegitimizing the left. It is a strategy that has proved itself for years for Netanyahu: Instead of dealing with the problem itself — in this case, a wave of terror that does not stop — he attacks the left. For him, it is a win-win situation, especially when emotions are inflamed and public sentiment leans right, and is expressed by the idea that “there is no one to talk to” —namely, there is no negotiation partner on the Palestinian side.

This time, Netanyahu’s circle attacked with truly heavy fire: “When terrorists speak of occupation, they mean Tel Aviv.” The entire political left, accused Likud sources, had “gone off the rails, lost all touch with reality and adopted the talking point of the BDS movement [boycott, divestment and sanctions of Israeli products].”

Be it Tel Aviv or the Ofra settlement, Netanyahu refuses to admit that in the eyes of the Palestinian assailant it does not matter where the Israeli voter who perpetuates the rule of the West Bank occupier lives.

Listening to their statements, Peretz and Huldai are not and never were among the radical or far-out left. They were what was once called the “doves” in the Labor Party. They believe that the two-state idea is the way to fight terror in the long term. This is a worldview that could be argued, because it reflects the opposite of everything Netanyahu represents. It is what’s called an alternative. The problem with this path is that it has lost its relevance in Israeli public opinion in recent years. Some would say that in Netanyahu’s years in office since 2009 he has done everything in his power to prove there is no partner on the other side.

During some of that time some clear center-left figures, such as former Prime Minister Ehud Barak, Zionist Camp co-leader Tzipi Livni, Yesh Atid Chairman Yair Lapid and Peretz himself, sat next to him in the government. They were whitewash for his diplomatic destruction. In these years, enormous damage was done to the diplomatic alternative — it lost its credibility with the public. This situation has reached its height in recent months as the yearning of the chairman of the Zionist Camp, Isaac Herzog, to join Netanyahu’s right-wing government has been revealed. The public thinks to itself — and for good reason — that if Herzog is willing to serve with Netanyahu, where is the alternative, and what is his diplomatic plan? General talks about regional opportunities come and go, the public feels, and they sound like empty slogans. Just like Herzog sounded at his party’s meeting June 13, when he attacked Netanyahu with harsh words for the helplessness of “a leadership that hasn't been able to control a wave of terror for almost a year, and on the other hand is crippled by fear of diplomatic negotiations.'' Herzog added, ''I extended a hand. I was willing to pay a heavy price in order to grab a rare regional opportunity. Netanyahu missed the opportunity and leaves Israeli citizens with the sad and painful realization that we will forever live by the sword.”

These words have no credibility, since Herzog — in his very agreement to serve in the government led by Netanyahu — and head of HaHayit HaYehudi party Naftali Bennett admitted that he is not an alternative. The vague stories of Herzog about Egyptian President Abdel Fattah al-Sisi’s mediation and an initiative to restart the diplomatic process are not convincing. Indeed, Herzog could have promised that if Netanyahu made a significant diplomatic move the Zionist Camp would provide him with a safety net (at the Knesset, against a non-confidence vote). Even now, after the attack at Sarona, Herzog did not put the alternative on the table, as Peretz and Huldai did. He may be leaving the door open to enter the government, and he also understands that such talk is not electorally useful and chases away centrist voters.

Yesh Atid chair Yair Lapid is the most accurate politician in his dealings with centrist voters. He makes sure to keep up a rightist dance, certainly during a wave of terror. The day after the attack in Sarona, Lapid arrived at the site of the attack with foreign ambassadors, making sure not to attack the government, and to attack the Palestinians instead. He wrote on his Facebook page, “They celebrated yesterday in Ramallah, Nablus and Gaza. What did they celebrate? The death of a young woman who was engaged to be married in three weeks? The death of a father of children?”

And what is Lapid’s alternative to dealing with the wave of terror? What path does he offer the public? It is not clear. In any case, it is clear that whatever Lapid is doing is working with the media and in the political arena. He will not be caught putting the connection between the occupation and terrorism on the table.

It is important to note that the mission that opposition chair Herzog is confronted with is a complicated one, as few Israelis are currently open to any talk about a diplomatic alternative. So, when looking at the situation at this time, the sobering conclusion is that the classic worldview of the Israeli left on the need to strive for a two-state solution, and the connection between terrorism and the occupation, is becoming almost illegitimate. Statements that were part of the mainstream left only a few years ago are pushed to the margins.